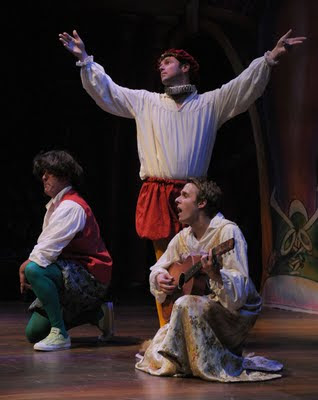 From left to right: Stephen Weitz, Geoffrey Kent and Matt Mueller in the Colorado Shakespeare Festival production of "The Complete Works of William Shakespeare (Abridged)." (Photo by Casey A. Cass for CU Communications)

If laughs are needed anywhere, it’s at a Shakespeare festival. “The Complete Works of William Shakespeare (Abridged)” is an idea whose time has come.

And where better than to stage it at the Colorado Shakespeare Festival!

Oh, wait, they put it on there last year.

Well, good job bringing it back!

As long as there’s been Bardolatry, there has been Bardophobia. Shakespeare is our sacred monster, and he provokes as much fear as awe. And much more sheer boredom.

Even the most ardent, arrogant iambic-pentameter-spouting smarty-pants gets tired of the Canon in his or her face from time to time. We have all toiled through mind-numbing English courses on Shakespeare, endured productions of his work so horrible that they warped space and made clocks run backward.

“Complete (Abridged)” is a cure for this condition. It’s a hilarious, breakneck dash through all 37 plays (OK, some merit only a mention) (and is it 38? Did he really write them? No time press on) staged by three fine clowns, Geoffrey Kent, Stephen Weitz and Matthew Mueller. That each is handling a role or roles in other CSF productions – hey, Stephen’s only playing Hamlet – is a testament to Rebecca Ramaly’s direction, their energy and the power of creative scheduling.

The Reduced Shakespeare Comedy started out at California Renaissance Faires in 1981, outclassing by a wide margin anything else that ever came out of a Renaissance Faire. Daniel Singer, Jess Borgeson and Adam Long condensed “Hamlet,” then gradually added “Romeo and Juliet” – then got greedy and dumped the rest in as well.

Years of touring and tweaking led to “overnight” success, and the brave adumbrators have since moved on to distill the Bible, American history, the Great Books, and so forth for a paying public.

The results are a riot. Whether you are the apotheosis of the cognoscenti or completely troglodytic, you will enjoy this show. The players tell you all you need to know (such as: Shakespeare invaded Poland in 1939?) and then illustrate their points with brio, a dash of insouciance and a big slice of ham.

And, to paraphrase Bobby Terrance, it’s the ham of truth. Like any cultural monument, Shakespeare needs the pigeon poop power-hosed off him from time to time. It’s centuries past the time a fresh conception of what Shakespeare was about existed. In many ways, we know him through a distorted, dirty lens. The buffoons of “Complete” pull out the funhouse mirrors instead. They have no agenda; they don’t care about analysis, criticism, or comment. They want us to have fun. They succeed.

Even the program’s funny. Make sure to read their section before the lights go down.

Kent’s clueless confidence, Weitz’s staggeringly long takes, and Mueller’s loony string of female roles (and antic vomiting sprees) mix with rapid-fire comic combat, puns, drag and more to keep things hopping. (There are a few jokes for the older set, so young children might feel left out of the fun at times, unless they are already dating and getting high.)

That being said, “Complete (Abridged)” IS fun, guaranteed. Go see it!

“The Complete Works of Shakespeare (Abridged)” is presented by the Colorado Shakespeare Festival on the campus of the University of Colorado in Boulder through Aug. 15. Ticket prices range from $14 to $54 each; however, there are discounts for multi-show purchases, CU students, staff and faculty; and those under 18. For more info, please visit www.coloradoshakes.org or call 303-492-0554.
at July 28, 2009