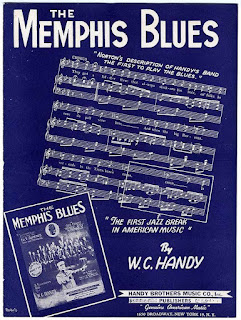 Somebody should make a movie about the life of W.C. Handy. Hang on; they did. Allen Reisner directed St. Louis Blues (1958), which featured Nat “King” Cole as William Christopher Handy (1873-1958), the self-acknowledged “Father of the Blues.”

Cole’s genius as a singer and pianist did not extend to acting, but he muddles through with the aid of a jazz lover’s dream cast — Ella, Eartha, Cab, and Mahalia, for starters. The music’s great, but the conflict is strictly good girl/bad girl, and Cole vacillates between the saintly Ruby Dee and the earthy Eartha. It all works out, and he ends up belting the title number in white tie and tails, in front of a full symphony orchestra. He is legitimized.

In fact, “Memphis Blues,” Handy’s first hit, his 12-bar big break, didn’t make it into the movie; the studio couldn’t get the rights. The fact that the song was still that valuable 46 years after it was published is a testament to Handy’s influence.

Handy’s father was a minister who thought that musical instruments were the devil’s playthings. Despite intense discouragement, Handy learned enough about music to lead and teach others. He began a pattern of teaching for a while, then working as a traveling musician. All the while he was listening.

Most significantly, he heard Prince McCoy. In 1903, a guitar-wielding, 20-year-old McCoy, backed only by mandolin and bass, was playing a powerful, rudimentary blues at a dance in Cleveland, Mississippi. Handy caught it, and registered the enthusiastic reaction of the crowd, who showered the players with coins.

One composition Handy heard was later identified as “I’m a Winding Ball and I Don’t Deny My Name,” which transmogrified into the better-known “Winin’ Boy Blues,” more properly “Winding Ball Blues,” the so-called theme song of Jelly Roll Morton, with an astonishingly unprintable set of original lyrics.

Another tune Handy copied was, in essence, “Memphis Blues.” It was a big hit, and put Handy on the musical map.

Here’s where we sail into the territory of cultural appropriation, authenticity, and plagiarism. Was Handy a plagiarist? Like many another cultural anthropologist, he was the first one to discover a phenomenon and transcribe it. As a working musician, he was obliged to play what people wanted to hear. The blues were hot, and he grabbed the opportunity and made the most of it.

But Handy needed to transform what he heard. By casting it into a reproducible form on staff paper, he defined what the 12-bar blues was — two repeated phrases and a closing couplet, moving from the root note to the fourth, twice, to the fifth to the fourth to the root, that satisfying round of chord changes that sounds so natural it seems to have been around forever.

It was also great dance music. Handy asserted that the dance stars of the day, Vernon and Irene Castle, created the foxtrot after hearing their music director James Reese Europe play “Memphis Blues.” They demonstrated the dance in their hit Broadway show of 1914, Irving Berlin’s Watch Your Step, and it caught on. Early jazz, blues, and ragtime were all well-suited to the new dance, which dominated ballrooms until the end of World War II. The blues as motor of motion.

The raw, gutsy heart of the blues was too wild for the mainstream, though. Arranger Edward Cupero had to score the tune for performance by a military band, and conductor Edward T. King was noted for his fussy insistence on sticking precisely to the score as written. The result: on this recording the tune plods along at a relatively steady beat, with just a touch of swing. It’s the blues in white tie and tails.