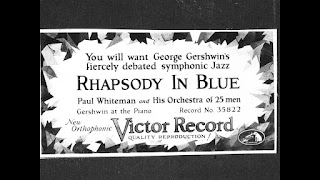 The first thing is to get the facts about the piece, laid out admirably here by Jim Farrington for the National Recording Registry. Evidently Gershwin had promised Whiteman a symphonic jazz composition for a big concert, then forgot. When reminded, he blazed into action. He wrote the piano score in three weeks. There was a problem. George had never scored for an orchestra before. The only “serious” scoring he had done had been his Lullabye for string quartet, in 1919. In stepped Whiteman orchestrator Ferde Grofe.
‘
Now, some context. “Symphonic jazz” already existed. James Reese Europe and his orchestra, who played proto-jazz, performed at Carnegie Hall in 1912. Up-and-coming composer/arrangers such as Fletcher Henderson, Don Redman, and Duke Ellington were already hard at work creating jazz for large ensembles.

However, Paul Whiteman, the “King of Jazz,” dominated the scene. Whiteman came from Denver, where his father Wilberforce was the long-time superintendent of music for the public schools. Whiteman’s classical training stood him in good stead, and he arranged thousands of tunes, creating tasteful and restrained renditions suitable for polite dancing. This “sweet” approach was immensely popular. Whiteman was determined to make jazz legit.

As Gershwin completed the score, he passed sections to Ferde Grofe, who could quickly make arrangements designed to maximize Whiteman’s musical resources. (Grofe would be known as a composer for his light-classical tone poems, such as Grand Canyon Suite).

Can we hear it with fresh ears? It’s certainly a different experience if you listen to the original recording. First, there was the limitation of the medium — they had to cram the piece onto two sides of one 78 rpm record. So, they cut a third of it and played the rest as briskly as possible (remember, they were still recording acoustically, so you must imagine the players all crammed around the sound horn).

It’s certainly exuberant. Gershwin’s playing is bravura, and the band’s performance leans into the syncopation with a manic intensity. You can really hear Whiteman’s influence in the unique globular, throbbing tones of his saxophones — their lugubriousness really works against the piece.

But it insists on itself, its melodies are unforgettable, its pace is compulsive. It’s been recorded thousands of times, rescored for all manner of ensembles and occasions. It literally animates Eric Goldberg’s Fantasia 2000 sequence. For me personally, it will always be that day I walked uptown in New York City in 1979 and heard it underneath the beginning of Woody Allen’s Manhattan. 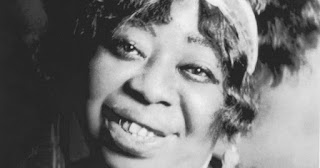 “White folks don’t understand about the blues. They hear it come out, but they don’t know how it got there. They don’t understand that’s life’s way of talking. You don’t sing to feel better. You sing ‘cause that’s a way of understanding life.” August Wilson, Ma Rainey’s Black Bottom

Gertrude Pridgett started performing in Georgia in 1900, at the age of 14. She sang in minstrel shows, circuses, and vaudeville houses. She was singing the blues as early as 1902, after she heard an anonymous country girl singing a lament for a man who had left her, and learned it from her. She married William ‘Pa’ Rainey in 1904, took his name, and traveled with him for a time before striking out on her own.

As Ma Rainey, she was a powerful and earthy early blues icon.

She was short and squat; some even called her ugly. “With her thick straightened hair sticking out in all directions, gold caps on her huge teeth, a fan of ostrich plumes in her hand, and a long triple necklace of shiny gold coins reflecting the blue spotlight that danced on her black sequined dress, Ma was a sight to behold,” writes Chris Albertson speculatively in Bessie.

And yet her voice poured out of her, and enraptured people. Said pianist and singer Champion Jack Dupree, “. . . when she opened her mouth — that was it! You forgot everything.” She is the antithesis of the idea of beauty of her time, and so was the music she made.

The mainstream (aka Caucasian) culture of the time treasured the sentimental ballad, the military march, the novelty song. The blues was different, and manifested itself differently. It rose up into the cultural conversation instead of being imposed on it from above, via the manufacturers of popular entertainment.

When Rainey heard the blues, she heard a song form that was still putting itself together, raised up from a crop of secular “sorrow songs” that stretched back to slavery days, branching off from sacred music and developing a style and features unique to itself. The blues filled a need the public only gradually woke to. In its heartiness, its emotional directness, its sense of authenticity, it delivered a new and powerful art form.

Here were real feelings, real issues, real life. And it wasn’t all about heartbreak. The subjects were far out of the realm of polite conversation, and included such forbidden subjects as sex, drinking, prison, drug abuse, violence, homosexuality, and death. Ma Rainey covered all of them, a transgressive figure to be sure. With her famous necklace and matching earrings made of $20 gold pieces, she registers culturally as a proto-rapper, addicted to bling. (In fact, performers of the time often put their nest eggs into wearable valuables, diamonds and gold, as these were easy to pawn and redeem in hard times.)

These laments were fueled by the alternately dragging and driving rhythms of the blues structure — a few simple, sturdy rhyme schemes and chord progressions could be bent with feeling, which anyone could pick up on and embroider themselves, a people’s music for sure.

The blues began to migrate into white culture around the turn of the 20th century, in the guise of large, earthy white women known as “coon shouters” for their imitation of black vocalists. Singers like Sophie Tucker, Emma Carus, and Julie Gerity could project sanitized sentiments in the strident, up-front blues style and accordingly were thought of as “red hot mamas,” as though proximity to African American style automatically and magically transformed them into sexual beings. In much the same way, white talent (whither Pat Boone?) tried to co-opt neutered black hits at the dawn of the rock ‘n’ roll era.

Mamie Smith beat Ma to the microphone. In 1920, Smith’s rendition of “Crazy Blues” sold more than 75,000 copies. Suddenly, there was a blues rush, and producers scrambled to sign talent — stars such as Ma and Bessie Smith, and a flock of others — Alberta Hunter, Sippie Wallace, Ida Cox, Victoria Spivey. Once Ma started recording, she kept busy, producing 92 recordings between 1923 and 1928, earning the sobriquet “the Mother of the Blues.”

In “See See Rider Blues,” Lena Arrant is credited as the composer; however, she contributed only the opening three couplets. (Lena was a fellow vaudevillian, a pianist who was half a double act with her husband Charles, who played the trombone with his feet). The body of the song is an old, traditional blues that shares some elements with Shelton Brooks’ 1913 “I Wonder Where My Easy Rider’s Gone,” a coded sexual lament that has evolved into “C.C. Rider,” “See See Rider,” and many other permutations.

Rainey’s voice is a mezzo-soprano moan, a brass funnel that could cut through the din of a smoky bar, or reach the rafters in the theater. In this recording, she is graced with accompaniment by the likes of Louis Armstrong and Fletcher Henderson, who add just the right touches. Meanwhile Rainey, almost offhandedly, vows

“I’m gonna buy me a pistol, just as long as I am tall
Gonna kill my man and catch the Cannonball
If he don’t have me, he won’t have no gal at all”

With shifting emphases and stresses that “send” the song.

By 1930, the first blues boom was over. Tastes changed; swing was on the horizon. Rainey retired, managed a couple of theaters, and died in good graces with the church. Her rebellious, bawdy legacy didn’t get its due until August Wilson’s 1981 play Ma Rainey’s Black Bottom brought her name back into the conversation. (And for a real treat, listen to LaVern Baker’s 1962 cover. The R & B star encapsulates the renegade energy of the early blues queens.)

Mother of the Blues: A Study of Ma Rainey
Sandra R. Leib
The University of Massachusetts Press
1981