Most of my readers know how my work is studded with perverse subject matter. A year ago, I completed a long project on a peculiar obsession of mine – people with dwarfism and their roles in high and low culture throughout history (“Midget Wrestling: A Pilgrimage” can be linked to here).

I was finally able to conclude that my shameless interest was motivated in part by my intense identification with the atypical, stigmatized outsider, although I am pretty sure I seem normal, to the level of unremarkability, to the casual observer. Whether there is truth in this or only pathology I will leave to others to figure out, if they care to. What is important are the many insights and personal understanding I felt I gained by exploring the topic – a story no one would buy, but was essential for me to finish.

One of the key works I cited in “Midget Wrestling” was one I had never had the chance to experience – the 1922 one-act opera by Austrian composer Alexander (von) Zemlinsky, “Der Zwerg (The Dwarf).” Finally, thanks to a number of artistic projects and concerns, I have heard and seen it. For me, it’s key not only in relation to my previous subject, but in and of itself as a great but generally unrecognized piece of music. 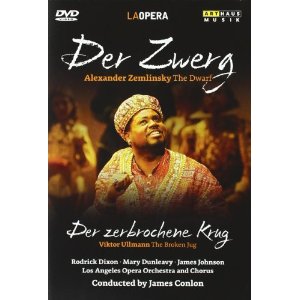 The recording in question is a DVD issued by ArkivMusic, released in October of 2010. It is the second half of a two-opera presentation by James Conlon and the Los Angeles Opera, part of Conlon’s lauded by recently discontinued “Recovered Voices” series of stagings, highlighting works by Jewish, modernist, or even broad-mindedly tolerant composers that were condemned and destroyed by the Nazis – including Krenek, Goldschmidt, Mahler, Korngold, Eisler and Hindemith.

The performance of Victor Ullman’s comic one-act “The Broken Jug” precedes “Der Zwerg,” which is fully staged and lovingly filmed.

Conlon’s incredible conducting skill and Darko Tresnjak’s spot-on direction bring this unjustly neglected and hard-to-find work to light. It’s based on Oscar Wilde’s short story, “The Birthday of the Infanta,” In it, a Spanish princess (of the era captured, complete with two court dwarves, Maria Barbola and Nicolas Pertusato, by Velazquez in his masterful 1656 painting “Las Meninas”) celebrates her 18th birthday. Among the “presents” she is given is a gift from the Sultan, a dwarf who has never seen his reflection and thinks himself to be a normal-looking man.

The laughter his figure provokes he thinks issues from the peace and charm he radiates. When the Infanta’s chamberlain threatens to whip him for not singing, he in turn offers to kill his would-be oppressor. When he does sing, it inspires the princess to declare her love for him, to dance with him first at the court ball, and give him a white rose from her garden. Although she is insincere and shallow, these shows of favor cause him to fall for her completely, declaring his love recklessly and demanding a kiss.

The Princess first attempts to order her servant Ghita to tell the Dwarf the truth about his appearance, but out of compassion she cannot. She asks him if he has ever seen himself. He admits that an arch-enemy, a grotesque yet impotent ghost, taunts him sometimes from polished marble, shining steel and watery surfaces, but that it is nothing. Stay away from the throne, she warns, and leaves.

The Dwarf doesn’t heed this advice. As mirrors around the throne room begin to enclose and surround him, he realizes that he is a monster, an abomination. The Princess returns. He begs her to tell him that she loves him, and that what he has realized is a lie. She, heedless of his intense agony, refuses and leaves. He collapses, and in the arms of Ghita, dies, asking for his white rose.

The ideas contained in “The Dwarf” sum up all the concerns that art and artists have given to the idea of the different and society, and its role within that society. The Dwarf has musical talent (the role here, sung admirably by Rodrick Dixon, is a taxing heldentenor part – ironically heroic), which, along with his lack of awareness, gives him value to those who “keep” him.

As he does not know his “place,” thinking and behaving as any well-adjusted individual would, the contrast between the court’s scorn and his vain dreams of love is harsh, heart-breaking. Once his “true” nature is revealed – that is, once he adopts and internalizes the consensual judgment of his worth and status, he self-destructs.

Zemlinsky’s treatment is oddly biographical. He took over and finished the libretto begun by Georg Klaren, and in many ways it reflects his relationship with the beautiful and mercurial Alma Schindler, his composition student who left him after only a few years partly due to her friends’ objection to Zemlinsky’s . . . ugliness. (She went on to marry and/or have affairs with numerous creative giants, including Mahler, Walter Gropius, and Franz Werfel.)

Zemlinsky’s intense identification with the Dwarf notwithstanding, the opera is powerfully compact, running at nearly 60 minutes and unfolding in a series of beautifully set scenes.

Musically, the work is a revelation. It’s popularly thought that Wagner, Mahler and the other late Romantics represented a dead-end in melodic composition that could only be supplanted by the extreme, audience-unfriendly experiments of twelve-tone, serialism, aleotorism, and countless other harsh, dissonant, atonal, theory-based isms of 20th century music (at least until the ebb of minimalism washed up Adams, Larsen, Part and others).

Zemlinsky, as did a few other individualists such as Britten, kept to a complex, densely layered sound that didn’t fear dissonance, but didn’t court it for its own sake, either. In “The Dwarf,” his lush style works hand-in-hand with the subject matter, expressive, dynamic and profoundly beautiful.

This production reminds that the acid test for any opera performance, live or recorded, is the quickening feeling of snap and flexibility in the music. Zemlinsky has it in spades, and Conlon's frequent recordings and stagings of his work certainly lend the proceedings a compassionate musical director who has a unique ability to illustrate this composer's intentions. (If that compelling sensibility isn't present, the show usually blows. Verdi was the best at muscling the audience through some stretches of bad libretto.) Zemlinsky knows how to move briskly, without seeming to rush. The Dwarf's luxurious, legato fantasy about holding the Princess in the garden contains wonderful depths of emotion.

As Zemlinsky’s protagonist is a three-dimensional, complex character, his demise is keenly communicated. He is a hero who is destroyed only because he can’t see beyond the scornful reflections shoved in his face by a society that can’t conceive of a normal soul in an abnormal body.
at April 04, 2012 No comments: 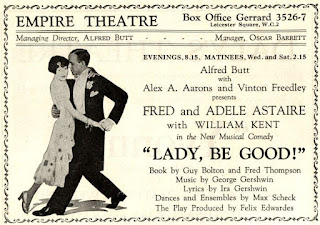