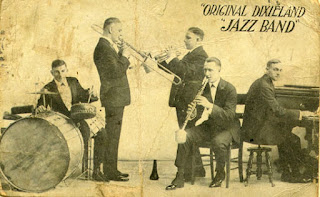 ‘Tiger Rag’
Composition origin unknown
Performed by the Original Dixieland Jazz Band
Recorded: March 25, 1918
3:11
Define jazz. Go ahead, give it a shot. Its very slipperiness, its looseness, its inclusiveness, its constant evolution and convolution, is perhaps a definition in itself. Robert Christgau termed it “inventing meaning while letting loose,” and that’s close enough for me.

The birth of recorded jazz is here with this squawky recording of five white guys playing music created by African- and Latin-Americans, an appropriation familiar to students of this country’s cultural history. To the uninitiated, it sounds like a riot in a music store – a raucous and random compendium of blatts and squawks, trills and slides, polyphonic discoordination. The mainstream initially characterized it as a fleeting novelty, nothing more.

Although the Original Dixieland Jass (later, Jazz) Band copyrighted the tune, its origins are much older. “Tiger Rag” had long been considered a “standard” by the early jazz bands in New Orleans, where it was born without historical documentation. It went by various names – “Weary Weasel,” “Number Two Blues,” “Play Jack Carey” (after the New Orleans trombonist who made his instrument growl), and others. It’s a mashup – various cels of repeated phrases that serve as templates, beds for improvisations, call and response, the fragmentation and juggling of notes among the players. (The Band originally recorded the piece on August 17, 1917, but they did so for Vocalion using a strange and soon to be outmoded vertical-cut recording process, instead of the familiar lateral, outside-in tracking that became standard.)

But there’s a through-line underneath, a strong, syncopated, swinging motor that drives an aggressive assertion of unity through diversity, a loose confederation of soloists sharing time and tempo. Jazz burst forth in a tepid time musically, drugged with delicacy, sentiment, and the insipid imitation of European song models. The only “stirring” music was written for marching bands. The bold, insistent assertion of “Tiger Rag” made it a hit.

The bearers of these glad tidings were musicians from New Orleans, brought up first to Chicago and then New York to capitalize on the sudden demand for hot music to dance to in tony nightclubs. When Cornetist Nick LaRocca, clarinetist Larry Shields, trombonist Eddie Edwards, pianist Henry Ragas, and drummer Tony Sbarbaro began their gig at Reisenweber’s Café in Manhattan in early 1917, they sparked a craze and started a musical revolution. Soon trainloads of Crescent City musicians were headed north to make some money and spread the new musical gospel.

It helped immensely that jazz was a vernacular music, rather than an art music that required years of training and a submission to an academic tradition and repertoire, dragged down into dullness through tradition and politesse. It was rough, crude, participatory, and eminently replicable, something you picked up “by ear” through participation and kept in unwritten “head arrangements,” a trial-and-error ethos that’s stuck with it to this day and kept it vital. With jazz there was freedom and a chance for the individual voice to soar – even if it had to roar above the other creatures in its pandemonious musical zoo.

“Tiger Rag,” covered countless times in countless ways since its debut recording, became one of the foundations of jazz development, along with other gems like “When the Saints Go Marching In,” “Indiana,” “Didn’t He Ramble,” “Careless Love,” “St. Louis Blues,” “Keep A-Knockin’,” and other tunes that would influence everything that came after them.