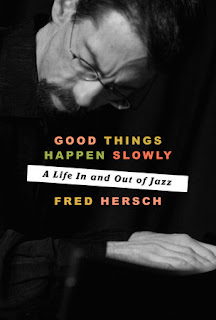 Good Things Happen Slowly: A Life In and Out of Jazz
Fred Hersch
Crown Archetype
2017

I was going to write this to you directly, but I thought if I published it, that it might lead more people to read your new autobiography. It certainly is good!

I have loved your music, both as a player and as a composer, for a long time. (Readers, in case you didn’t know it, Fred is an award-winning, killer jazz pianist and composer. You should listen to him. He has released solo work, and played with ensembles of varying size; he has also composed a lot of fully notated music that is -- well, you could say that’s art music or whatever, the main thing is, it’s GOOD.)

You are a little older than me, and we have some things in common. For instance, we both got to New York around the same time – although you stayed and I didn’t. It was great to read that your impressions of that nasty, smelly, rough, dangerous NYC of the late ‘70s and early ‘80s align with mine – and that we both loved it. Like you, I sat on the curbs outside the clubs I couldn’t afford to get into and listened, blown away, to the music inside.

Unlike you, I am not gay, but I lost my best friend to the first wave of AIDS, along with many other good and talented friends. Reading about your life with the diagnosis for going on 30 years now helps me immensely in understanding what he went through. It was very painful to bring all those memories back up again, but in a way good too.

Like you, and like many folks that I think will like this book, I have always felt ill at ease and different, yearning for acclaim and acceptance. Me? I performed comedy for years – now I write. Your writing here is great, too – clear and concise and straightforward, but evocative. I didn’t realize until I got to a certain point in the book that David Hajdu helped you out with it. He is one of my favorite non-fiction writers, someone I read and re-read to remind myself how to communicate on the page effectively. (Don’t worry – you do not sound like him, you sound like you. The best writing mentors help their pupils sound like themselves.)

Jazz really sustains me as a writer, the idea that you just have to swing with what you’ve got. And then you write: “In jazz, it’s individuality, not adherence to a standard conception of excellence, that matters most. . . . Difference matters – in fact, it’s an asset rather than a liability. There is no describing how exhilarating this epiphany was for me, as a person who always felt different from other people. In jazz, difference is the key element that makes artistry possible.” Amen.

It’s great to read about all these aspects of your life – how you approach creative projects, your struggles with addictions (I’m right there with you, again), and just the contours of the changes wrought by time and circumstance as they cut and shape your life and work. Thanks for being brave about putting all that down on paper – it certainly inspires me to be as rigorous. Didn’t someone once say that all the good stuff is hidden inside the pain?

I was sorry to read of your recent and intense health struggles. I am just coming out of a period of being physically and mentally ailing to the point that I was in bed for three months – nothing compared to what you went through, but nothing like anything I’ve experienced before. Reading those passages was an inspiration as well, although I’d just as soon we could all skip that shit and just have the inspiration straight. Still, reading about your perseverance came at just the right time for me. Thanks for the help.

And hey, I still have a ways to go before I get through your discography, but the one I’m most grateful for isn’t even on there. In 1999, you made, in collaboration with Beth Kephart and Art Lande (Art lives near me here in Boulder) Nourishing the Caregiver, which I found providentially at the time my mother was dying from cancer., and many nights when I couldn’t sleep after a day of taking her to her chemo I’d put it on and feel better. It’s the best medicine I possess.

Anyway, that’s basically it. As a creative person, and simply as a person, your book gets me where I live and makes me feel connected, not wrong, like I’m not so different after all. I think that if the world doesn’t grant you the feeling of fitting in, and if the impetus is strong enough, you can build an entire culture out of yourself, and it ends up being a gift that others can inhabit as well. I think that is exactly what you have done and are doing.

I hope you are feeling OK, being productive, and having fun with Scott. Thanks for everything!

The NRR Project #46: 'Swanee,' Jolson, and the problem of blackface 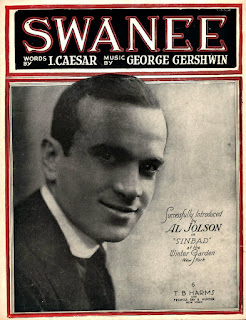 For decades, male entertainers in America had two things – a tuxedo and an Al Jolson impression. Anyone could get a laugh of recognition simply by going down on one knee and calling out “Mammy!” The World’s Greatest Entertainer was, for much of his career, precisely that.

Jolson was a performing marvel. At the time, vaudevillians and variety artists hid their hunger for audience approval under a veneer of stylish nonchalance. Compared to them, Jolson was a dynamo, a sweaty, energetic pulse of naked need. He had big, rubbery facial features and a resonant voice, both essential in being heard and seen in the farthest reaches of the cavernous, unamplified theaters of the day. He was one of the first to treat singing a song like he was acting out a three-minute playlet, to sing TO the audience, not just at it. His energy was an embrace that theatergoers felt obliged to return.

Jolson, the son of a rabbi, was born in Lithuania and migrated to America with his family at a young age. Motherless at age 14, he and his brother Harry began busking, singing in the streets for money. After 15 years on the road, Jolson finally opened a New York show as the lead in La Belle Paree in 1911. For then until his stage retirement in 1926, he was the number one theatrical attraction in the country.

He also worked in blackface. This was a holdover from the tradition of the American minstrel show, which had seen its heyday from the 1840s through the end of the 19th century. Although rapidly becoming an anachronism, the idea of a white man acting out the caricature of a black man was still strong in, and acceptable to, the general audience. Jolson excelled at “selling” songs, especially in wringing out all the pathos from sentimental ballads, especially those by Stephen Foster, which were written expressly for minstrelsy (“My Old Kentucky Home,” “Old Folks at Home”). Part of the license for acting out vulnerability and feeling onstage was, for many white performers of the era, came from adopting a concept of blackness that was inseparable from identifying it with childlike immaturity and a lack of emotional repression.

It’s painful now to see the incongruity of one ethnic minority mocking another to make itself acceptable to the mainstream -- A Jew playing a Negro for affluent white, largely Christian viewers. Jolson was not unconscious of the dilemma, and went out of his way throughout his career to befriend and stand up for black entertainers. Still, he made a fortune out of singlehandedly perpetuating a demeaning, stereotypical representation of blackness that otherwise might have died out much sooner.

At the edge of the Jazz Age, pop songs about the ‘dear old South’ were still big. The legacy of Foster and other sentimental balladeers was powerful, and the Victorian era was rife with maudlin nostalgia in vocal music. Odes to times past, the rural homestead, and the balms of motherhood filled the music racks of pianos across the land – particularly poignant in a time when the American population was moving rapidly from farms to cities.

“Swanee” is the archetype of that kind of song. Jolson had a hit two years earlier with the similar “Rock-a-Bye Your Baby with a Dixie Melody,” and a year later would score again with “My Mammy,” but “Swanee” was his biggest hit, selling two million records and more than a million copies of the sheet music. Perhaps what distinguishes it is its composer – George Gershwin.

The 20-year-old Gershwin wrote it for a 1919 revue, after which it languished until Jolson heard Gershwin play it a party (some say at a bordello). Gershwin had already been working for five years in Tin Pan Alley as a song plugger, one of many who would demonstrate and promote new pieces for performers and laymen alike. After the success of “Swanee,” his first and biggest hit, Gershwin would focus on composing for the stage and the concert hall for the rest of his short life.

The song is a perfect vehicle for Jolson’s style. Its lyrics are typically plaintive and yearning, but they are couched in a springy, energetic, propulsive melody utilizing percussive block chords. It is not played as much as it is stamped out on the keys. The opening phrases charge up the scale – “I’ve been away from you a long time/I never thought I’d miss you so”; the next are framed in melodramatic staccato –“Somehow I feel/Your love was real/Near you I long to be.”

For the chorus, the shift from minor to major key brightens the tone, the repetitive “Swanee, how I love ya, how I love ya” like a freight train chugging along. Gershwin makes a narrative out of the piece, again turning to stair-step phrasing – “I’d give the world – to – be/Among the folks – in – (and the payoff, in a falling phrase) D-I-X-I-E . . . “ It’s easy to remember, infectiously singable.

The bridge brings in quotations from earlier songs – the explicit “I love the old folks at home” phrase from Foster, but also in its use of a subtle musical paraphrase of “Listen to the Mockingbird,” an 1855 gem, which can easily be hummed along in harmony with “Swanee, Swanee/ I am coming back to Swanee.” (If remembered at all today, “Mockingbird” is as the opening theme music, in parodic form, for the Three Stooges shorts.)

By song’s end, it’s become a triumphal celebration of return, a glorious anticipation of trouble no more, almost a march. No wonder it was a hit. Despite its racist connotations, you can’t deny it’s a nifty piece of work.

Jolson gradually weaned himself away from blackface, but not before performing in it in the first sound feature film, The Jazz Singer, in 1927, and again and again in special appearances in film and on radio.

At his memorial shrine at Hillside Memorial Park in Los Angeles, a bronze statue of Jolson shows him on one knee, hands spread, just as he posed on stage at the end of belting his crowd-pleasing songs. You can’t tell if he’s wearing blackface or not. 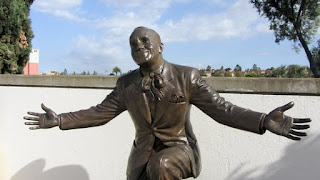