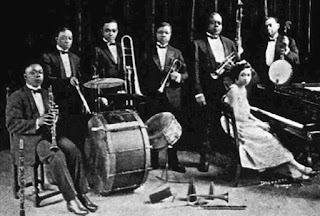 Jazz is one of the musics that grew up during the recording era. That makes it a marvel for obsessives. The history of the genre can be played through speakers, savored, analyzed, studied, built on. Every development, each branching, is there. You can eavesdrop onto the creative process, catch the improvisation live as it happened, feel the tone and color of each player’s voice. It’s a fascinating mania.

That’s why, when a jazz broadcaster announces a set, you’ll hear details such as when and where the session was, and who played on it. Each unique combination of people and circumstances makes a difference. Unlike the Western music that came before it, much of which was predicated on the exact replication of written compositions, jazz was free and easy. In jazz, oeuvres are founded in track listings.

This entry is a perfect illustration of that. In it, we hear the top jazz showman in the country at the time, the great cornetist Joe “King” Oliver and his Chicago ensemble, featuring a new arrival in town, a rustic but compelling young brass player named Louis Armstrong.

Oliver developed as a musician between 1908 and 1917 in New Orleans There were three primary gigs for professional musicians there — in marching bands, dance halls, and whorehouses. Oliver’s forceful melodic line, allied to his mastery of mutes, made him the undisputed master of hot music in town, and his band with trombonist Kid Ory played everywhere. Meanwhile, Oliver kept an ear out for his rivals, and for up-and-comers. He identified Louis Armstrong’s ability early and took him under his wing.

Then things changed. The red-light district of New Orleans, Storyville, was closed down when America entered World War I in 1917. At the same time, the Great Migration of African-Americans from the rural South to the industrial North was swelling. Oliver moved to Chicago and put together a jazz ensemble there, becoming just as prominent as he was in his old home town. To Ory in New Orleans, he recommended that Armstrong take his place.

In early August 1922, Oliver sent for Armstrong, and the lineup of King Oliver’s Creole Jazz Band was set. They were the hit of the region, with a home base at Chicago’s Lincoln Gardens. For two years, the outfit swung together, creating a few dozen recordings along the way.

It is devilishly hard to recapture what the impact of this music was. No one had heard anything like it before. It was sassy and energetic, rowdy and raucous, urgent, full of life. (To detractors, it was frantic chaos.) It made you want to dance, and that’s primarily what it was for — at this point in jazz history, only devotees and aspiring players actually sat still and listened to the intricacies of the music, trying to decode its slashing polyphonies.

At this point, all jazz was in the style what would later be termed Dixieland. Over a percussive thump of bass (in this case, banjo), drums (here the drummer was reduced to woodblocks), and piano, a “front line” of winds and brass played. A primary front-line instrument played the melody, as the other musicians improvise harmonically around the melodic line at the same time. Here Oliver and Armstrong trade phrases while clarinetist Johnny Dodds expertly weaves a countermelody through them. The result is hot jazz, what Armstrong termed a “gassuh.”

Armstrong would play with Oliver for two years. During that time, he divorced his first wife and married the female member of Oliver’s band, the accomplished and ambitious pianist Lil Hardin. It was her who convinced him to leave Oliver and strike out for New York in 1924, where he would find world-wide fame as jazz’s first great soloist.