The NRR Project #2: The first recording of a live performance 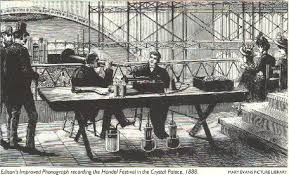 The great inventor Thomas Edison, the Wizard of Menlo Park, invented the phonograph in 1877, and patented it the following year. It was a fragile assembly. It consisted in its original form of a horn attached to a pointed stylus. The stylus touched a revolving cylinder coated in tinfoil. The vibrations created by the sound moved the stylus, which inscribed those vibrations as waves onto the tinfoil. To play back the sound, the cylinder was started up again, the stylus placed in the groove made originally — and out came an extremely crude reproduction of the original sound.

Then Edison got busy with the electric light bulb and forgot about it. Edison the inventor was extremely attuned to the marketing potential of his inventions, and he saw the phonograph as a conceptual dead-end. (His fight against the superior competing alternating current created by Nicolai Tesla included electrocuting an elephant on film.) Until Edison’s competitors had improved the phonograph to the point which it became a commodity, he could see no use for it.

Once he could, however, he got busy. First, as the new technology as expensive, he had to figure out how to market it to consumers with sufficient capital — that is, the rich. He needed to introduce his potential customers to the item, and he had to make them want to buy it. In addition, he need to collect sounds that people would want to buy.

To kill two birds with one stone, he enlisted his agent in England. Col. George Gouraud was a Civil War veteran and Medal of Honor winner who represented Edison’s commercial interests in Britain. Gouraud lived in a mansion in south London outfitted with all the latest Edison contraptions; as such, it was dubbed “little Menlo.” Once he’d received a shipment of equipment, Gouraud began hosting “phonograph parties” — dinners after which Gouraud would demonstrate the machine.

Of course, Gouraud invited only the cream of society, and so the wealthy and the titled were the first in England to speak into the horn and to hear their recorded voices. The novelty inspired many of the affluent to buy this new toy, and word literally got around. Gouraud created a desire that drove demand. Gouraud made sure to invite the celebrated to record as well — poets Robert Browning and Alfred Tennyson, actor Sir Henry Irving, Crimean War nurse Florence Nightingale, and composer Arthur Sullivan.

These artifacts were instant commodities. To date, mankind had foxed the limitations of time and space only with books, written music, and other tangible forms of art. With the phonograph, photography, and motion pictures now anyone and everyone could, theoretically, both “live” forever and be seen and/or heard by anyone and everyone on Earth. Gouraud was building up the world’s first audio catalog.

In this instance, Gouraud visited the big Handel festival at London’s Crystal Palace that summer and brought his phonograph with him. Handel’s 1739 oratorio Israel in Egypt was on the bill, featuring an orchestra of 500 and a chorus of 4,000. Sitting in the press gallery 100 yards away, Gouraud gathered the sounds as best he could.

The results are almost impossible to make out, unfortunately; the wax medium used to capture the vibrations was basically candle wax. Later, firmer and more resilient materials would come into play. However, the diligent auditor can identify the passages with careful listening. The most important thing to mark here is that this was the first time a live performance was recorded – the beginning of a quest to get the sounds of the world down for posterity.

The NFR is one writer’s attempt to review all the films listed in the National Film Registry in chronological order.