As discussed in the last NRR Project entry, Thomas Edison was all about finding a profitable use to which to put his inventions. Here’s one of the terrifying consequences of that impetus – the Edison Talking Doll.

For decades, clever arrangements of bladders and reeds in doll bodies had created the culturally familiar talking doll – one that exclaimed “mama” and flipped open its eyes when stood. Edison dreamed of dolls speaking with children’s voices, even telling stories to them, and animal toys with real barks and whistles.

Here’s how the Edison Talking Doll worked. A small tin or wax cylinder capable of 12 to 15 seconds of recorded sound was housed in the torso of a child’s doll. Hand-turning the playback crank would play the recording of a nursery rhyme. The eight surviving recordings feature “Twinkle, twinkle, little star,” “Hickory dickory dock,” Jack and Jill,” “Little Jack Horner,” “There was a little girl,” and “Now I lay me down to sleep.” The National Park Service is the ne plus ultra for info on this, including recordings.

The recordings were individually, by young women using children’s voices. The effect is past unnverving – plaintive, scratchy voices like the kind you hear in the horror film right before the doll stabs you. Given our uneasy associations with dummies, automata, mannequins and the like, it’s not surprising these dolls were not as appealing as they were conceived to be. 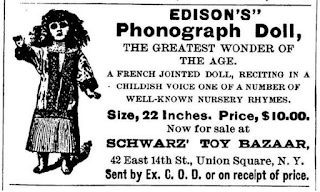 Other problems – the hand crank meant that the playback was uneven and warped if not turned careful, the cylinder wore out quickly, and they couldn’t be switched out, either. Most reviews of the day classified the playback as unintelligible. Patrick Feaster’s masterfully thorough essay on the subject can be found here.

It’s useful to consider this dead end. Edison was constantly throwing off ideas, like sparks off a flywheel. His laboratory was an immense research and development complex. The persistent inventor and entrepreneur wasn’t afraid to spend some money to test a product’s viability. Decades before Teddy Ruxpin came long, Edison abandoned the project, buried the recordings in a field, and sold the dolls. Scant few remain to tell the story.

Around the World on the Phonograph
Thomas Edison
October 1888

Thomas Edison was one sharp operator. His first patent was for a vote recorder – which no one bought. Why? Because it made it harder for politicians to steal elections. The lesson Edison took from this was to focus on inventions people wanted. In this, he was far more than an inventor – he was an entrepreneur, a self-promoter. It seems fitting, then, that his should be the first recorded voice we are intended to hear.

His cylinder recordings are the first commercially feasible ones. Sound conducted through a horn vibrates a diaphragm, which in turn moves a stylus; the stylus etches the resulting groove into the spinning cylinder. Reversing the process by spinning the cylinder again and placing the stylus in the groove allows the sound to replay via the horn.

Originally, the musician or speaker had to stand in front of the horn all day, repeating the performance, in order to make copies; eventually, mechanical multiples could be produced, but the loss of sound quality was great. Cylinder coatings went from tinfoil to wax to cellulose to plastic, until cylinders lost out to cheaper, less bulky discs. The number of effective playbacks in a cylinder went from fewer than 20 to 100 or more – another reason to switch to the more reliable, if more brittle, disc records. 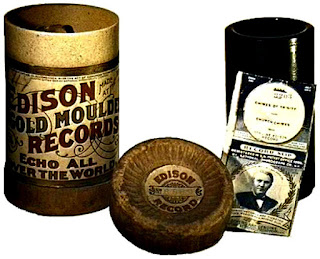 Here Edison promotes not only his invention but himself, the genial but commanding science-magician, the “Wizard of Menlo Park.” He describes the kind of round-the-world journey that could only be contemplated by people well-off enough to afford his new invention – Edison knows his new toy will best be marketed to the leisure class.

Edison relates a string of cities this imaginary journey takes him through – Liverpool, London, Calais, “Paree,” a litany of destinations the smart traveler would not miss. Edison cracks a joke about being laid up with cholera in “Bombay” for a few weeks, and continues through Singapore, Hong Kong, Tokyo, and so on back home. This is the itinerary of the Cook’s Tour, the pioneering travel agency of the 19th century. In the wake of the “Grand Tour” usually taken by upper-class travelers in Europe for 200 years, package tours such as Cook’s and others starting mining the pockets of the culturally and socially ambitious nouveau riche and expanding middle class. The Internet Archive has an excellent recording of it here.

Edison is selling not just a product, not just a process, but an assumption that he’s discussing a common, and reachable, aspiration. He’s selling a vision of a wider-ranging life.

Phonautograms
Edouard-Leon Scott de Martinville
c. 1853-1861
Though not officially listed as first in the Registry, this pivotal set of recordings was brought to life 149 years after they were made. It’s only natural, I guess, that the first recorded sound would be someone singing a dirty song.

Edouard-Leon Scott de Martinville, who invented the phonautogram, was not looking to make what we think of as a recording, something you “play back.” A bookseller turned amateur physiologist, he sought to reproduce, make visual, sound waves as they affected the eardrum. To this end, he attached a boar-bristle stylus to the narrow end of a container, leaving it just touching a soot-blackened cylinder on a screw. Shouting, singing, or playing into the concave sound-catcher, the vibrations would be crudely transferred onto the paper. 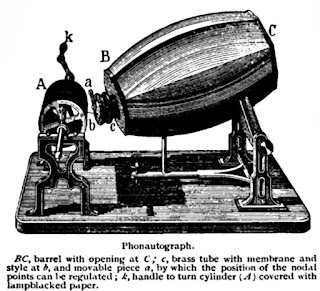 Scott was aware of the archival possibilities, and saw in the tracings a kind of code too be codified and interpreted, but by the naked eye, not via mechanical reproduction. “Will one be able to preserve for the future generation some features of the diction of one of those eminent actors, those grand artists who die without leaving behind them the faintest trace of their genius?” he wrote.

Members of the incredibly helpful site FirstSounds.org conceived and spearheaded methods of digitally reading and reproducing high-resolution copies of the original lampblacked prints. The result is handful of precious voices from 1860.

Interestingly, they are readable today only because Scott included some 250-Hertz tuning-fork calibration tones, a simple but effective way to insure a constant reading rate. If the tone doesn’t waver, the recording is running at correct speed. A few earlier phonautograms he made, from 1857, can’t be interpreted because no one knows at what speed or speeds (the recording device was hand-cranked, adding more variables to the problem) they were recorded.
The first sound, from April 9, 1860, is Scott singing “Au clair de lune” (“By the light of the moon”), a familiar French folk song from the 18th century, the lyrics of which turn to double-entendre pretty quickly. Someone needs a pen, someone’s fire is getting lit, and a guy and a gal get it on. Nice. FirstSounds's top-notch site  houses all the recordings of Martinville's work. As acoustic scientists worked on the project, there is plenty of precise, helpful data to be found.

The key to understanding pre-digital recording technology is the imaginative leap of analogy. Sounds are waves, invisible but waves nonetheless, in evidence like the tide against the shore, or wheat rolling and rippling in the summer wind. They are palpable, capable of measurement and description. Looking at an enlarged segment of phonautogram, it resembles nothing so much as calligraphic brushstrokes on rice paper, furrows on a hillside. Like an animal's track, sound leaves its wake in a medium that captures it, freezes it forever -- or until the medium is lost.

Even from an attempt this crude, we receive a message. No wonder it once was considered akin to magic. It’s a haunting kind of time travel. 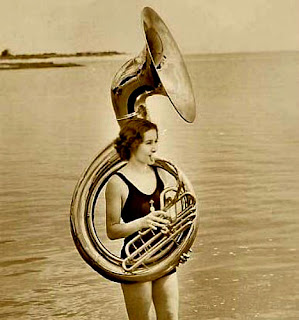 What sounds do we want to remember?

For many years, the National Film Registry has drawn attention to its annually-expanding list of movies deemed culturally, historically, or aesthetically significant. A few years ago, in addition to all the other writing I’ve done, mostly about the arts, I began what I thought was a unique pursuit – to find, see, and review every film on the list in chronological order. As of 2015, 675 films are on that list.

Of course, in my research I found Daniel Eagan’s admirable and comprehensive 2009 book “America’s Film Legacy,” which is precisely that. His monumental effort notwithstanding, however, I decided to press on. Just cussed, I guess. I am still forging ahead – you can track my progress at Film Patrol, through my NFR Project. If nothing else, it’s providing me with quite an education and a lot of food for thought.

What better way to do that than wade through them, in order, as with the National Film Registry? The recordings are well-documented by the Library of Congress, and each is given a brief but insightful description by a scholar – an excellently curated project.

So why continue? Just cussed, I guess. I think that this kind of journey through time will be another enlightening one. I haven’t looked through the list extensively. I don’t know what I’ll find, or what I’ll think of it. What will I hear? Why is it there? What does it mean?

More practically – where can we find these recordings, if at all? Why are they not compiled and collected in a public digital space so that everyone can learn about them, exchange ideas about them, and let them inspire new work?

The fact that the Film Registry gets all the press begs the question as to whether we are primarily a visual culture or not. Film has its own universal language of sign and gesture, but what about sound? Does it resonate with us as deeply as image?
Let’s listen and find out.