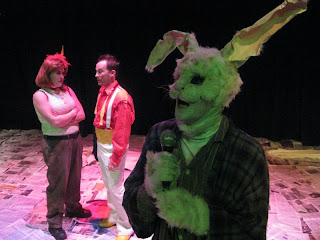 
We have moved into full-on hallucinatory territory.

Buntport’s final production of its 10th season is “Jugged Rabbit Stew,” an original musical that is fascinating, entertaining and thought-provoking in the Buntport tradition.

Except that there is no tradition. Every time it seems that the collaborative is about to lapse into a house style, the group subverts itself, turns its approach inside out, pies itself in the face. In a culture where art and entertainment is churned out with assembly-line predictability, Buntport keeps things fresh and alive.

Just as Buntport is a theater in the existential sense that it’s a group of people that explores the human condition live onstage, “Stew” is a musical in that it contains songs. Everything else is up for grabs. The plot is marginal, the characters are, literally, fragmented, tangential speculations abound, and in the end the whole contraption just kind of drives off the edge of a cliff.

The central figure is a giant magical rabbit, played by Erik Edborg, clad in ears, paws and anger, chugging booze from a hutch’s water dispenser. He is the deus ex machina – ruling the others on stage like a sociopathic Harvey, or the furry, fanged Frank from “Donnie Darko.”

His victims/cohabitants in his newspaper-lined rectangle of a room are his magician, Alec the Amazing and All-Powerful (Evan Weissman), magician’s assistant Mystical Marla (Hannah Duggan), Erin Rollman as a Woman suspended in space, along with a handful of props, above the stage for the length of the show, and Brian Colonna as Alec’s missing right arm. 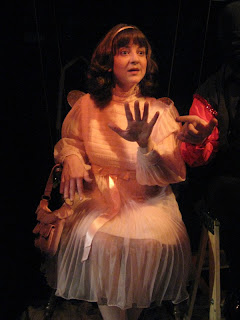 The score is by Adam Stone, who previously collaborated with Buntport last year on another original musical, “Seal. Stamp. Send. Bang.” He’s a facile composer who’s conversant in the modern musical style – flowing, pop-catchy, swooping ballads – as well as genre pieces (for instance, a gentle country/Western ode, “Hand in Hand”).

More importantly, you can tell from his writing and arrangements that his skills are extremely broad and deep: his work simultaneously reinforces the form’s traditions and asks pointed questions of it – for instance, how do you make rhymed couplets out of the chaotic premise, and singable ones at that?

Yet, Stone and Buntport do so – like Cole Porter on acid. Buntport’s members can sing, too, which is a more complicated task than the layperson might think. Besides staying tuneful and in key, a musical performer has to sell the number, stay in character, move through choreography . . . and breathe. Daunting, but they do it. And numbers such as “When Love is There to Blind You,” “Take Me, Break Me, Make Me Something More,” and “That Special Hare” are stand-alone good.

(Um, confession – I have been playing the cast album in the car and singing along . . . loudly. That’s an endorsement – CDs are available for purchase in the lobby!)

There’s no plot to summarize. Every character suffers from incompleteness. Everyone wants to be something else -- as one lyric states, "To be the version of myself/That I want the world to see." Amazing Alec’s right arm states, “I don’t have a pocket – that’s my tragic flaw,” and most of the others mull over the tragic-hero state and the fate implied for such a figure during the show. Death, fate and love are the themes here, and they are covered from a multitude of angles as the show careens forward.

Mystical Marla sports the bottom half of a car mechanic, thanks to Snowball’s magical wrath. Ditto for Alec, who can’t do much prestidigitation without his missing limb. Meanwhile, Arm (Colonna somehow performs covered in black, save for his brightly clad appendage) falls in love with Woman; everyone is at odds with each other, and all clamor for love and resolution from Snowball, who can only perceive himself as prey.

The abrupt and brutal and artfully staged conclusion still has me wondering what the hell happened. In honor of it, I won’t offer the usual sweeping statement or grandiose deduction or satisfying summation that form the final-paragraph-ending "kicker" of a review; "Stew" is a good, thought-provoking show and you should go and experience it.

Excuse me, I need to go drive around and sing now.

“Jugged Rabbit Stew” is presented by Buntport Theater, , through June 19. Performances are Thursdays, Fridays and Saturdays; a 3 p.m. matinee takes place on Sunday, June 13. For tickets and information, please call 720-946-1388 or visit buntport.com/reservations.
at June 10, 2010 No comments: