From Boulder Magazine: I write on eTown and 'creating a third place' 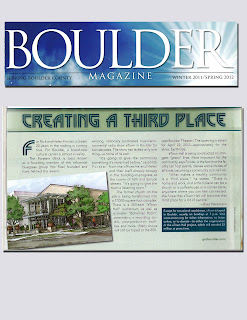 Story by me from the new issue of the regional quarterly on the new digs for the popular, long-running music and social action show --

For Nick and Helen Forster, a dream 20 years in the making is coming true. For , a brand-new cultural center is almost a reality.

The Forsters (Nick is best known as a founding member of the influential bluegrass group Hot Rize) founded and have helmed the award-winning, nationally syndicated music/environmental issues radio show “eTown” in Boulder for two decades. The show has lacked only one thing – a home of its own.

The former church on the site is being transformed into a 17,000-square-foot complex. There is a 200-seat “eTown Hall” auditorium, as well as a smaller “Bohemian Room” downstairs, recording studio, post-production facilities and more. The opening is slated for April 22, 2012 – appropriately for the show, Earth Day.

eTown Hall is being constructed on stringent “green” lines. Most importantly for the community, says Forster, is the fact that the facility can host events, classes and activities of all kinds, becoming a community cultural hub.