'The Almost Nearly Perfect People': Bustin' on my Scandinavian homies 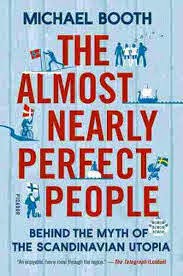 The Almost Nearly Perfect People: Behind the Myth of the Scandinavian Utopia
By Michael Booth
2014
Picador
New York

Now I know why we left the old country.

Michael Booth’s new survey of the Nordic lands is a feisty, funny, trip that enlightens as it entertains.

The English travel and food writer has a long-standing connection to Denmark through his wife, and the book originated in his chagrin at Denmark’s consistent rating as the world’s happiest, most progressive society. “They don’t look that happy to me,” he thought, and what results is Booth’s frank and acerbic levering up of the great assumptions about these cultures’ superiority to take a peek at what squirms about in the shadows beneath them.

As he travels through Iceland, Denmark, Norway, Finland, and Sweden, Booth does an admirable job of blending reportage, anecdote, and historical contextualization to present a balanced sketch of each society. This is a tricky business – Booth plumbs the national stereotypes for validity, and confronts his own ingrained generalizations, revealing a much bumpier, more complex reality.

Not that this is an expose or stab job. Booth is keen to remind the reader that in a world where poverty, conflict, disease, and injustice are par for the course, the problems of the highly developed, affluent North are relatively minor. Additionally, he espouses the virtues that makes these societies work – “trustworthiness, accountability, openness, a strong civil society, long-termism, individual self-control.” However, those of Scandinavian heritage raised with an intimidating sense of where they came from will find this study a big fat relief -- as some of these stereotypes are all too grounded in fact.

For instance, it seems that Danes are not the most happy, they are simply the best at pretending that everything is just fine. The Norwegians come off as not-too-bright, right-wing tribalists rendered effete by their vast oil revenues. Iceland? Vikings led astray into modern financial incoherence by their piratical tendencies. Finland is portrayed as composed of tough, taciturn binge-drinkers. And Sweden, the economic leader of them all, is a stultifyingly conformist culture, the ultimate nanny state, with an enormous immigrant problem.

In fact, the problems of multiculturalism crop up again and again in “Almost.” These host cultures are incredibly homogenous, not just culturally but genetically. The need for workers willing to do the mundane tasks that keep things running falls more and more to refugees, and inclusive philosophies are being tested now up North, with intermittent success. Enforcing tolerance and avoiding racial stratification is the new challenge.

The overall sense that Booth leaves the reader with is that, like a typical American suburb, Scandinavia is a nice place to be from. The traits I thought were my family’s alone are more broadly based. The aversion to conflict, the lack of emotionality, the stiff politesse, the smugness, the non-specific gloominess, the nagging sense of personal unimportance, the shyness, the yearning for universal approval, and wielding relentless, lethal niceness as a weapon all are found among the people Booth meets on his way.

Booth quotes journalist Niels Lillelund --“In Denmark we do not raise the inventive, the hardworking, the ones with initiative, the successful or the outstanding, we create hopelessness, helplessness and the sacred, ordinary mediocrity,” and The Economist – “Scandinavia is a great place in which to be born . . . but only if you are average. . . . if you are extraordinary, if you have big dreams, great visions, or are just a bit different, you will be crushed, if you do not emigrate first.” Why leave heaven? Well, if for you it's hell.

The idea that these “perfect” societies tend to iron out or exclude the unique, eccentric, and enterprising individual makes me understand why my dissatisfied, grumpy, free-thinking ancestors got the hell out of there. Hans Christian Andersen’s “The Ugly Duckling” has more than a dollop of truth in it. Of course, Booth's observations have stirred debate, as they should. "Almost" is great look below the surface.
at March 30, 2015 No comments: