Here’s the thing. Traditionally, in Judaism, instruments are not played on the Sabbath – songs of praise are sung unaccompanied, usually to tunes, also known as prayer modes, in use for centuries. But hey, what culture doesn’t have music in it? And at weddings, parties, and the like, bands of musicians would play what developed into klezmer -- a vital, emotional, dance-oriented music that developed in the Jewish communities of Europe during the 19th century, a hybrid of Romani, Turkish, and Russian influences, steeped in the melodic modes of the prayer services.

Here’s the first surviving recording of the genre made in America. It’s credited to Abe Elenkrig’s Yidishe Orchestra, about which not much is known. Abe was a barber, and played trumpet and led an ensemble on the side, performing for social occasions. The 10 sides he and his outfit recorded for Columbia shine light on the genre during one of its most obscure periods.

“Fon der Choope” (“For the Wedding”) is a typical klezmer piece (ironically, the term wasn’t used until the 1980s – until then it was known as Yiddish music), the typical ensemble consists of trumpet, clarinet, violins, flute, accordion -- portability for traveling musicians. The high, keening melodies, based on sacred phrasings known as cantillations, give the music a penetrating feelingness.

The recording is fascinating in that it captures the music before jazz began to influence it. The first recording of jazz was four years away, and once it enters the picture it begins to perlocate into klezmer – and vice versa. A lot of the minor-key work, the vocal-style inflections, and the forthright emotionality found its way into early jazz, via practitioners such as Dave Tarras. Naftule Brandwein, and Ziggy Elman (Elman’s 1938 klezmer instrumental “Fralich in Swing” was Caucasianized into the hit song “And the Angels Sing” a year later.)

However, mainstream American Jewish culture was more interested in assimilation at the time. It wasn’t until the late 1970s that the Klezmer Revival took place, which revived traditional approaches and inspired new hybrids as well. Now klezmer is inextricably wound into the DNA of American music – aren’t you glad? 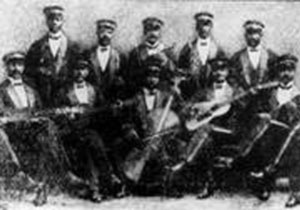 What makes a music catch the ear of the public? Why this and not that, then but not now? Four years before jazz exploded onto the American scene, calypso came ashore.

It came in the persons of the uniformed members of Lovey’s Trinidad String Band, wielding waltzes and syncopated, swaying paseos. Trinidad and Tobago in the Caribbean was a hotbed of music generation in the 20th century, and calypso was one of the genres. It was a full-bodied, orchestral kind of Afro-Hispanic dance music, based on violins and guitars, with some percussion and a few wind instruments thrown in for accents.

What makes calypso unique is its lyrics, none of which hare found on the Lovey (aka George R. Baillie) recordings. The rhythm in most calypso songs serve as a backdrop for freewheeling, improvised verse – extempo --, usually about sex, politics, or some other controversy. Sounds like rap? It’s a distant progenitor, whose offspring and relatives include The Dozens, toasting, and sanankuya. Calypso spread the news, lyrics were debated and records were banned. Without that edgy, alive word-battling aspect, these first known recordings of calypso are intriguing, but not riveting.

Lovey’s toured New York in the summer of 1912, and made exactly two dozen recordings, which can be heard on a finely curated compilation by Bear Family Records. Calypso’s singers would begin to record bodies of work in the 1930s, and in 1956 Harry Belafonte would spark a worldwide (and extremely sanitized) calypso craze with his recording of “The Banana Boat Song.” 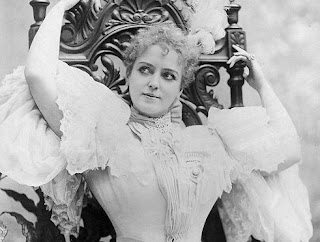 This recording is the rarest of the rare – an unreleased test pressing discovered 31 years after it was recorded. It captures the presence of a lovely and talented link in the history of celebrity culture – the legendary Lillian Russell, the first American “sex symbol.”

Like her 19th century predecessors Lola Montez and Lillie Langtry, she first won praise as a performer, then as an ideal beauty and glass of fashion. Finally she was celebrated simply for being herself – set so firmly in the minds of the public that she had endorsement deals.

She was the daughter of a newspaper publisher and a writer/feminist. She studied voice with the great Leopold Damrosch, and despite her mother’s disapproval she was soon the best-known singer of operetta in the country. She was classy, charming and voluptuous, embodying the ideal Victorian female figure -- large-bosomed, corset-cinched, topped with a round, cherubic face.

Like many prominent female performers, she had a tumultuous personal life, studded with four marriages and many affairs, mostly with rich and powerful men. Newspapers tracked her incessantly. When Alexander Graham Bell initiated long-distance telephone service in 1890, Russell sang over the line.

“Come Down Ma Evenin’ Star” was written for Russell by composer John Stromberg for her starring role in the popular 1902 review Twirly Whirly. He held it back from her, saying it wasn’t ready. He committed suicide weeks before opening night, and the music for the song was found in his pocket. His lyricist put words to it, and it became Russell’s signature song.

It’s a sweet, wistful ballad of yearning, of a kind just ready to fall out of favor. Its sentimental strains were the last delicate gasp of the silk-and-lamplight niceties of the period. Russell made this recording in 1912, a decade after it became a hit, and eight years after Russell had stopped singing (but not performing) onstage.

Why did Russell record it? Significantly, she never allowed herself to be recorded live save for this disc, and a handful of film snippets. She didn’t need the income, certainly, being financially independent. Or the publicity. Perhaps she listened to the recording playback and found, like so many people, that her voice was unbearable. (She is a bit nasal and strained here.)

Interestingly, though, her performance here is technically top-notch, warm, clear, and expressive. It verifies the abilities of performer lost to popular consciousness, remembered if at all as a “sex symbol.”