What scares you the most? Is it watching the latest horror film? Reading a Stephen King novel? For me, it’s listening to old-time radio.

I’ve been listening to vintage radio since I was a kid, ever since my dad snapped on the radio one Saturday and ran across the amazing local broadcasts of radio historian John Dunning. I listened faithfully for years, following John from local station to local station as he spoke about and played comedies, dramas, variety shows, band remotes . . . and thrillers.

Radio as a diverse and engaging dramatic medium only lasted about 30 years in the U.S., though it is still strong and innovative in Britain (BBC Radio 4, anyone? I have it bookmarked). The rise of the podcast has reignited interest in narrative audio, and even triggered new attempts to enact stories on the air. And, the ubiquity of the internet now means that all those old shows I had to make appointments to hear can be dialed up instantly; much of my listening day is still spent exploring the Golden Age of the medium.

Radio is robust. I always prefer it because it allows the listener to create pictures in their mind. In fact, the medium demands active participation. This kind of mental work is particularly helpful to mysteries, thrillers, and horror tales. Even silly and overwrought material can sound convincingly scary if you turn out the lights and huddle close to the speakers.

Horror shows abounded on radio. Early efforts such as “The Witch’s Tale” and “The Hermit’s Cave” were joined by such fare as “The Mysterious Traveler,” “The Strange Dr. Weird,” “The Hall of Fantasy,” and “The Weird Circle.” The most familiar to the general public might be “Inner Sanctum Mysteries,” the opening of which featured the famous sound of a creaking door. Its host was sardonic, cracking wise and spilling puns everywhere in the lead-up to the story of the night. (The humorous horror host was later incorporated into horror comics and into television’s horror anthologies.)

Radio during that period was a family medium and did operate under constraints, and many of the horror shows weren’t really that scary. Many of these shows were deliberately tongue-in-cheek. Some had formulas that dictated that whatever supernatural nonsense was conjured up was explained away logically by the end of the episode.

Every once in a while, though, something genuinely terrifying would make its way onto the airwaves. Here follows my list of shows that scared and continue to scare me despite repeated airings.

Inner Sanctum Mysteries
“The Man Who Couldn’t Die,” Feb. 12, 1946
The best-known of all the old-time horror programs. Richard Widmark stars as a man who achieves immortality — at a terrible price.

Dark Fantasy
"Demon Tree,” Dec. 5, 1941
This excellent show originated from, of all places, Oklahoma City, a bizarre place to find top-notch writers and performers. It’s just as good as any East or West Coast show, and this episode proves it.

Mercury Theater on the Air
“Dracula,” July 11, 1938
The amazing dramatic experiment that Orson Welles and company pioneered set the bar high for narrative radio; no one ever really equaled it. All of these hour-long adaptations are worth a listen, and “Dracula” is a claustrophobic and intense gem.

Murder at Midnight
“The House Where Death Lived,” 1946
This show was ludicrously over the top, but it was so convincing in its execution that it got under your skin. It frequently starred the deliciously evil-sounding Berry Kroeger, who gets into all kind of trouble here.

The Mysterious Traveler
“Behind the Locked Door,” Nov. 6, 1951
Two archaeologists are trapped in a cave that also holds the descendants of a wagon train who’ve adapted to life in complete darkness.

Quiet Please
“The Thing on the Fourble Board,” Aug. 9, 1948
When an engineer drills into earth, he unleashes an unholy monster.

Escape
“Escape” was a wonderful show, “designed to free you from the four walls of today for a half-hour of high adventure.” The program covered many different genres and styles, and its horror was superlative.

“Evening Primrose,” Nov. 5, 1947
A poet decides to quit the rat race, and hide himself in and live in a department store. He discovers that he’s not the first with the idea.

“Three Skeleton Key,” March 17, 1950
Starring Vincent Price, it’s the tale of three lighthouse keepers who must fight for their lives when their island is invaded by swarms of rats.

“Bloodbath,” June 30, 1950
Vincent Price is here again as an expedition to recover valuable uranium leads men into a jungle nightmare.

“Poison,” July 28, 1950
One of the greatest exercises in the generation of tension in sound, the attempt of a native doctor to save the life of a prejudiced American is unexpectedly moving.

Suspense
“Suspense” was billed as “radio’s outstanding theater of thrills,” and it produced episode after solid episode for years.

“The Hitchhiker,” Sept. 9, 1942
Orson Welles stars in the classic tale of a hitchhiker who keeps appearing to a cross-country driver.

“Sorry, Wrong Number,” May 25, 1943
Agnes Moorehead stars in one of radio’s most iconic shows. She’s a bedridden woman who accidentally overhears a plot to murder her.

“Donovan’s Brain,” May 18 & May 25, 1944
Orson Welles again, in a special two-part adaptation of Curt Siodmak’s great novel about a scientist who preserves the brain of a dead tycoon — and finds it taking over his personality. Part One; Part Two

“August Heat,” May 31, 1945
My personal favorite. Ronald Colman is artist who draws a presentiment of his death, and finds a tombstone carved with his name, date of birth — and that day as the day of his death.

“The House in Cypress Canyon,” Dec. 12, 1946
The new house for rent has only one thing wrong with it — werewolves.

“Dead Ernest,” Aug. 8, 1946
The buried-alive story had been done numerous times before, but here a cataleptic man lies in the morgue, waiting to be autopsied, with no way to let anyone know he’s still alive.

Lights Out
This was the scariest of all the classic radio horror shows. They WANTED to frighten the living bejeezus out of you, and they frequently succeeded. And yes, they always did tell you, “if you frighten easily, turn off your radio now.” Yikes.

“The Dark,” Dec. 29, 1937
Again, only an excerpt exits. A horrible black fog turns victims inside out — without killing them.

“Come to the Bank,” Nov. 17, 1942
A man figures out how to penetrate solid matter, but finds himself irrevocably trapped.

“Death Robbery,” July 16, 1947
What happens after death? Boris Karloff plays a scientist who brings his wife back to life, but discovers an essential element is missing — her soul. 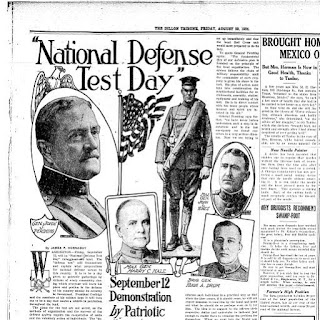 What do you know? Live from coast to coast, it’s the military/industrial complex!

On Sept. 12, 1924, 18 fledgling radio stations shared the same broadcast nationwide, a largely unprecedented feat. Everything you need to know about this unprecedented communications event can be found here in CaryO’Dell’s comprehensive essay at the National Recording Registry; my comments are parenthetical.

The National Defense Test was conducted in concert with something called National Defense Day, a government initiative to promote military preparedness and patriotism. It was deemed valuable to be able to communicate with the entire country simultaneously and instantly in case of national emergency (such as an invasion, though this wasn’t made explicit), and radio provided the ability to do just that.

Military concerns often prompt advances in technology, especially in American history and particularly since the beginning of the last century. The phone company, long a tolerated monopoly as American Telephone & Telegraph, had perfected the ability to transmit sound from station to station using long-distance telephone lines. Under the aegis of the U.S. military, a series of hookups united the stations into a temporary network.

This was not the first coast-to-coast broadcast. On Nov. 11, 1921, speeches from Arlington, Virginia were transmitted to New York City and San Francisco via phone lines. In 1922, two primitive rival networks developed — AT&T’s “WEAF chain” and RCA’s “WJZ chain” — but these were only regional. AT& T’s chief engineer James J. Carty made a speech Feb. 8, 1924 that made its circuitous way across the continent, again through an ad hoc linkage of stations.

The content of September’s 90-minute program, described by O’Dell, was dry and formal. The important thing about it was the possibilities it outlined. Continuous information and entertainment could now reach a mass audience in real time, a bigger cumulative audience than the world had seen before. This meant big business. (New York and Chicago were early broadcast centers; the West Coast wasn’t seen as such until Louella Parsons initiated the Hollywood Hotel radio show in 1934.)

It also meant that the powers that were now had a mighty megaphone at their disposal. Mass communication would prove to be a double-edged sword. The medium was neutral; it would accommodate whatever message was sent over it. It’s worth thinking about in an age where dueling propagandas have, temporarily I hope, superseded the search for truth.