In 1893, the World’s Columbian Exposition in Chicago was held to celebrate the 400th anniversary of Columbus’s landing in the Americas. This 600-acre fair entertained 27,000,000 visitors in its year of existence. It vaunted American scientific and industrial know-how, but included 46 pavilions showcasing nations from around the world.

As a part of this cultural exchange, musical performers came to America and shared their work with visitors. Benjamin Ives Gilman, psychologist and amateur cultural anthropologist, record 101 cylinders of music from the participants, including music from Fiji, Samoa, Java, and Turkey. 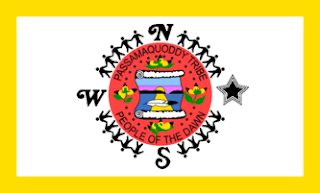 Passamaquoddy Indian field recordings
Jesse Walter Fewkes, recorder
30 cylinders
March, 1890
For the first time in this survey, the audio material in an entry of the National Recording Registry is unavailable; however, it’s for a very satisfying reason.

It’s unclear how hard it will be find many of these recordings in advance. I have faced this problem once already in my older, similar “National Film Registry Project” at Film Patrol. (Here is the entry onthe missing item, the 1909 film “Lady Helen’s Escapade.”) Normally, I’d again be irritated that I couldn’t access and evaluate the recordings. I’m not. But, the back-story first:

Anthropologist Jesse Walter Fewkes was slated to join a folklore- and –life-gathering expedition to the American Southwest in 1890. He sought to test out his crank-powered cylinder recording device closer to home beforehand, so the Bostonian visited the Passamaquoddy people of the Maine/New Brunswick region. There, Noel Josephs and Peter Selmore told tribal tales, sang songs, and recited vocabulary, all in Passamaquoddy, for Fewkes on a set of 30 cylinders.

They represent the first field recordings, as well as the first recordings of Native Americans. Initially, the recordings joined the heap of other materials gathered from American natives, snatched from oblivion just as the “taming of the West” was completed. As such, they were the province of folklorists, ethnologists, and linguists – everyone but the people to whom the sounds belonged.

Finally, in 1985, the American Folklife Center completed its safety transcription of 10,000 cylinders-worth of data, and began repatriating the recordings to the tribal descendants of the respective recording artists.

It turns out there’s a lot of sensitive data on these recordings. There are sacred songs on these cylinders, never meant to be recorded, or even heard by the uninitiated. The Center staff visited more than 100 tribes, letting them know about the recordings, making them available, and turning over control of them as well. Here are two excellent essays about the process, one by Judith Gray of the American Folklife Center and the other by Peggy Bulger and Michael Taft of the same institution.

Today, permission from the Passamaquoddy is needed to access these recordings, as it should be. Do we have a right to peer into the secret souls of those around us? Nope. Nor should we. The fact that we can’t pore over these represents an evolution in the treatment of native people in the United States. Treasure your heritage, Passamaquoddy – there are many other songs to be heard.

This episode is not so much about the message, but the medium.

Emile Berliner was an inventor who came up with the innovation of the disc record. Until then, cylinders were deemed the best way to record analog sound, with grooves that transmitted signals vertically. Berliner’s idea in 1887 was to create a groove that spiraled inward around the surface of, first a hard rubber, then a shellac disc, transmitting signals laterally.

The chief virtue of this innovation was that it was cheaper to manufacture. As well, these new discs could be stamped out in mass profusion, without loss of sound quality. This was a big relief for performers who had to repeat performances over and over on cylinder, creating only 10 to 150 recordings at a time. Despite resistance from Edison, discs gradually overtook cylinders in popularity. Berliner’s Victor Records made money. By 1929, cylinders for recordings were no longer manufactured. The sound industry created its first obsolescent technology.

The two tracks featured here document the new technology. Again, content creators were trying to make records that would appeal to the broadest possible public – the well-to-do owners of record players as well as those who paid a nickel to listen to audio selections in “phonograph parlors” – a brick-and-mortar proto-Spotify.

Religious material was something that could be played for the edification of the entire family without raising objections – a perfect way for the technology to insinuate itself into the home. Nursery rhymes were a safe bet as well.

Berliner doesn’t have the most distinctive voice, but we can hardly begrudge him to leave his sonic mark. Thanks to him, collectors have piles of vinyl records, instead of stacks of cylinders.

The NRR Project: ‘The Pattison Waltz’ and ‘The Fifth Regiment March’

The Fifth Regiment March
Issler’s Orchestra
March 1889
Commercially recorded music starts off painfully white. These two pieces are samples of the first commercially available recordings. As such, they were chosen for the widest possible popular appeal, as well as the ability to translate effectively for playback. Brass and drums went over fine, as well as strong, high pitches. Subtlety was out.

So what do you, you mythical world’s first music producer, program?

“The Pattison Waltz” dates from 1877, and is named for its composer, J.N. The post-Civil War, pre-recording age in music in America consisted mainly of people making their own music at home, via “parlor songs,” hymns, and commercial hits from minstrel shows, including a remarkable number of racist “coon” comedy numbers -- and was dominated by sheet music. My research has not determined whether this piece originally ornamented a New York show, the usual path for success for pre-Tin Pan Alley hits such as “After the Ball” and “The Bowery.”

This rendition is performed in sheer vocalese, but there are lyrics by E.A. Valentine. They are in Italian, with English lyrics below (“I would like/If we could/Here alone/with no other . . . “). The American art song was a long, long time in coming (Charles Ives was 15 in 1889), and it was considered proper for upper-class Americans to ape European culture, even if it meant singing something “in translation” to class it up and increase its sales appeal that was probably first written in English.

Effie Stewart is referred to only once, via the non-profit compendium project the Internet Archive, as a soloist at St. Patrick’s Cathedral. She is introduced by a male voice that stops and coughs out three ironic barks during his identifying spiel. Is he mocking her? Is SHE mocking her?

What erupts is a trill-laden, swooping kind of gay and lighthearted waltz that was a good solid bet to be enjoyable, more or less, to the entire family. It’s the kind of kitschy, operetta-influenced piece that would be ruthlessly parodied in films and cartoons to come. The opera-gushing, pigeon-breasted, lorgnette-wielding pretentious grande dame was the indispensable foil for comic from Chaplin on down. And this was the kind of insufferable crap she would sing.

“Fifth Regiment March” is much crisper and more distinct. Issler’s Orchestra, a small combo led by local music teacher and pianist Edward Issler, cranked out a number of early “hits” for Edison before being superseded by more “name” bands such as John Philip Sousa’s.

Marching band music was seemingly made to overcome the limitations of early recoding, muscling its way through the stylus onto the cylinder. The march is really a medley, running from “Goodnight, Ladies” to “Mary Had A Little Lamb,” Stephen Foster’s “Some Folks Do,” and others. The bandsmen give a collective hurrah at the end.

So there you have the distaff sides of early recoding – the frilly, silly doings of ladies and the martial music of men.