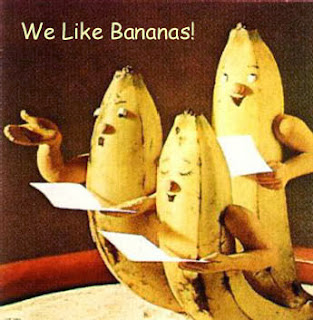 *with special bonus irrelevant anecdote at end of story!

"Bananas are great, as I believe them to be the only known cure for existential dread."
-- Anne Lamott

Well, I thought this would be a lot easier. How many songs about bananas could there be?

This all started due to my chipper early-morning nature, which my delusions still tell me is a darn good way to awaken and motivate little slug-a-beds. I tend to thump around the house at dawn, belting out forgotten hits such as “Stout-hearted Men,” “They All Laughed,” and the like. It is a trait despised by all.

This particular cockcrow I was massaging my tonsils with a rendition of “Yes, We Have No Bananas.” My youngest, with a sweet precociousness derived from viewings of the Disney Channel, called out, “Dad, SHUT UP!”

Later, though, she wanted to hear it again. (Yes! Another generation warped!) I played the original version for her, and then started poking around online. Did you realize there was an answer-song to “Yes, We Have No Bananas”? Did you realize how many songs there were about bananas, and how many of them were dirty? Why are bananas so damn funny, anyway? Do you care? Hello?

First of all, what is the big deal about the banana? Is it, along with the pickle, God’s designated punch-line foodstuff? I can make a few surmises – it’s relatively new to Western consciousness (introduced in the U.S. only in 1870); it’s colorful; it’s funny-LOOKING; it’s delicious (see bonus irrelevant anecdote at the end of the story!) and damn near impossible to eat incorrectly. (The old joke is, the farmer was given a bunch of bananas for the first time. The giver returns days later and asks if the farmer liked them. “They sure did taste good,” the farmer replies. “Purty big cobs, though.”)

And it resembles the male generative organ (“Only larger,” yes, I hear you in the back of the room). We have banana-phrases locked into our collective consciousness. Where would comedy be without slipping on a banana peel, getting hit in the face with a banana-cream pie? There are the bountiful joys of the banana split, and the more sinister connotations of the banana republic.

Anyway, given that I have a desk full of really important projects to work on, I digressed enthusiastically into this matter as only I can. I’ve dug up more than 100 banana-flavored songs, arranged them in six somewhat-neat categories, and filtered out the ones that did nothing for me – although I love the titles of songs such as “Banana in Your Fruit Basket,” “Bipolar Banana Cake,” “Smokin’ Banana Peels,” and I liked more serious musical essays on the topic by the likes of Radiohead and the Boomtown Rats.

First and foremost, in a category by itself, is “Day-O (The Banana Boat Song),” a Jamaican “mento” work song sold as a calypso-style song and made famous by Harry Belafonte via his 1955 performance on TV’s “Colgate Comedy Hour.”

Its explosive international popularity led to an American mini-craze for calypso music, and a raft of covers by all manner of performers, parodies, and tributes -- most of them astonishingly Caucasian in their un-funky rendition. It’s become a mini-meme.

Here reside both superlative and corny stabs at pure tropical delight – our fondness in them in large part a legacy of the resurgence in U.S. interest in South American culture once World War II was finished. Of course, this being the United States, this interest didn’t manifest itself as an upsurge in discussion of the works of Borges and Paz. No – it was an upsurge in people taking mambo, cha-cha, and rumba lessons!

These are just so odd, they deserve deep browsing by aficionados --

The Fantastic Story of the Steam-Driven Banana – Legay

The Road of Love is Paved with Banana Skins – BMX Bandits

This category consists of tunes written specifically for children; however, parents who want to make playlists are encouraged to browse through the “Silly” roster as well --

Mama Will You Buy Me a Banana -- Ross Sutter

From music-hall songs to contemporary works, this gallery of goofiness is irresistible!

Yes, We Have No Bananas – Bailey’s Lucky Seven

I Like Bananas Because They Have No Bones – Hoosier Hot Shots


Loving You Has Made Me Bananas – Guy Marx

Japanese Banana – Alvin and the Chipmunks

Put a Banana in Your Ear – Jason Steele

I Am a Banana – Parry Gripp

Hey, this all started with the curiosity of my 10-year-old. No, dear, you can’t listen to these. I have tried to err on the side of caution – none of these are SFW or family-friendly . . . unless you have a very interesting family.

My sister traveled in Europe, and once brought back a boyfriend from the former East Germany. Klaus, or Klausie-poo, as we sometimes called him, was a nice guy, despite his unfamiliarity with English, which could get him into trouble. (For a short time, in accordance with a prankster’s directions, he greeted people warmly, “Hello, buttmunch!”) Klaus was trying to describe the privations and shortages he grew up with in the communist state’s planned economy. One thing no one in East Berlin had ever had were bananas. Once the Wall came down, they became a hot commodity. Klaus described it thus: “Everyone was running around with bananas in their eyes!” A wonderful visual to summon up the lure and thrill of materialism.

(There. I’ve waited 20 years to relate that anecdote, however tangentially, to something I was writing. Gaaaaah!)