CULTURAMA: The Mystery of Malvert 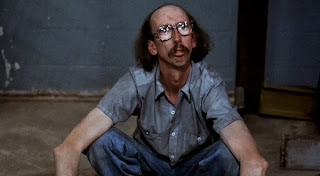 As little-known an artist as Ollie Jo Prater, S.P. Dinsmoor, or Vivian Maier, Patrick Boone Varnell plied his trade in near-obscurity. As fleetingly as a firefly, he sped across our field of vision and vanished. Who was he, and for what purposes was he used?

He was born in Lawton, Oklahoma, on Jan. 11, 1941. (Thank to the anonymous reader who provided this link to his obituary.) He was possessed of unique physique, an extreme ectomorph with hypermobility (he was real tall and thin and double-jointed). Slapping the monicker of The Stick onto himself, he takes a credit as Malvert the Janitor in Mickey Rose’s single directorial effort, the 1981 slasher parody film “Student Bodies.”

Rose, a talented comedy writer who started off in high school with friend Woody Allen, cranked out this spoof with efficient fervor. It’s one of a long line of horror-comedy films, from “Ghost Breakers” through “Spider Baby,” the “scary Movie” series, and the new “What We Do in the Shadows.” “Student Bodies” trips along in the scattershot modality of the “riffing” film, made popular in the wake of “Airplane!”.

Varnell (as The Stick) portrays school janitor Malvert, who ambles artlessly through many scenes casually eating half-eaten trash off the lawn . . . without bending over, peeing in the wastebaskets, bringing a blow-up date to the big game, lapping punch out of the bowl at the high-school dance. 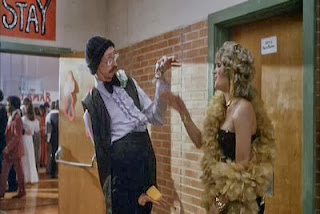 Malvert is a revolting grotesque. His ratty hair, thick glasses and spasmodic movements mark him as the archetypal outsider, the freak of nature. As such, he is naturally the first suspect in the serial murders of the local teens who choose to have sex. Of course, he winds up being not only a kind of childishly innocent monster, but a magical helper as well to the movie’s endangered heroine, stealing the keys (and incidentally, the cheese) of the school principal.

After “Student Bodies,” Varnell accumulates only one more credit. He can be glimpsed in the pilot episode of “Out of Control” in 1984. This was the first series produced by Nickelodeon, and featured Dave Coulier as host, right before he moved on to the immortal role of Joey on “Full House.” This anthology show featured comic bits interspersed with semi-educational material, a la ABC’s “Make a Wish” a decade earlier, pitched again to the 5-12-age set.

Once again, Varnell is used purely for his comic physical anomalies, cutting briefly into focus. Like a fright mask, his unexplained injection into the sketch serves to trigger incredulity, discomfort, and (hopefully) some laughs.

Was he witty? Was he in on the joke his appearance had forced upon him? At the end of "Student Bodeis," an it-was-all-a-dream scene takes place, and Malvert is evidently a tweed-clad intellectual. "I dreamed you were the janitor!" the heroine exclaims. "Ab-SUHD!" Malvert responds.

Quasimodo’s crowning as the Pope of Fools in Hugo’s “Hunchback of Notre Dame,” paraded around Paris – what did he make of the inversion of his status? “. . . disdainful joy lighted up the morose face of the cyclops, when he beheld beneath his deformed feet all those heads of handsome, straight, well-made men." Does mockery elevate the different, or does holding them higher only make them a better targetto spit at, to inspire awkward, uneasy laughter?

Did Varnell take it well? Did it dishearten him? Is that just show biz? 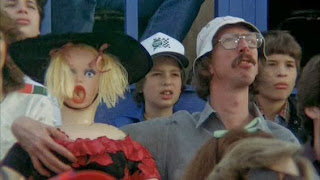 He wasn't born in Corsicana Texas, He was born in Lawton Oklahoma
and Died In Dallas Texas. And his body was donated to science.
here is his Obituary...

thank you so much! i appreciate your help in filling out the details on his life.