Story of a song: 'My Melancholy Baby' 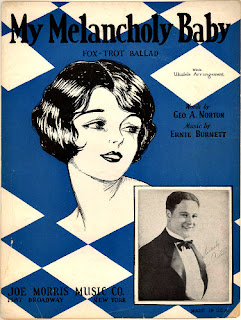 It was the first torch song. It’s only heard in old movies or TV shows these days. The scene is usually a smoky barroom, at the ass-end of the evening. It’s that peculiar time of night when the soused, haunted by their past, call for this maudlin ballad and begin to sob. It’s a running joke in the 1954 film version of A Star is Born, as poor Judy Garland is harassed with, “Sing ‘Melancholy Baby’!”

This drunkard’s tearjerker took only a little longer than 40 years to become a cliché. It’s one of the one-hit wonders in the Great American Songbook, and the only one to be written in Denver, Colorado. Its 1912 birth in my hometown spurred this investigation. A couple of pretty tales have been spun around this song, but the real story of “My Melancholy Baby” is filled with false starts, warring claims to authorship, a scrambling for royalties, and litigation. Failure is an orphan, success has a hundred fathers.

One: William Frawley is best remembered for playing Fred Mertz on the “I Love Lucy” TV show, but he started as a song-and-dance man. On the May 3, 1965, episode of the TV game show “I’ve Got a Secret,” he revealed that he was the first to sing “My Melancholy Baby,” at the Mozart Café at 1647 Curtis Street. The noted journalists Gene Fowler and Damon Runyon were there.

Two: The composer Ernie Burnett served in France in World War I, was wounded and lost his memory. In the hospital, he heard someone singing “My Melancholy Baby,” recognized it, remembered who he was, and made a full recovery.

I’m unable to confirm or deny the truth of the second story, but the first story is disputed by almost everyone.

Composer Ernie Burnett (originally Ernesto Bernaditto from Cincinnati) and his then-wife Maybelle Watson, who was the song’s first lyricist, filed for copyright on the song, then called “Melancholy,” on October 31, 1911. Despite their efforts, they couldn’t interest anyone in it. (In those days, songwriters carried their songs from one publisher to another, auditioning them.) Finally, Denver club owner and music publisher Theron C. Bennett bought the tune, but tossed the words. He set an employee, George Norton, to write a new set of lyrics. This jerry-rigged song became an enormous hit.

“Come, sweetheart mine, don’t sit and pine
Tell of the cares that make you feel so blue
What have I done, answer me, hon
Have I ever said an unkind word to you

My love is true, and just for you
I’d do almost anything at any time
Dear, when you sigh, or when you cry
Something seems to grip this very heart of mine

Come to me my melancholy baby
Cuddle up and don’t be blue
All your fears are foolish fancies, maybe
You know, dear, that I’m in love with you

Every cloud must have a silver lining
Wait until the sun shines through
Smile, my honey dear, while I kiss away each tear
Or else I shall be melancholy too”

Why was it written? To whom? Burnett told a story abut waiting for a woman (presumably his wife) for eight hours at the train station; Norton spins a tale about being sweet on a Denver waitress. Despite the desire to getting nailed being the wellspring of most romantic tunes, neither of these anecdotes is likely. "My Melancholy Baby" is an inspired piece of hackwork.

When the sheet music was published, it bore a dedication to “Miss Maybelle Watson of Berkeley, California.” Burnett and Watson were divorced by that time; perhaps the publisher sought to assuage Watson’s ego and prevent her from suing for a piece of the royalties, even though her lyrics were replaced by Norton’s. So who sang it first? Bennett, the original publisher, claims he gave the debut performance of it at his club, the Dutch Mill at 811 16th Street, in 1912 -- not Frawley. Two original copies of the sheet music feature two different artists pasted into the cameo center of the cover – “That Singer,” Jack O’Leary, and “winsome June Le Vey.” At this point, the song was still titled “Melancholy.” It was changed to “My Melancholy Baby” in 1914, and a year later Bennett folded, selling the song to Joe Morris Music Company in New York. Burnett claims he convinced Sophie Tucker to sing it, which began its rise to popularity.

The person who arguable made this song a hit was Walter van Brunt, whose 1915 recording may contain some of Watson’s original lyrics, pushed down into the song to make a second introductory set of lines. This set of words is omitted in nearly every recording of it:

“Birds in the trees, whispering breeze
Should not fail to lull you into peaceful dreams
So tell me why, sadly you sigh
Sitting at the window where the pale moon beams

You shouldn’t grieve, try and believe,
Life is always sunshine when the heart beats true
Be of good cheer, smile through your tears,
When you’re sad it makes me feel the same as you”

Tommy Lyman, a cabaret performer, made “My Melancholy Baby” his theme song during the 1920s, playing and singing it late at night and referring to it as his “torch song,” a reference to the old phrase “carrying a torch for someone,” an unrequited love. Perhaps it’s this specific pathos Lyman imbued it with that gave it its cliché effect on the inebriated.

It started showing up in films – The Roaring Twenties (1939), Birth of the Blues (1941), Johnny Eager (1942), Follow the Band (1943), Minstrel Man (1944). In the 1945 film noir Scarlet Street, director Fritz Lang and composer Hans Salter work the tune into the score and as source music in the film itself, as a theme to which the main characters disintegrate.

In Billy Wilder’s Some Like It Hot (1959), it’s the song that always seduces Marilyn Monroe’s character, especially when essayed on tenor sax. Forty-eight years after its birth, “My Melancholy Baby” ends its effective cultural life as a dick joke.

In the end, Bennett and Burnett reaped the royalties, after legal action against Joe Morris; Norton’s son had to litigate for years to get compensation for his father, who had signed away his rights to Bennett for $20 a week, back in the day. Watson got nothing. Frawley got the credit, and the song may have brought back its composer from the dead. Who knows? If you stick your nose down into the warf and woof of history, it's hard to see more than a tangle of contradictions, unresolvable, unprovable, lost in the past.

In the end, we still have a great song.

Tin Pan Alley: An Encyclopedia of the Golden Age of American Song
David A. Jasen
Routledge
2003

A Century of American Popular Music
David A. Jasen
Routledge
2013