They always made me play the Nazi.

There was one thing all the boys in our neighborhood was keen on in the 1960s – World War II. Our martial ardor was stoked by the flood of film and television of the time replaying the war for us. We all tuned in to “Combat!,” “Twelve O’clock High,” and “The Rat Patrol.” These took their cue from the popularity of the popular war films of the time – “Battle of the Bulge,” “The Guns of Navarone,” “The Longest Day,” “The Dirty Dozen.”

It wasn’t the propagandistic stuff made during the war, although we could catch plenty of that on late-night TV. It was the propaganda of the generation after. Already the Western, which dominated 1950s media, was collapsing in popularity. It was time to culturally process the war through mass media.

Each crop of surviving soldiers takes decades to work through and integrate these experiences, and some never do. Men who had fought the war were middle-aged fathers by now; the horrors they perpetrated and endured were repackaged into entertainments, made largely bloodless, noble, and above all necessary. Above all, these films featured scads and loads of bucket-helmeted, gray-uniformed Jerries getting slaughtered in every way imaginable.

This was our male paradigm. The warrior, reluctant to kill but grimly determined to defeat the enemy, ready to sacrifice his own life if need be. The G. I. Joe doll, Sgt. Rock, "Star Spangled War." The same archetype adored by the fanatics, the suicide bombers, the mass murderers. No cause is unrighteous in its own eyes. A fart has no nose. 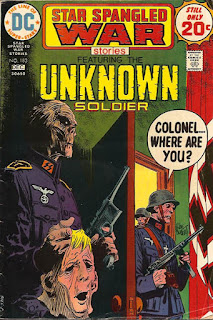 As the youngest and scrawniest of my gang, and gifted quite inadvertently with a Teutonic surname, I was volunteered to play the bad guy, over and over again. I learned a few things – it is much more fun to play the villain, for instance. But by and large it got old quick. I was tired of dying a thousand different ways and coming home covered with the dust I’d bit all afternoon.

Oddly enough, the great-grandparent with the German name had adopted it on arrival in the U.S. – we should rightly be named, like most good Danes, Andersen. I’m not sure if this ever caused trouble for my Dad’s side of the family, but I do know that my mother’s father, a good solid 100-percent Kraut, knocked the umlaut off his moniker when the war broke out, rendering its pronunciation a bit more un-German. He also volunteered for the U.S. Army cavalry, and made it all the way to New York before peace broke out in November 1918. 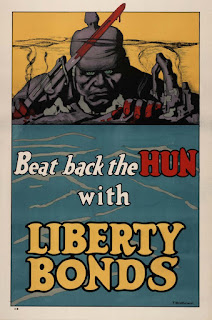 Evidently, anti-German sentiment during World War I was pronounced. I first ran into mention of it in Steinbeck’s remembrances – the neighbors looked askance at his family until the war was over. Groucho Marx as a young vaudeville comic had been playing a German-stereotype character, already euphemized to “Dutch comic.” The night the Lusitania was sunk in 1915, he changed his act.

“If I had come out as a German comic, they would have killed me,” he recalls on his 1972 concert album “An Evening with Groucho.” He changed his makeup “and now I was a Jew comic,” he continues. “I had never been a Jew comic before!”

The threat was real. 4,000 German sympathizers were imprisoned in the U.S. from 1917 through 1918. The Red Cross wouldn’t accept volunteers with German surnames. Business names and street signs were changed; they stopped teaching German in many schools. Sauerkraut became liberty cabbage, dachshunds became liberty pups. German books were banned or burned. A few men were killed by angry mobs.

Each rolling wave of immigrants to America has had to run the gauntlet of prejudice. The Irish, the Germans, the Polish, the Italians, the Mexicans, the Japanese, the Chinese, the Vietnamese, the Russians. Suspected, disliked, stereotyped, and acted against. Now anyone vaguely Middle Eastern is tagged as a Muslim and a violent one at that. A bit harder to hide a complexion than a last name.

Of course, the Nazis were the perfect enemy. Evil personified. No problem killing them and anyone associated with them. Our polar opposite, we thought.

The lines of prejudice were redrawn after World War II. The Germans, formerly one solid ethnic unit to despise, was now split in half. Democratic Germans were good, Communist Germans were evil. The Red Menace was harder to typify, differentiate, personify. The Cold War was fought by identical men on each side, all wearing gray flannel suits, indistinguishable.

But . . . we still had memories of the perfect enemy, the Nazis. Being seemingly perfectly inhuman, it was easy and guilt-free to kick their asses in copious amounts in our fantasy lives. 1968’s “Where Eagles Dare” held the record for decades for most German soldiers killed – here’s a funny video tallying the count:

Steven Spielberg, that not-so-obscure filmmaker of my generation, has related a fondness for this preposterous film. I wonder sometimes if we all got desensitized to body counts in this manner. It certainly seems like Spielberg follows in the wake of 1960’s World War II films when he created the violent extravaganzas of “Raiders of the Lost Ark” and “Temple of Doom.” Spielberg’s action films often mimic video games, with stage after stage of peril to be run through and their inexhaustible supply of baddies to be wasted. After Spielberg, the Matrix movies, Tarentino lately, and many other franchises and standalone film sagas filled with mass, righteous killings.

So what’s the appeal? John Cleese has the most succinct explanation of what shadow projection is: 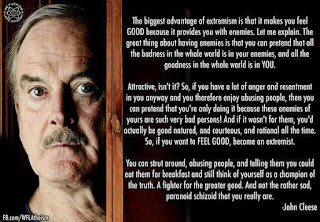 Sound familiar? In a year when our shadow selves seemed to leap into the light, brandishing weapons and killing innocent strangers in the name of slaying dragons, I hope we can learn that these arbitrary distinctions shouldn’t endanger us, that the misperceptions of others won’t get us killed, that our superficial characteristics don’t mark us for a beatdown or worse.

When you come right down to it, most of our identity is based on a set of imaginary constructs. Why should we let one set of illusions prompt us to destroy lives that operate on a different set?

We shouldn’t have to blend in or hide. That’s why we came here in the first place. Remember?