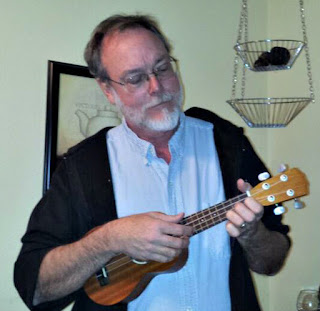 After six months’ practice, I can play Bach’s Prelude for the Cello Suite No. 1!

Well, the first six measures. At about one-quarter tempo. At this rate, the complete piece will be ready for public performance in May, 2018.

That’s OK, though. I’m making music, which I haven’t done in years. My weapon of choice – the humble ukulele, beloved instrument of amateurs worldwide. Mine is named Fred. How did this happen?

I am learning thanks to the Hal Leonard Ukulele Method. They know their boy – not only is there an instruction manual, but an instructional CD and DVD as well. Failure is pretty well foredoomed. If they can help me to make purposeful noises on this fancy hollow plank I’m holding, they know their stuff.

It sat around the house for a year first. Here’s how it wandered in. Our school district insists on one year of instrumental music for the kids, which I think is great until I have to pay for it. Our youngest went for the clarinet.

Fortunately (for them), our local music dealers are a piratical crew who make the bulk of their gains off this dictum. The deposit on a year’s instrument rental is not inexorbitant, and it is nonrefundable to boot. It IS, however, applicable to an instrument. There was just enough for the uke and the training doodads.

I was hoping one of the kids would pick it up. Nope. Finally, I grabbed it myself one day when there was something else really important to do. Wow! Did I learn fast! No. No, not really. I can now play “Go Tell Aunt Rhody” r-e-e-e-e-l-y slowly, and clear a room really quickly. (And why in the hell did she die in the mill pond a-standin’ on her head? This bothers me on hot, windy, moonless nights.)

My 12-year-old observes my nightly practice. “It’s obsessive,” she remarks with clinical detachment. I don’t think it’s a midlife crisis. I have no illusions about becoming some kind of Renegade Ukulele God, a virtuoso strummer born late in life, destined to tour the world, itsy bitsy instrument in hand, stunning the crowd, forcing my stupid celebrity political beliefs down interviewers’ throats, women draped all over me . . . OK, maybe I have thought about it a little.

We were lucky in our house growing up to be exposed to many different kinds of music. To begin with, there was church music. Every entrance into the sanctuary on Sundays was accompanied by organ voluntaries, booming and rolling through the high-ceilinged space. Hymns are a large part of Lutheran music, which meant that I got to listen to massive amounts of Bach.

There are sporadic outbreaks of music-making in the family past. My great-grandmother had an upright piano in her parlor, draped with sheet music. Sometimes her daughter, my great-aunt Emma, would plunk out some of the old tunes and we would all sing. The keys were genuine, yellowing ivory that we were not to touch. My dad played trombone in marching band. And, when we cleaned out my grandparents’ farm in Iowa, 20 years ago, we unearthed an old, battered, unstrung uke that supposedly my grandfather wooed my grandmother with.

My father’s side of the family was by far more hip – and somewhat pretentious. My dad’s parents had all the latest sound equipment, including one of the first reel-to-reel tape recorders. They had stacks and stacks of brittle, heavy 78 rpm records: Al Jolson, Bing Crosby, Fats Waller, Gene Autry, Spike Jones, the Andrews Sisters. They were also fond of operettas, Gilbert and Sullivan, and what was then referred to as “light classical.”

Mom’s side definitely had less elevated tastes, and as a result, were much more interesting. They were into country, the National Barn Dance, Hank Williams, Roy Acuff. The hymns they sang were more heartfelt – “Blessed Assurance,” “In the Garden,” and “Blessed Be the Tie That Binds,” songs that skewed closer to evangelical practice. My mother’s enthusiasm for folk and protest music swept us along, and we knew all of Woody Guthrie’s songs, and Pete Seeger’s, and Paul Robeson’s. And of course, we worshiped daily at the Church of Johnny Cash. (She had a sideline interest in musical theater that inspired my future involvement in it.)

We couldn’t afford instruments. So we sang. I spent 90 percent of my time in high school in the theater or the choir room. I never learned how to read music, either. It wasn’t important at the time. We had excellent teachers. The energy would flow upward from my feet, pushing up through my breath, out the top of my head, clear cascading sound. When we were focused, working as one, it was like launching the sun into the space in front of us. Music manifested its own sacred space.

Now I am finding that feeling again, at my kitchen table after dinner each night. After some practice, the instrument seems to warm up, become more pliable. The strings follow my fingers’ suggestions, and I am making magic, pulled out of myself again, but the feeling is smaller, quieter now, as though I were cradling a song like you would a child.

My voice is certainly not a bell-like baritone any longer. I can still sing, though, and that’s all that matters. I’m not going back to the stage, or near any open mic. I can finally enjoy playing the bluegrass and blues I love so much. I am trying to suss out a little jazz, too, like the chord changes to "Compared to What." I can even pick up a little Motorhead or Clancy Brothers. Plunking my ridiculous lyre, I can sing Hank Williams, and Bing Crosby. I can stutteringly finger-pick a little Bach. And when I do, it all comes back – us kids singing along to records, pretending to be The Student Prince or Ko-ko, the Lord High Executioner of Titipu. My mother’s voice in church and in the kitchen. The connection.

And, of course, I am simply having fun, and very grateful that I remembered how.
at January 21, 2016