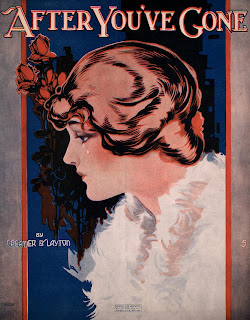 “After You’ve Gone” represents a turning point. Up until it became a hit, “black” and “white” musics stayed in their respective corners. Bluesy music wasn’t even thought to be fit for recording. When it finally was, it was classified as fit only for “race records,” not for right-thinking Caucasians, who were still awash in sentimental ballads and waltz tunes. After it hit, the mainstream move away from the stilted, pallid songs of the day began in earnest, sparking the collective creation of the Great American Songbook.

The tune was composed by African-American vaudeville partners Layton and Creamer, who supplied many shows and revues around Manhattan with material – the Ziegfield Follies, for one. Though civil rights were still abysmal, finally black artists were finding their work valued. It gave them a toehold in the entertainment world that would lead to other opportunities.

The song is definitely built on a blues lament – it’s a classic you’ll-be-sorry-for-leaving-me song. The cadences are long and loping, with a series of descending chords that make the singer feel as though they’ve stepping down into the phrases. Meanwhile, the poignant runs up and down to the “gone” notes actually convey woefulness. Songwriting is starting not to tell but to show, to embody strong and intense emotion in the music itself, in compact unis, all tied together to reinforce an overarching theme. The architecture of pop is under invention.

The lyrics are direct and conversational, and reflect the growing idea in American songwriting that a song is personal, sung to an imaginary individual, instead of just belted out to the crowd. The song tells a story, and conveys a perspective – a two-minute miracle. This, along with a melody that welcomes harmony and variation, resulted in it being one of the most recorded standards ever.

The delivery of Marion Harris in this recording is stiff and polite. It would take the 1927 recordings made by Last of the Red Hot Mamas, Sophie Tucker (covered earlier her in the series) and Empress of the Blues Bessie Smith to really give the material the swing and heft it deserves. Since then, it’s been recorded countless times, in all kinds of tempi and arrangements. It’s indestructible. 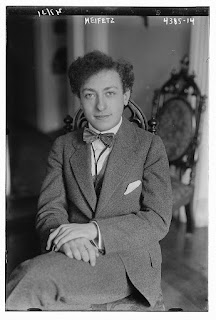 What would it be like to be the best ever at something? The epitome, the paragon, the pattern of perfection? It is painful, wonderful? Both? Is the expression of genius-level talent inevitable?

Case in point -- Jascha Heifetz. Born in Lithuania in 1901, he was the son of a violin teacher who noted his responsiveness to his playing in the child’s infancy. Lessons began at age 2, and his status as a prodigy spread quickly. By 1911, he was giving outdoor concerts in Odessa that drew thousands.

The looming Russian Revolution prompted the Heifetzes to flee the hard way – to the East, across Siberia and the Pacific to America. Heifetz’s appearance at Carnegie Hall on October 25, 1917 electrified the musical world and led his lifetime recording relationship with Victor Records (later RCA).

The records in this selection were made over 16 sessions, all using the acoustic recording process. This literal analog method of reproduction was best for brass, all right for vocals, piano, and high-register strings – and deadly for many others without a crisp sound that cycled between 250 and 2500 Herz. Heifetz’s strength, speed, accuracy all come through loud and clear.


Heifetz’s preternatural technical skill meant that he could leap over the first and highest hurdle to instrumental mastery. (Yes, he practiced diligently nonetheless.) After a century of so of robust, flamboyant, and sentimental showmanship in violin soloists, Heifetz focused on eliminating all affectation – paring everything back to the notes on the page and how to express them as cleanly as possible. This led to accusations of robotic performances later in his career. However, it’s evident that he was merely locked into a laser-like intensity of focus that precluded excessive gestures.

The pieces recorded here are very much a part of the violin repertory of the time – concert pieces, many considered “light,” lyrical works by Sarasate, Paganini, transcriptions by Fritz Kreisler, the last of whom was the top-dog fiddler of the day. Heifetz subordinates himself to the needs of the piece he is playing rather than imposing a style. His dedication to clarity, clarity, clarity markedly narrowed the gap between the composers’ intents and the listeners’ ears.