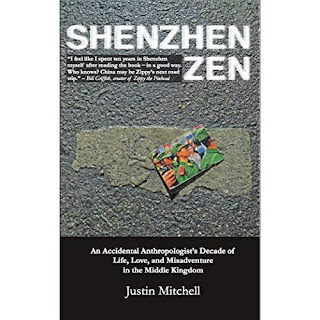 The only reason you need to purchase and read Justin Mitchell’s new memoir of his journalistic adventures in China, Shenzen Zen, is that it contains this sentence:

“I never thought that at the same time next year I’d be spending the afternoon of my 51st with an apparently autistic 4-year-old Chinese child on a beach with signs forbidding ‘Whoring and feudalism.’”

OK, there are more reasons.

Mitchell, long-time reporter and editor for American publications wholesome and unsavory, found himself living and working in China from 2003 through 2012, moving from one journalism gig to another as one does — or rather, once did back when there was a plethora of publications to drift among. The resulting adventures could have filled a book, and did.

(Please note, I have been reading Justin for 40 years or so. I grew up reading his music writing for Denver’s late lamented Rocky Mountain News. Years later, I met him in a drug-fueled haze somehow associated with our mutual involvement with the pioneer regional TV program HomeMovies, and have tracked him ever since, through gigs at such stellar rags as the Weekly World News, where he crafted lifestyle pieces such as “Melt Flab Away with the Roadkill Diet!.”)

His chronicles are great — like the best journalistic prose, his writing is snappy, to the point, and insolent. There is not one scrap of high-minded analysis here, nor the stench of any self-righteous soul-searching. Instead, Mitchell does what one is supposed to do. He tells us his story in as straightforward, honest, and entertaining manner possible, and succeeds.

Mitchell doesn’t tread on the ground of history here (although he did dub Hong Kong’s somewhat infamous “milkshake murderer”). He stays in the zone of real life, at ground level, dealing in the daily details that define a life no matter where it’s lived. He looks for a decent place to live, tolerable food, cheap bars, and lively female companionship and even affection.

The politically correct will not tolerate this book; a few chapters in they will shriek and puff themselves inside out like a kernel of outraged popcorn. The rest of us will thoroughly enjoy it.

To be sure, Mitchell doesn’t hold back on sarcastic commentary, skewering the hypocrisies of the Chinese system, the ugliness of the Western visitor, and their mutual cultural incomprehension. Above all, he doesn’t kid himself, and we get a warts-and-all self-portrait as well. The result is an eloquent, raw, sharp-toothed take on a life, in a style that bears far more resemblance to reality than that of many memoirists.

Journalists and comics are a lot alike. Both populations consist of inveterate gossips, excuse-makers, lowlifes, guttersnipes; bitter, twisted, sociopathic, and bitterly funny humans. Neither profession sports a union, for the simple reason that there is no solidarity in them besides at the bar rail. And both know how to tell stories. Mitchell’s books is crammed with them, and most are laugh-out-loud funny (OK, he’s not a clown — he breaks down and gets serious when appropriate).

So do yourself a favor and read someone with no redeeming social value, but plenty of human value. Shenzen Zen is a good time. 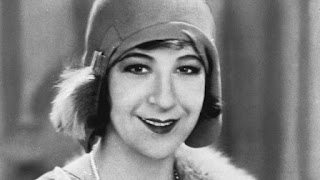 In 1921, the top comic in America was Fanny Brice. She was the uncrowned star of the biggest, most popular revue show on Broadway, the Ziegfeld Follies of 1921, featured in four scenes in the first act, three in the second. Two of her performances from this show became her heads-and-tails signature songs, one highlighting her comedic talents and the other shining a light on a personal sorrow that informed her work.

That a Jewish Hungarian immigrant girl could break into big-time show biz and become a star is the stuff of movies, and so if we know Fanny Brice at all it’s as Barbra Streisand’s interpretation of her in the 1968 film adaptation of the 1963 hit Broadway musical Funny Girl, which made Streisand a star. It’s a lot of mythic baggage to carry.

The “real” Fanny Brice, Fania Borach, had a story that was a lot more mundane. She was funny and determined and assertive. She had a big, pleasant voice paired to sharp, clear gestures. There was a long roster of female comedians at the time, few of them remembered now – Mae West, Beatrice Lillie, Ina Claire, Marie Dressler, Helen Broderick, Joan Davis, Gracie Fields, Moms Mabley, Polly Moran, Amanda Randolph. Fanny’s wholehearted exuberance and energy was welcoming, making her a perfect clown.

A large part of her early shtick was mining the familiar and popular vein of fish-out-of-water ethnic humor. Her Yiddishe takes and talk undermined the satirical targets of her comedy sketches. In “Second Hand Rose,” a novelty song with music by James F. Hanley (“Indiana,” “Zing! Went the Strings of My Heart”) and lyrics by comedy writer Grant Clarke (“Ragtime Cowboy Joe,” “Am I Blue?”), turns a pathetic situation into a shout of complaint. The song’s heroine, who never has anything new, is not the typical silent sufferer of other songs such as “I Ain’t Got Nobody” and “I’m Nobody’s Baby.”

“Even Jake the plumber, he’s the man I adore/He had the nerve to tell me he’s been married before,” she sings, giving the song a witty sexual punchline before coming back to the refrain. In contrast, “My Man” was a calculated choice, one of the first instances in American culture in which a singer’s personal travails became part of the emotional freight of their song’s delivery.

It was already someone else’s signature song. It originated in France and was debuted by the chanteuse Mistinguett in 1916. The original lyrics make it clear that the singer is a prostitute singing about her pimp. An obvious rewrite for more parochial American tastes had to take place, so playwright and lyricist Channing Pollock came up with acceptable English lyrics – less “vulgar,” but still effective and affecting.

And Brice sang it straight. Brice was a celebrity, with a marriage that filled the headlines. Her husband Nicky Arnstein was a gambler and a con man, perpetually in legal trouble as well as, evidently, irresistible (his portrayal in the Funny Girl film by the suave Omar Sharif feeds that contention).

Full of feeling, dressed in a torn, dirty costume standing under a prop streetlamp (coming as close as America could to the implication that she was a streetwalker) she wowed the Follies opening-night crowd. People read into her interpretation the heartache the connection with Arnstein was causing. In just the same way today that fans sift through a performer’s output and project what they hear of their personal life onto the material. Brice’s emotional openness, vulnerability, and inclusiveness made the listener feel that this was her own story, not just an archetype.

Brice’s troubles undoubtedly resonated through the song, but the experience was generic enough to make it resonate with the listeners. There is another layer of interest, too – the novelty of a performer stepping outside their specialty, especially a comic artist being “serious.” Later, many supposedly lightweight performers would use a dark stage or film turn to legitimize their talent and raise their critical estimate.

Brice would turn from the stage to radio, scoring even more success as radio’s Baby Snooks, a misbehaving, truth-spouting brat who constantly subverted the adult expectations around her. She lived feisty. She said, “I lived the way I wanted to live and never did what people said I should do or advised me to do.”