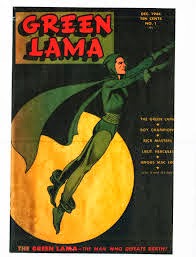 I live in Boulder, Colorado, and you can’t throw a brick around here without hitting a Buddhist. Believe me, I’ve tried.

(Of course, we are enjoying notoriety currently as the site of recent severe flooding. We were not victims, as we live on less valuable property on a ridge east of town. In a weird kind of anti-Katrina motif, many houses ruined by the flood are on the pricey end – because they overlooked the picturesque running water. Here’s my flood story: our cable went out. Sorry.)

Anyway, Eastern practices are alive and thriving here in Lotusland by the Rockies, where therapists of every ilk, Trustafarians (white Rastas), marijuana-industry professionals, organic Puritans, the digerati, academic theorists, exer-fascists, and eerily similar clumps of nonconformists intermingle like exotic species in a game preserve, fenced off from the mundane world.

So who would ever serve as Boulder’s superheroic champion? I nominate the Green Lama. I found this Golden Age champion via a short-lived CBS radio series that served as a summer replacement in 1949. Kendall Foster Crossen penned these episodes, based on his original pulp-fiction stories that first saw light in 1940. The unmistakable basso voice of Paul Frees embodied our hero.
The Green Lama is, in reality, the oddly named Jethro Dumont, another wealthy young socialite in the Batman tradition, whose parents conveniently orphan while he’s at Harvard. He differs from the Caped Crusader in that he studies for a decade in Tibet to gain enlightenment and purpose.

As the anonymous Wikipedia contributor succinctly states, "He returned to America intending to spread the basic doctrines of Tibetan Buddhism (remove ignorance and relieve suffering), but realized that he could accomplish more by fighting crime." 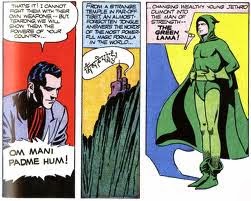 With the help of both his soul power and various other abilities (depending on the medium) including flight, invisibility, energy beams, and such, generated at least during his beginnings by the use of “radioactive salts,” he battles criminals, murderers, international cabals, and even the Axis. 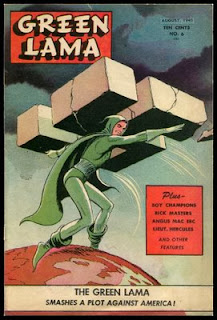 The idea of taking a spiritual practice a central pillar of which is Ahimsa, or non-violence, and making it fuel a two-fisted ethical vigilante’s struggle for justice is a unique American inversion of impulse. The air of Oriental mystery, coupled with Crossen’s accurate research and usage of Tibetan mantras, was meant to ape and rival the exploits of the more popular Shadow, who as Lamont Cranston learned the “power to cloud men’s minds” while traveling in East Asia. 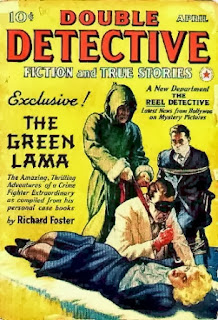 The Green Lama sprang to life in pulp fiction, then migrated to comics and radio, surprisingly reincarnating in various graphic-novel forms, and even a live aerial dance performance, in the recent past . . . coming back to life again and again just as a Buddhist does. Here in the land of yoga mats and TOMS, he could be the savior we muddy, unenlightened ones are looking for. 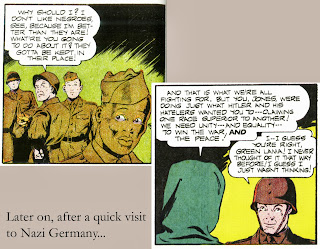