‘Castles in Europe One-Step’ aka ‘Castle House Rag’
Europe’s Society Orchestra
Composer: James Reese Europe
Recorded February 10, 1914
3:40
Here’s an unknown titan of American music for you, someone you should get to know. James Reese Europe was a composer, arranger, and bandleader who busted through all the color lines in his brief life. Eubie Blake called him “the Martin Luther King of music.” Why isn’t he better known?

When Europe was 20, he organized a large organization for black New York musicians called the Clef Club, which not only fielded an expert ensemble but served as union hall, booking agency, and meeting place. The 125-member Clef Club played Carnegie Hall on May 12, 1912, the first black group to do so.

Notably, they played what was recorded as “ragtime, blues, and minstrel songs,” in other words popular vernacular tunes instead of white compositions. American culture was just beginning to edge out from underneath the influence of Europe; “serious” black composers, with the exception of Scott Joplin, imitated the compositional techniques of “serious” white composers, who were aping European styles. “My success had come . . . from a realization of the advantages of sticking to the music of my own people.”

Europe’s decision to value and develop African American music was part of a groundswell of artistic assertion by important black composers. W.C. Handy published his “Memphis Blues” in 1912 as well, exploding a passion for blues in the general public. Jelly Roll Morton was touring the country at this time, working up his own repertoire.

Jazz was in the air, but this was not jazz. Europe headed a “society orchestra,” and that meant dance music. Enter Vernon and Irene Castle. 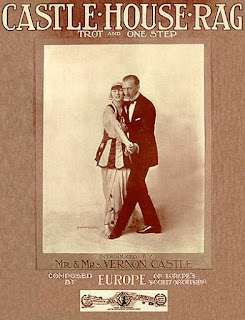 Here was an innovative celebrity couple, a ballroom-dancing couple who revolutionized social dancing in America. The two were suave, slender, and stylish, setting an elegant tone that people wanted to imitate. They succeeded in vaudeville, in Paris nightclubs, then on Broadway (Irving Berlin wrote his first show, Watch Your Step, for them in 1914).They popularized the ubiquitous foxtrot, and women bobbed their hair just like Irene, and switched to simpler, less cumbersome outfits, as she had. Above all, they made dancing look easy and fun.

The Castles were so popular that they could make their own rules. (They had an openly gay manager, Elisabeth Marbury.) The Carnegie Hall concert got their attention; they hired Europe and his band to accompany them – an extremely risky move at the time, as many areas forbade white and black performers working on stage together. However, the combination worked, and worked well, for a few essential years.

This “One-Step” is misnamed – it should be titled “Castle House Rag,” but whatever you call it, it’s a fast and furious expedition through raggy territory. The sheer mass of instruments being played gives the recording a harsh, undynamic wall-of-sound feel, buts its lively syncopations, derived somewhat from older dance forms but harnessed to the new rush and earnestness. Of particular note is the wild drumming codas of Buddy Gilmore – the first percussive solos on record.

World War I interrupted their careers. Vernon Castle joined the Royal Air Corps, and died in a training accident in 1918. Europe joined up as a lieutenant with the infantry regiment “The Harlem Hellfighters.” His military band traveled all over Europe, spreading ragtime and blues and igniting awareness of these new musics in the minds of listeners and composers there.

Europe was known for his stubbornness in following his own artistic path, and in insisting on professionalism from his musicians. After the war, Europe came back to the U.S. and got busy performing and recording. On May 9, 1919, he got into an argument with a drummer between shows in Boston. The man stabbed him in the neck, and he died later that day. He was 39.