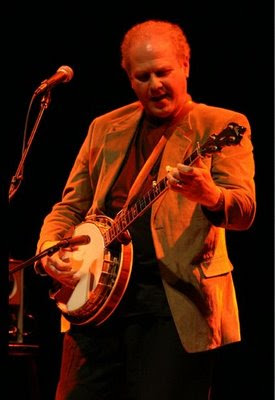 Banjo legend Pete Wernick is also one heck of a juggler.

In addition to his own group, Flexigrass, he performs as half of a duo with his wife, guitarist and singer Joan; as an addition to the relatively new local ensemble, Long Road Home; and of course an as integral part of the periodic reunion concerts given by the seminal progressive bluegrass group Hot Rize.

He also spends many weeks a year teaching at bluegrass camps across the country. He is editing two more instructional videos this month (he’s got seven under his belt, plus “about seven books”).

He writes a monthly column for Banjo Newsletter. He works diligently on his Web site, www.DrBanjo.com (over 150 questions answered in his “Ask Dr. Banjo” column to date!).

Oh yeah, did we mention a new Pete & Joan CD is in the works? And, hey, he just finished collaborating on Steve Martin’s new CD The Crow: New Songs for the Five-String Banjo, a departure into serious bluegrass for the famous comedian that has attracted a great deal of popular interest.

The two developed a friendship a few years ago, after Wernick learned that Martin cited him as an inspiration – “it was very strange to hear an icon of American culture saying that he admires me!”

They eventually met, jammed, and started hanging out together. Hot Rize wound up playing at Martin’s wedding in 2007. Martin began to work on some original banjo tunes.

In 2008, Martin passed around a demo recording of 18 pieces for possible use to Wernick, Tony Trischka and John McEuen, the last a friend of Martin’s since high school. The project jelled into being fairly quickly, with recording sessions last summer in the studio of Dae Bennett, Tony Bennett’s son, in New Jersey, a short distance from Manhattan over the George Washington Bridge.

Over 30 bluegrass and country greats ended up contributing to the recording. Wernick co-wrote one cut, “Words Unspoken.”

“Of those 18 initial pieces, I liked the last one, which was only about 30 seconds long,” he says. “I asked Steve, ‘What are you going to do with it?’” Wernick asked Martin if he minded if Wernick tried to add a second part to it.

“I wrote a second part for it, and we expanded it. Then I said, ‘It sounds like a song.’” The two wrote lyrics separately and then combined them over the course of a lengthy long-distance call.

(The album’s liner notes state that “the lyrics are practically finished,” and as yet it’s still an instrumental piece.)

Wernick doesn’t know if Martin is interested in touring with his music, and he wonders if the quiet, private writer and performer might like resuming the rigorous life of a touring performer.

Wernick certainly does. He is traveling quite a bit with Flexigrass, a heady mix of bluegrass and classic jazz sounds. Wernick is clear that the emphasis is on roots music with unique instrumentation, to wit: clarinet (Bill Pontarelli) in place of a fiddle, vibraphone (Greg Harris) in lieu of guitar, and drums (Kris Ditson) fulfilling what Wernick calls the “pulse function” of a mandolin.

The group, now in its 17th year, “carries the same kind of musical density” as a bluegrass outfit, says Wernick, and it’s been welcomed across the country.

Wernick appreciates events such as Merlefest “giving this kind of music a home.”

On top of that, Wernick recently joined the straight-ahead ensemble Long Road Home, working with Martin Gilmore on guitar, Justin Hoffenberg on fiddle, and Jordan Ramsey on mandolin, as well as Nashville Bluegrass Band vet Gene Libbea on bass.

“‘I’m dying to do (traditional) bluegrass,’” he told Hoffenberg when he was told that the band needed a banjo player. The group has been touring, and recording sessions last month in eTown Hall in Boulder should yield a live album in the near future.

Meanwhile, Hot Rize endures. The groundbreaking group, which stopped touring full-time in 1990, survived the death of guitarist Charles Sawtelle in 1999, reformed in 2002 with Bryan Sutton on guitar.

They return to the RockyGrass festival in Lyons, north of Boulder, in late July – and the rumor that Red Knuckles & the Trailblazers, Hot Rize’s wacky country-swing alter egos, are back is confirmed.

“The Trailblazers will be back this year,” says Wernick, smiling. “They did a long set at the Grey Fox Bluegrass Festival last year – nearly two and a half hours at the dance stage.”

Wernick still sees Hot Rize as his “peak experience,” a life-changing achievement that, in his eyes, “helped make Colorado a center for bluegrass.”

He sees his work as a teacher as his most lasting influence, however.

“You really affect people’s lives when you get them to play with others,” he says. “Many, many people love to play but they play by themselves, they are stuck in this box. We call it ‘closet picking.’ They stay in that stage, they get discouraged, and they give up. Playing well is only half of it – you have to learn to give and take with other musicians. So, hopefully, we save these people from undeserved oblivion.”

Taken all in all, how does he balance all these commitments? He states that he thinks and plans only about three months in advance, staying “pleasantly busy.” When he finds himself with an open week, he’s glad to catch up on things at home, his two acres north of Boulder, which is crossed by Left Hand Creek.

“People ask, ‘Do you have a little studio where you create?’” he says. “And I do – I have a funky little shack I built in the back, down by the creek. It’s strictly functional, not built for looks, and that’s where I work out a lot of my ideas. It’s so nice – a spot by a creek, a pleasant place to be.”

For more information about the Colorado Bluegrass Music Society, please click this link.
at July 15, 2009