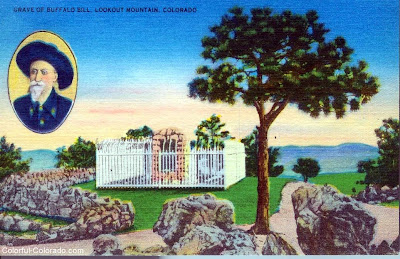 (An expanded version of an article originally published in 5280 magazine in 2007.)

Ninety-two years after his burial on the top of Lookout Mountain, does the spirit of Buffalo Bill still rest unquietly?

William F. Cody lived many lives in one. He was a Pony Express rider, trapper, prospector, Civil War soldier, Army scout, Indian fighter and, of course, buffalo hunter. What distinguished him from his frontier contemporaries such as Will Bill Hickock was his flair for self-promotion.

“He was known as the most handsome man in America, and was the best-known American in the world,” says prominent Denver historian Thomas J. Noel.

Beginning in 1872 with stage appearances in adaptations of the dime novels that brought him national fame, Cody established himself as the archetype of the bold plainsman, complete with fringed buckskin jacket, flowing locks and signature goatee.

Remarkably, he also set in stone the popular vision of the American West. Having hatched the idea of an “Old Glory Blow-Out” in his home town of North Platte, Nebraska on July 4, 1882, which is often cited as the origin of the rodeo, Cody (with the able assistance of manager Nate Salsbury and pioneering press agent John M. Burke) created Buffalo Bill’s Wild West show.

From 1883 to 1913, it traveled the world, crafting out of a collection of riding, roping and sharpshooting exhibitions and a band of cowboys, Native Americans, and vaqueros a “national entertainment” that appealed to all classes and ages alike, and delivered the legend of Manifest Destiny as a historical pageant. “Re-enactments” of the Pony Express, Indian attacks, stagecoach robberies, and even Custer’s Last Stand kept crowds that ranged from, literally, the crowned heads of Europe to throngs of orphans, enthralled. Packaged as living memories of a disappearing era, it taught two generations ways of thinking about the West that are still passed along in the media today. “Pahaska” (the Sioux name for Bill, meaning “Long Hair”) was one of the first international celebrities.

It’s ironic, then, that the frontier scout whose reputation as a pathfinder was justly unparalleled should find himself so far from home. In 1907, Cody’s will dictated that he be buried near his namesake town of Cody, Wyoming. However, as the years passed, so did Cody’s business acumen. The debt-ridden showman had placed himself in the power of the unscrupulous co-owner of the Denver Post, Henry Tammen, who auctioned off the assets of the Wild West show in Denver in 1913, and used Cody’s indebtedness to him to force him to act as master of ceremonies for his Sells-Floto Circus from 1914 on.

By the time the 70-year-old Cody died in the home of his sister at 2932 Lafayette St. on Jan. 9, 1917, of uremic poisoning brought on by kidney failure, his will was no longer his own.

It has long been rumored that Tammen, with the aid of a $10,000 bribe to Cody’s estranged widow Louisa, conspired to have him interred against his wishes in Colorado, the better to profit from the late scout’s corporeal presence. Both Cody and North Platte clamored for the right to bury him.

“Everybody realized that it would be great tourist attraction,” says Noel.

Cody’s funeral was held in Denver on a freezing Jan. 15, 1917, with thousands filing past his body in state at the capitol building. His body was then placed in the Olinger Mortuary at 2600 16th St., supposedly under armed guard, for six months, while the authorities waited for the dirt roads that led up the mountain west of Golden to become passable. (The body was re-embalmed six more times.)

On June 3, 1917, a motorcade ferried what was estimated as between 7,000 and 20,000 mourners to the summit of the peak to pay final homage to the “knight of the saddle,” as News correspondent Meredith Davis floridly referred to him. The widow ordered the casket opened, and poems, songs and trumpet fanfares stirred the summer air as attendees filed past the coffin for a final glimpse of their hero. At 3 p.m., the coffin was lowered into the concrete-lined vault; a photograph shows the words “BURGLAR PROOF GRAVE VAULT” embossed on its side.

Just to make sure, several tons of concrete, reinforced with iron rails, eventually topped the gravesite. The undertaker is said to have stated that grave robbers “would have to blow the top off Lookout Mountain” to get at the body. In fact, when his wife Louisa died in 1921, it proved impossible to dig down to his level – so they buried her on top of him, sealing them both in with more concrete.

Meanwhile, Cody’s adopted son and Wild West sharpshooter Johnny Baker proposed in 1920 that the city of Denver allow him to construct a building adjacent to the grave to house Buffalo Bill memorabilia, as well as “the sale of the Colonel’s books, postcards, photographic views, candies, and light refreshments.” The deal was struck, and the “Pahaska Tepee” was built.

Still, the controversy wasn’t over. Serious calls for the repatriation of Cody’s corpse continued as late as 1948, once prompting the National Guard to drive a tank up Lariat Trail Road to stand guard over Bill’s remains.

The museum/gift shop’s rag-tag assemblage was presided over by Baker until 1931, and by his widow until 1956. The city took over the site, and a freestanding museum building was finally completed nearby in 1979. Today, it is presided over by director Steve Friesen, who in 12 years has crafted a more interesting and even-handed display of Cody’s life and legacy than visitors have ever before enjoyed.

“Every once in a while somebody up in Wyoming gets a wild hair going,” he says of disgruntlement over Buffalo Bill’s final resting place. As recently as last year, he states, consultants in Cody recommended a renewed effort to disinter the pioneer.

“They said, ‘You need to get Buffalo Bill’s body here,’” he chuckles, and goes on to characterize the repositories of Buffalo Billiana as sharing “a good-natured rivalry.”

So Buffalo Bill still sleeps ‘neath Colorado skies, trapped under the wife he avoided in life, catching the pitched pennies tossed on his tomb for luck by travelers, still a moneymaker through the auspices of the nearby gift shop, still a showman in death.

“It’s pretty up there,” Louisa Cody reported her husband saying of Lookout Mountain shortly before his death.

Tom Noel chimes in with a wry quote from Voltaire -- “History is a pack of tricks the living play upon the dead.”
at July 20, 2009

Email ThisBlogThis!Share to TwitterShare to FacebookShare to Pinterest
Labels: Behind the Scenes, Denver, History