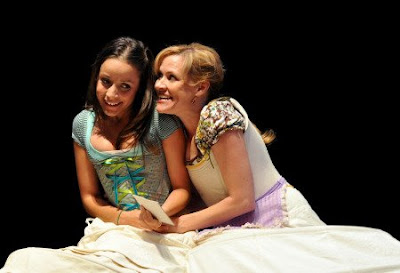 Jamie Ann Romero as Julia and Karyn Casl as Lucetta in the Colorado Shakespeare Festival's production of "The Two Gentlemen of Verona." (Photo by Kira Horvath for CU Communications)

Not an inspiring opening. OK, guys, “The Two Gentlemen of Verona” is, by critical consensus, Shakespeare’s first play. As such, it doesn’t rate very highly on the Bardometer.

The Colorado Shakespeare Festival’s production of the play suffers from a desperate sense of shame. Sure, “Two Gentlemen” . . . well . . . the script kinda stinks. In his introduction to the play in the Oxford edition of Shakespeare’s Complete Works, Stanley Wells even admits that “the play has succeeded best when subjected to adaptation.”

So the team for “Two Gents,” led by director Tom Markus, constructed conceptual scaffolding for it. Beyond that, they built an entire play about doing the play around it. With extraneous characters, loads of extra dialogue, and digressions that involve limericks, the hokey-pokey, insights, and such.

It’s a late rehearsal of a CSF production of “The Two Gentlemen of Verona.” (Bruce Bergner’s set works well.) The actors are in a mix of costume pieces and street clothes. The production’s haughty English director outlines his concept, the actors grumble, drink, and talk on their cell phones. These scenes are interspersed with those from the play. The result is not so enjoyable.

Now, I don’t mind anyone monkeying with Shakespeare. Not any more. I have seen “The Tempest” in outer space, “King Lear” as a Western, “Titus Andronicus! The Musical,” a Desert Storm “Julius Caesar.” I have seen 10-minute, and 8-hour, “Hamlet”s. Adapt away.

But make it work. CSF’s “Two Gents” doesn’t work because a) it doesn’t trust the material and b) it gives us something worse in supplement to it. A good try, but let’s move on.

Everyone does their best with what they’ve given to work with. Actually, the “Two Gentleman” scenes are fine, with moments of comic invention and pathos. Despite the constant interruptions, Matt Mueller makes something out of Proteus, and Jamie Ann Romero proves as adept comically as Julia as she did dramatically as Ophelia in the concurrently-running CSF “Hamlet.”

Alexandra C. Lewis is a perfect figure of grace as Silvia, Sam Sandoe has some fun as her father, the duke of Milan . . . and of course who doesn’t love those kooky outlaws.

Listen: we’re Shakespeare fans, we’re tough, we can take it. Let’s face it, not every word out of him was of the highest caliber. But hey! This is a Shakespeare festival and sometimes you just have to suck it up and do it.

For instance, I’m sure we’ll have to run into “King John” again someday. Just don’t bring him in at the end, when he’s dying, on a surfboard or a giant French fry or anything like that. Unless it works.

“The Two Gentlemen of Verona” is presented by the Colorado Shakespeare Festival on the campus of the University of Colorado in Boulder through Aug. 9. Ticket prices range from $14 to $54 each; however, there are discounts for multi-show purchases, CU students, staff and faculty; and those under 18. For more info, please visit www.coloradoshakes.org or call 303-492-0554.
at July 28, 2009