CULTURAMA: "Much Ado About Nothing" at the Colorado Shakespeare Festival: Perfect fools 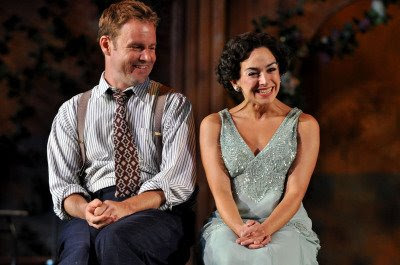 Geoffrey Kent as Benedick and Karen Slack as Beatrice in the Colorado Shakespeare Festival production of "Much Ado About Nothing." (Photo by Kira Horvath for CU Communications)

Luckily, Shakespeare’s comedies are, by and large, actually funny. It takes an astute director and ensemble to flesh out the promise of those gags and the real feelings couched in that antiquated language. The Colorado Shakespeare Festival’s production of the romantic comedy “Much Ado About Nothing” is blessed with that – and it’s triumphantly hilarious, one of the best shows they’ve staged in recent memory.

This show will cure anyone with Shakespeare-itis. You know if you’re afflicted – your eyes begin to roll back into your head when you hear iambic pentameter, doublets and hose give you the conniptions, and you fall into a narcoleptic coma well before the end of Act V.

Well, there are reasons the Bard is the Bard. He knows how to tell a story, he knows how to write dialogue, his characters are lively and intense. No amount of horrible English classes or other forced indoctrinations to his work will change that.

At CSF, everyone from director Lynne Collins down to the humblest supernumerary is focused on the same thing – making us laugh. They succeed splendidly. Collins has set her ensemble free: free to find the funny and work it. The dreaded Shakespearean language barrier is vaporized; you can follow the action with the same kind of relaxed clarity the players being to their performances.

The production is set in summery Spain in the mid-1930’s, a time when liberalism and conservative values warred bloodlessly, until the region tipped into civil war at the end of the decade. The warm, bright colors of Andrea Bechert’s attractive, straightforward set, anchored around a functional fountain in its center, give the proceedings a cartoonish flush.

The gist of the matter is love lost, found and confused. Geoff Kent and Karen Slack are perfectly matched as the witty, warring Benedick and Beatrice, two madcap personalities who are tricked into revealing their true feelings for each other. Neither is afraid to bend the play’s language, play with its rhythm, bring the audience into their confidence, or break up a speech with an apt bit of business or touch of physical comedy.

The play’s second, “serious” couple, Hero and Claudio are equally well-drawn by Caitlin Wise and Ben Bonenfant. The paterfamilias of the piece, Leonato, is played so adeptly and with such gravitas by Sam Gregory that he seems to gather the moral focus of the piece. Whether the trickster or the tricked as the plot demands, he radiates authority and emotion in clear and ringing tones.

Steven Patterson is just great as Don Pedro, the brother-in-arms of Benedick and Claudio. His rough-hewn, teasing soldier’s wit is pitched perfectly. The biggest surprise of the night is Michael Kane. He begins the evening as the peevish villain of the piece, Don John (his agonized melancholy is a great choice for the character) and then reappears, unrecognizably, as the affable, demented and stooped constabulary sidekick, Verges.

His crime-fighting partner is Chip Persons, as wonderfully daft a Dogberry as I can remember seeing. Clad in beret, luxuriant mustachios, and crossed bandoliers, he murders the language and the crowd with his stylized gestures and blissful ignorance.

It takes great diligence to strip away the layers of scholarship, and the intimidating reputation of Shakespeare, to get to the essence of his work and make a compelling show out of it. “Much Ado” does. Anyone who needs a laugh should snap up tickets for this show as soon as possible.

“Much Ado About Nothing” is presented by the Colorado Shakespeare Festival on the campus of the University of Colorado in Boulder through Aug. 7. Ticket prices range from $14 to $54 each; however, there are discounts for multi-show purchases, CU students, staff and faculty; and those under 18. For more info, please visit www.coloradoshakes.org or call 303-492-0554.
at July 13, 2009