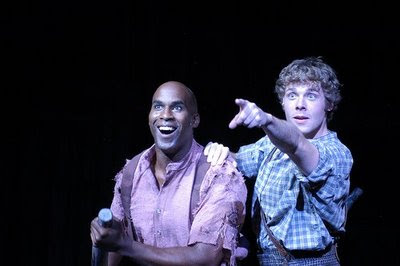 When the Arvada Center opened in 1976, no one thought that it might one day become a regional center for professional-quality theatrical productions. The main stage, for instance, was poorly designed and had extreme technical limitations. Ambitions, likewise, didn’t extend much past the community-theater level.

After decades of patient effort, and thanks largely to the vision of Artistic Producer Rod Lansberry, the Center is a success story. Case in point: its current production of “Big River,” the award-winning musical adaptation of Mark Twain’s classic novel “The Adventures of Huckleberry Finn.”

Of course, it would be difficult for an adapter to ruin the original’s charm, but what makes the work soar is its score. Roger Miller’s brilliant roster of songs is reason enough to attend a performance, and “River in the Rain” is already a standard.

Before “Big River,” there was country sound on the Broadway stage – at least faux country. The Gershwins used Nevada as a gimmick setting in “Girl Crazy” in 1930, and shows such as “Oklahoma!”, “Shenandoah” and “The Best Little Whorehouse in Texas” gave nods to the flavor and instrumentation of rural acoustic music.

But Miller, the country composer/performer who had already won more Grammy awards than anyone would until Michael Jackson came along, was the real deal. He was more than equal to the occasion, using the genre in an effective, expressive way. In “Big River,” for which he won a Tony award, he crafted songs that not only capture but augment and supplement the original material.

Despite the adolescent high jinks, the emotional center of the piece is Jim, the escaped slave and Huck’s bosom companion who travels down the Mississippi with him. (Twain’s Jim was the first instance of a white writer coming within spitting distance of portraying a black character as a dimensional human being.)

Hauptman and Miller use “Big River” to open up the work past Huck’s first-person perspective, illuminating Jim’s suffering. Passages such as “The Crossing” and “Free at Last” show the underside of Twain’s universe – institutionalized slavery as a poison that ruined the souls of the enslaved and the enslavers.

Vocally, the cast sparkles – in particular, Gabrielle Goyette and Valisia Lekae pull out all the stops during their solos. Alan Shaw’s Huck, though ingratiating, is overshadowed by the immense presence of Alan H. Green as Jim. Other standouts include Kitty Skillman Hilsabeck as the sour and proper Miss Watson, and Emily van Fleet as Mary Jane Wilkes.

The biggest delight of the evening is the duo of rapscallions, the King (Eric Leviton) and the Duke (Jim Newman), two con artists who hijack Jim and Huck, using them to help them fleece the populace as they float downriver. Newman’s hopelessly awful pseudo-Shakespearean pomposity, combined with Leviton’s drawling sarcasms, makes every moment with them on stage a pleasure.

Knowing the story won’t preclude enjoying seeing it in this incarnation. Those who don’t know it will find “Big River” a stirring, entertaining introduction.