"Hamlet" at the Colorado Shakespeare Festival: a bloody conundrum 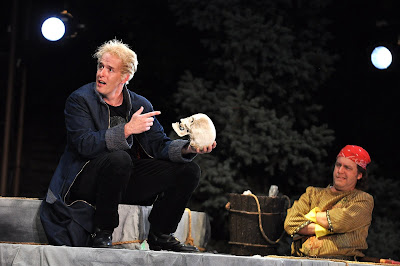 Stephen Weitz as Hamlet, and Gary Wright as the Gravedigger, in the Colorado Shakespeare Festival's production of "Hamlet." (Photo by Kira Horvath for CU Communications)

The Colorado Shakespeare Festival is a juggernaut. On it rolls, cranking out the Bard’s works for the delectation and edification of its audience.

This isn’t such a terrible thing. I used to think, “Better no Bard than bad Bard,” but let’s face it – it’s so damn difficult to do well. Theater people don’t tackle Shakespeare; they dash themselves at it, like climbers at Annapurna. Sometimes they make it to the summit – and sometimes they die.

Whatever happens, they learn, as do the audiences that witness their work. Such is the case with the production of “Hamlet” that opened the CSF season. It’s an uneven effort that communicates the gist of the play without ever really getting off the ground.

CSF’s Producing Artistic Director Philip C. Sneed is the director, and he sets the play in a provisional space of unfinished, propped-up forms (Andrea Bechert’s scenic design). Similarly, the actors are costumed in a hodgepodge of overlapping styles – doublets and jeans, T-shirts and dusters. Claudius is swathed in what looks like yards of Persian carpet, topped like an Assyrian frieze (Clare Henkel put the costumes together).

The intent is to provide the audience with a sense of time out of joint, to paraphrase Hamlet himself. The spare approach to the staging is appealing, but the admixture of styles weakens the play’s impact and is distracting to boot. Anything that takes the focus off this difficult piece should be jettisoned.

According the to production’s dramaturge, “we examined the three printed versions of ‘Hamlet’ line by line, taking some lines from each in order to create what we judged to be the most interesting and compelling version of the play.” That’s well and good. What’s there makes sense. A lot is chopped out, too – also good, since only the hardiest venturers can endure an unexpurgated version of “Hamlet.” I miss Fortinbras, though.

Despite the streamlining, and the attempts to universalize it by unmooring it from specificities, the visceral fascination of the play is missing. The players themselves seemed distanced from the material. There are a number of funny moments that . . . well . . . really oughtn’t to be funny, you know? It’s a solid, legible effort, but unaffecting.

As for the performers, the best are the Polonius trio. Sam Sandoe’s Polonius is spot-on – he’s the pompous, well-meaning fool Shakespeare wrote him to be, and his clear tenor voice is a model of clarity and communication. Jamie Ann Romero’s Ophelia slides convincingly from coyness into madness, and Mat Hostetler as her brother Laertes is refreshingly straightforward. Gary Alan Wright, who doubles as Hamlet’s father and the Gravedigger, is properly spooky as the former and a riot as the latter, with a little help from sidekick Alex Malone.

Stephen Weitz has an uphill battle as Hamlet. He’s the linchpin of a confused production, which hampers him. Still, he struggles manfully on, giving full play to the main character’s nimble intellect and sense of humor, if not convincingly his passion (note: not his intensity, his passion – big difference).

It doesn’t help Weitz that his nemesis, Claudius, is portrayed by someone out of his depth in the role. (Caveat lector: this actor is a well-respected regular at the festival, about whom I have caviled time and time again . . . sorry I couldn’t be more positive yet again this time.) Claudius as written is a commanding, manipulative villain. This one doesn’t look like he’d be comfortable making decisive dinner reservations, much less executing a plan to murder his brother and nail his sister-in-law.

“Hamlet” is presented by the Colorado Shakespeare Festival on the campus of the University of Colorado in Boulder through Aug. 9. Ticket prices range from $14 to $54 each; however, there are discounts for multi-show purchases, CU students, staff and faculty; and those under 18. For more info, please visit www.coloradoshakes.org or call 303-492-0554.
at July 08, 2009