CULTURAMA: Tenderness and tragedy -- "To Kill a Mockingbird" at the Colorado Shakespeare Festival 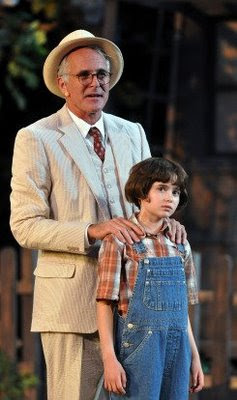 Sam Gregory as Atticus Finch and Ellie Schwartz as Scout in the Colorado Shakespeare Festival's production of "To Kill a Mockingbird." (Photo by Glenn Asakawa for CU Communications)

One definition of a classic is something that rewards repeated encounters with new meanings.

Such is Harper Lee’s Pulitzer Prize-winning 1960 novel, “To Kill a Mockingbird.” Its first-person evocation of a childhood in the American South, its gripping tale of prejudice, courage and empathy, struck a chord with readers immediately.

Since then, its impact has never diminished. The 1962 Oscar-winning film adaptation is itself a deeply affecting work. The book is taught in our schools, and sometimes it’s banned in our libraries (use of the ‘n’ word and frank talk about rape cited as reasons).

It should be no surprise that the Colorado Shakespeare Festival might see it as a fit work to stage. The current production, under the direction of the incredibly gifted Jane Page, is strong and compelling, a classic in every sense of the word.

Firstly, the story itself is brilliant – compelling and insightful. Christopher Sergel’s adaptation of the play, first staged in London in 1988, is a skillful translation of the work’s essence.

Over her career, Page has demonstrated her ability to summon the best out of both the materials and the ensemble at hand, on and backstage. This “Mockingbird” is no different. The pace and tone fit the piece perfectly, and the cast seems sprung from its pages.

The production frames the tale as a memory play, narrated by the now-grown Jean Louise Finch (played gracefully here by Tammy Meneghini). In truth, the story is so familiar to most that it could be played on a bare stage. The actors are key here, and a particular difficulty is finding the right child actors to play the young Jean Louise – the scruffy, feisty “Scout” – and her older brother Jem.

Fortunately, Ellie Schwartz and Connor Schearrer are great as Scout and Jem, respectively. Alex Rosenthal does similarly as their temporary neighbor and friend, Dill. The three children refract the events of Scout’s remembered 1935 summer in their tiny, dusty Alabama town through their personalities, and the actors let those lights shine through.

The most daunting role of all, of course, is that of Atticus Finch, the children’s father. A principled, modest hero who takes on the hopeless case of a black man charged with the rape of a white woman, the role is tough enough to begin with.

Then, consider that every actor who takes on the role must contend with the enormous shadow cast by Gregory Peck’s indelible portrayal in the film. It’s difficult to cast that interpretation out of your mind and make the role your own.

Sam Gregory, who also essays a great Leonato in CSF’s current production of “Much Ado About Nothing,” is an exemplary Atticus. He takes an impossibly good character and gives him humanity. The same is true for Doug Bynum as Tom Robinson, the condemned man who faces no chance of acquittal from the all-white jury judging him.

Other standouts include Steven Patterson as the conflicted sheriff Heck Tate, Kristen Adele’s Calpurnia, Michael Kane in the small but crucial role of “Boo” Radley, and Chip Persons and Emily Schmidt-Beuchat as Robinson’s accusers, the dastardly Ewells.

But Harper Lee imbued it with a magical, unforgettable quality, and it is with us now, for better or for worse. I think we are the better for it. Thanks to the Colorado Shakespeare Festival, that vision lives onstage as well.

“To Kill a Mockingbird” is presented by the Colorado Shakespeare Festival on the campus of the University of Colorado in Boulder through Aug. 5. Ticket prices range from $14 to $54 each; however, there are discounts for multi-show purchases, CU students, staff and faculty; and those under 18. For more info, please visit www.coloradoshakes.org or call 303-492-0554.
at July 22, 2009