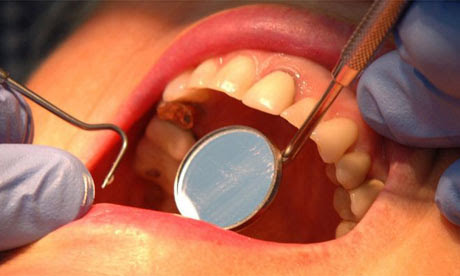 In honor of National Tooth Fairy Day on Aug. 22, a salute to those brave men and women who work inside your mouth for a living:

Nobody likes the dentist, and it seems that dentists aren't too thrilled about their careers, either. Packed away in a periodontal purgatory among the gauze, Novocain needles, drills and other detritus of the profession are dreams, moments of glory and just plain strangeness that come to light only sporadically.

London dentist Martin van Butchell was remarkable not only for his personal sense of style - on the street, he dressed all in white, rode a pony painted with purple spots, and wielded in his hand a large bone attached to his wrist by a string.

He also had a way with the ladies, if they were dead. Evidently, van Butchell's marriage contract stated he could hang on to certain properties as long as his wife Mary "remained above ground."

When she died on Jan. 14, 1775, he had her embalmed by two of the leading surgeons of the day. Clad in a lace gown, equipped with glass eyes, and kept in a case with a glass lid, Mary presided over Martin's waiting room for years, serving as a gruesome draw for inquisitive potential patients.

Van Butchell's display of his dead wife as an advertising tool lasted until a new Mrs. van B entered the scene and demanded the removal of her predecessor. Mary was taken in by the Museum of the Royal College of Surgeons, which housed her until her remains were destroyed in a German bombing raid during World War II. She had been on display for 167 years.
WHAT'S UP, DOC?

John Henry Holliday was a promising, highly educated dentist from Georgia when he was diagnosed with tuberculosis at the age of 22. He was given only a few months to live, and he moved in the summer of 1873 to Dallas (it was then thought that the dry climate of the American Southwest was beneficial to the tubercular).

His constant cough frightened away his patients, and Holliday began gambling. He soon realized it was more profitable than pulling teeth.

By 1878, after several scrapes with the law, "Doc" Holliday stopped practicing his vocation entirely and became a professional gambler and gunman. He would participate in the famous "Gunfight at the O.K. Corral" in 1881, survive it - and die peacefully in Glenwood Springs, Colorado in 1887.

Thomas W. Evans' migration to Paris in 1847 made him the confidant of royalty and an unacknowledged shaper of history.

His services became valued by Second Republic President Louis-Napoleon Bonaparte, who seized power and named himself Emperor Napoleon III in 1852. During the Civil War, Evans was sent by Napoleon on a confidential diplomatic mission to determine the probable outcome of the war, as England had recognized the Confederacy and was urging France to do the same. Evans met with Lincoln and Grant, and his report staved off Gallic support for the Rebel cause.

On Sept. 2, 1870, Napoleon and his forces were crushed by the Prussian Army at the Battle of Sedan. Two days later, he was deposed. His wife, the Empress Eugenie, was threatened by mobs in front of the palace at the Tulieries. She fled with her friend Madame Lebreton to Dr. Evans' residence, at 43, Bois de Boulogne.

The next day, the two were smuggled out of the city disguised as two feeble patients of the doctor, dressed in Mrs. Evans' clothing.

Eventually, Evans and his charges successfully made their way to England, where Eugenie was reunited with her exiled husband. When Evans eventually retired and returned to America, he had accumulated over 200 honors bestowed on him by various European powers.

WINE WITHOUT THE BUZZ

Thomas Bramwell Welch immigrated to America with his family when he was nine, in 1834. A devout Methodist and abolitionist, as a young man he was part of the Underground Railroad that smuggled escaped slaves to Canada.

He was ordained as a minister at the age of 19. After losing his voice, he retrained himself as a physician, specializing in dentistry.

He was also a teetotaler. Concerned that wine's integral part in Christian communion made the ritual unsuitable for alcoholics ("an ugly episode of overindulgence" by a visiting minister to his home was a key event), he sought to perfect an unfermented grape juice as a substitute. In 1869, he discovered a way of pasteurizing it so that it remained non-alcoholic.

Oddly, churches and other customers didn't take to "Dr. Welch's Unfermented Wine" right away. 21 years later, until the leadership of his son Charles, Welch's grape juice became a national sensation.

WINNER BY A KNOCKOUT

Before nitrous oxide and ether were discovered as anesthetics, they were put to a time-honored use: as a way for medical students to get wasted. This took place at "parties" during which participants inhaled the substances and went about blithely and merrily injuring themselves, with no memories of having done so later.

In January, 1842, one such student, William A. Clarke, was home on break in Rochester, New York in January, 1842. There he used ether on the sister of one of his classmates, painlessly extracting her rotten tooth.

When Clarke later informed one of his instructors of his success, he was told that the lack of pain was probably due to "the hysterical reaction of women to pain." He dropped his experiments with the chemical.

In December 1844, traveling dentist Horace Wells, fascinated by the antics of citizens under the influence at a nitrous oxide demonstration in Hartford, Connecticut, used that gas on himself to have a molar removed without discomfort. Soon he was advertising his "painless dentistry," but a demonstration of his new technique in 1845 at Massachusetts General Hospital failed, leaving him open to ridicule.

One observer at Wells' unsuccessful demonstration was a former business partner of his, Dr. William Thomas Green Morton. He sought a stronger chemical agent for inducing unconsciousness and consulted his chemistry professor, Charles T. Jackson, who suggested ether.

On Sept. 30, 1846, Morton successfully used ether to remove a molar from his partner in practice. 16 days later, a successful public demonstration of ether at Massachusetts General made Morton famous.

Morton, Wells, and Jackson fought viciously for the title of Discoverer of Anesthesia, bringing the battle all the way to the U.S. Congress. Only the deaths of all concerned ended the controversy:

Morton died of a cerebral hemorrhage in 1868; Jackson, who also claimed to have invented the telegraph and cellulose nitrate ("guncotton"), went insane in 1873 and died in an asylum seven years later.

Wells became addicted to chloroform, and ended up committing suicide in 1848 while incarcerated in Tombs Prison in New York for throwing acid on two prostitutes- slitting his femoral artery (after inhaling chloroform, of course).

On Aug. 7, 1881, a drunken dock worker named George L. Smith visited the Brush Electric Light Company in Buffalo, New York. Eager to feel the reported tingling effects of proximity to an electric generator, he put his hands on it - and was promptly electrocuted.

The news of his death reached Buffalo dentist Alfred P. Southwick, who had a bright idea: electricity as a painless, more humane form of taking life than any previously conceived. After months of experiments on unwanted animals donated by the local SPCA, Southwick began to petition government officials to replace hanging with electrocution. (A chair was decided on in part due to Southwick's accustomed use of one with his dental patients.)

The New York legislature put such a law into effect on Jan 1, 1889. On Aug. 6, 1890, William Kemmler was the first man scheduled to "fry." The first attempt left Kemmler groaning as the smell of burning flesh filled the air. The supposedly painless procedure took two tries and eight long minutes.

Thomas Edison, reading a report later, cited "bungling"; George Westinghouse said, "They could have done it better with an axe."

To these observations, Southwick defiantly replied, "A party of ladies could sit in a room where an execution of this kind was going on and not see anything repulsive whatsoever. No sir, I do not consider that this will be the last execution by electricity."

He was right. Although its use has largely been abandoned worldwide, six U.S. states still allow its use.

Zane Grey made the safe choice, at first. Despite his prowess on the baseball diamond - he was a star on the University of Pennsylvania team, and dreamed of a career in the majors - he followed his father into the profession of dentistry.

The year 1897 found him practicing in a tiny office at 117 W. 21st St. in Manhattan, a then-poor, immigrant-crammed neighborhood. He punctuated his dreary work week with periodic camping trips upstate; there his met his future wife Dolly. Her small inheritance and encouragement, along with conversations with his mother about his ancestors' pioneer adventures (among other things, they found Zanesville, Ohio) led him to begin writing magazine articles and novels about outdoor life and adventure in his office after hours.

After years, the effort began to pay off. Finally, he decided to escape the city, quit his profession and try writing full-time. On Sept. 27, 1904, he closed on a property in Lackawaxen, Pennsylvania. Settling there, he began a prolific and profitable career as a writer of Westerns, including the classic "Riders of the Purple Sage."

Ben L. Salomon was a 26-year-old dentist from Los Angeles when he was drafted in the fall of 1940. He had attained the rank of infantry sergeant in 1942 when he was ordered to become an officer in the Dental Corps.

In May, 1943, Lieutenant Salomon was assigned to the 105th Infantry Regiment as its dental officer. On June 15, 1944, the regiment was part of the invasion of the Japanese-held island of Saipan. On June 22, Salomon, newly promoted to captain, took over for the surgeon for the Regiment's 2nd Battalion, who had been wounded in a mortar attack.

By July 7, the Japanese forces had been reduced by 90 percent, to a total of 3,000. The commanding general, Saito, ordered a last desperate mass suicide attack on the American lines - the largest in history of the war in the Pacific.

Salomon was operating an aid station 50 yards behind the lines when the attack commenced. His position was soon overwhelmed, as he fought off seven attacking Japanese soldiers while tending to the wounded. Finally, he ordered all who could retreat while he covered their escape.

The battle ended two days later. The 1st and 2nd Battalions were nearly decimated. When survivors returned to the aid station, they found Salomon's body behind a machine gun. The bodies of 98 enemy soldiers lay piled in front of him -- so many that he had been forced to pull his weapon back four times to obtain a clear field of fire. There were 76 bullet holes in Salomon's body.

After decades of persistent effort on the part of Salomon's comrades, Salomon was awarded the Congressional Medal of Honor posthumously on May 1, 2002.
at August 24, 2009