OK, freaks – I mean, folks. To be an opera lover means having an excellent sense of humor about the whole thing. For every sincere aficionado of music drama, there is a horde of unbelievers who flinch at the sound of an aria, and which equates opera with a refined and expensive form of torture.

That’s not to say that opera doesn’t deserve a little elbow to the diaphragm at times. As a high-risk, complex, expensive synthesis of several arts forms, it’s tough to produce well . . . and like the girl with the curl, when it’s bad, it’s horrid. It’s also been typed as an affectation of the rich – which makes disdaining its challenges a populist nose-thumbing delight.

And why not? The proposition of a sung story enacted is on its face absurd – it takes time to get used to the conventions and suspend your disbelief as never before. Opera neither requires nor desires internal logic, verisimilitude, or even believability. We need the plot to hurry up and get the hell out of the way so we can go completely, decadently emotional. Don’t you feel a little silly sometimes? Honestly?

When you do, put a few of these on. Get it out of your system.

The list of audio-only operatic prankings is long, beginning as early as vaudeville, judging by Cal Stewart's Uncle Josh character in the "Opera at Punkin Center" recording of 1909, and Willie and Eugene Howard’s “After the Opera” sketch, first recorded in 1925. It’s also worth mentioning and diving into the long and hilarious discographies of Anna Russell, Spike Jones and His City Slickers, Tom Lehrer, Victor Borge, and Peter Schickele for a start.

For Wagnerians, Charles Ludlam’s 1977 stage sendup Der Ring Gott Fablonjet is a priceless read, but a staging much less a recording is not on the horizon (though I’d love to). The cliche of the helmeted diva has been around almost since the Ring cycle was first performed, certainly because it’s easy and fun to mock. It can be found scattered across modern culture and media, morphing to fit the needs of ‘60s absurdism in Clive Donner’s 1965 What’s New, Pussycat? as well as the avant-garde sci-fi conceits of Luc Besson’s The Fifth Element in 1997, when he hands ‘Il dolce suono mi colpi di sua voce’ from Lucia di Lammermoor to the giant blue Diva Plavalaguna.

So, here’s a nice selection of comic cadenzas from film and TV, ranging from the innocent and playful to the dark and NSFW.

A Night at the Opera/Dir: Sam Wood, Edmund Goulding/1935

Of course. The sendup of all things pompous in the opera world, culminating with Il Trovatore here, is merciless, a template for all future comic-disaster sequences in film.

Alfalfa is “King of Crooners,” but he wants to be an opera star! “I’m the Barber of Seville, Figaro, Figaro!” he sings. Everyone hates him, and he ends up singing in the gutter as the snow cascades arund him. He relents. “I wanna croon!” he admits, before waking from his cautionary dream. Opera is clearly a ticket to the bottom.

Danny Kaye plays twins, one a shy scholar and the other a wacky nightclub entertainer. The comic witnesses a murder, gets killed himself, then inhabits his twin’s body as needed to solve said crime . . . and provide typical Danny Kaye bits. With me so far? At the climax, he must interweave testimony with an operatic duet.

There are only two kinds of people in this world, so if you don’t like the Three Stooges, let your gaze lightly vault over this obnoxious entry. There now, for the rest of us what could be more fun than Curly impersonating the not-so-ravishing Senorita Cucaracha? The butchering of the Sextet from Lucia di Lammermoor would be repeated with variation three years later in Squareheads.

The Whale Who Wanted to Sing at the Met AKA Willie the Operatic Whale/Dir: Clyde Geronimi, Hamilton Luske/from Make Mine Music, 1946

This is the 10th and final sequence from the 1946 Disney anthology film Make Mine Music, one of a string of six short-subject collections the studio put out during the 1940s. This was in response to the loss of animators, and markets, to the war effort. This sequence is a wonderful little fantasy, with narration and voicings by Nelson Eddy (Disney uses multitrack recording here for one of the first times). It ends tragically, in line with operatic tradition – and I personally mark it as another soul-crushing moment in a long life of Disney-inspired trauma.

This takeoff on the Sextet from Lucia was first used in Show Business and repeated in Susie; Cantor and Davis had a comic affinity as well as an offscreen romance. Susie was Cantor’s last starring movie role.

Chuck Jones’ mastery of animated comedy was such that these are not only the funniest and most familiar opera parodies in our culture, but three of the best Bugs Bunny cartoons, period.

I have no idea why Gene Wilder inserted a long parody of Un ballo in maschera here (it does forward the plot, much as in Wonder Man), but I’m awfully glad he did. Few actors could pull it off better than Dom DeLuise and Madeline Kahn. “Stop that, you’re such as tickle-tease/You know I’m super passionate . . .” Classic.

It can be read either as a condemnation of opera’s bloody absurdities, or . . . no, actually, that’s the only way it can be read. However, the true aficionado will laugh wisely as the body count mounts.

The Abduction of Figaro/Dir: Peter Schickele/1998

Schickele’s comic alter ego P.D.Q. Bach has enjoyed recordings of his The Stoned Guest and A Little Nightmare Music previously, but The Abduction of Figaro is his “simply grand” masterpiece. Any opera that opens in “a town on the seacoast of Spain or Italy or somewhere” and includes the Dance of the Seven Pails is all right by me.

Television has played a lot with opera as well. The fastidious Felix Unger from The Odd Couple series was a notorious opera maven. Regular viewers of TV’s The Simpsons have been exposed to plenty of operatic put-downs. Sesame Street helped the operatic cause immensely by incorporating operatic visitors into its broadcasts, and performers such as Marilyn Horne and Samuel Ramey were happy to be silly for the sake of educating kids (not to mention the fabulous Placido Flamingo, the show’s muppet who sang for the Nestropolitan Opera!).


Here are some other highlights:

A worthy successor to the original Show of Shows, Caesar’s Hour had a great writing team and top-notch performers.

The most popular episode of the series guest-starred Phil Silvers as the scheming producer Harold Hecuba. The castaways perform a musical version of Hamlet, using tunes from Carmen and The Tales of Hoffmann (thank goodness someone brought records and a gramophone on that three-hour tour!).

Tom Lehrer was a comedy sensation from 1953 through 1960. He left entertainment to pursue a distinguished career as a mathematics professor. Aside from a few pointed songs for the political satire show This Was the Week That Was and some nifty tunes, like this one, for educational TV. 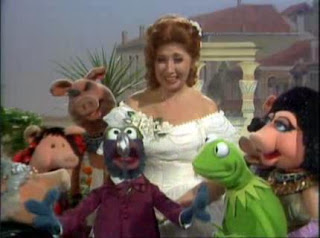 Of course, Bubbles goes up against Miss Piggy in a mash-up of Traviata, Aida, and Wagner in something called, of course, Pigoletto.

The most innovative and interesting use of opera in a non-opera context I’ve found. These five episodes, composed by Richard Thomas (Jerry Springer: The Opera) mock popular British TV shows of the time, contain very strong language and are NOT family-friendly or safe for work! However, they really leap forward in terms of marrying cinematic techniques to operatic structure . . . and are funny as hell.