The NRR Project #27: 'Let Me Call You Sweetheart' 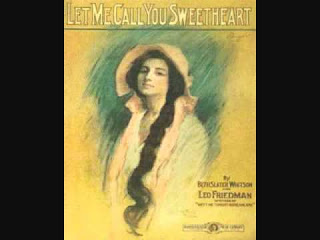 ‘Let Me Call You Sweetheart’
Columbia Quartette (The Peerless Quartet)
Recorded July 28, 1911
2:37
American popular song became a going concern around the turn of last century, thanks to music publishers. Before recordings and radio came along, everyone had to make their own music, or listen to others make it live, and for that you needed the sheet music.

The only modes of transmission were social – you heard a new song at the minstrel show, vaudeville, via church or by word of mouth. Ethnic and alternative musics stayed firmly lodged inside their isolated groups of origin. Every home had a piano, organ, and/or a guitar; a jumble of instruments and music sheets took up the front room, or sitting room, or parlor, whatever it was termed.

A song had to be memorable, relatively easy to learn, and family-friendly. America was living in the shadow of the Victorian period culturally. Opera and operetta were the accepted models of singing and composition, and the sentimental ballads popular in the post-Civil War era reflect that. From the 1890s through the end of World War I, Tin Pan Alley in lower central Manhattan cranked out songs for popular consumption – songs that dealt almost entirely with sentiment, melodrama, nostalgia, the novelties of the day, or patriotism. The tone was optimistic – genteel, cheery, and decorous. 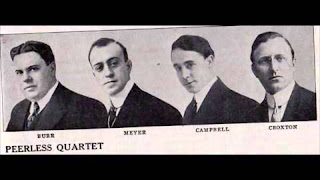 These were all songs I learned growing up. My great-grandmother’s house still held a hulking old piano, and she played, expertly licking her right fingers and flipping the pages of the score just at the last moment, as we all stood around and sang. This was also the heyday of Sing Along with Mitch on television, and we gaily chirped with the Singalong Gang as they plowed in close harmony through the hits of the pre-WWI period.

The closest existing manifestation of this music is found in the barbershop quartet tradition, and most of the songs in the genre’s unofficial canon date from this period – “Down by the Old Mill Stream,” “Shine On, Harvest Moon,” “Sweet Adeline,” “In the Good Old Summertime,” and so on.

“Barbershop” singing of course has become a hoary cliché. The nightmare image of four men approaching in straw boaters and garish vests, bellowing close-harmony vocals, is enough to put the fear of God into any person. But there is thrill to be had in singing and hearing this kind of music, an emphasis on technique and showmanship that overrules other considerations. Since its 1940s revival, barbershop has grown and diversified into men’s and women’s ensembles and choruses, and remains a wholesome niche art.

“Let Me Call You Sweetheart” is a classic sentimental waltz, but like many of the era’s hit compositions, it’s an assembly-line job. Frequently, music publishers amassed reams of verses and lyrics and farmed them out of songwriters, hoping someone would set a hit or two. Beth Slater Whitson’s lyrics were set to music by Leo Friedman without the two ever meeting.

It was recorded by the Peerless Quartet, billed here as the Columbia Quartette. This group was arguably the most popular of its time, cutting hundreds of discs in various lineups for nearly 30 years. Their most successful incarnation was led by the prolific Henry Burr, whose clear nasal tenor would become the clichéd sound of the era.

Meanwhile, the sounds and jazz and blues were in development, and would soon percolate into pop music as well. For a while, though, America's music was easygoing, familiar, and bright, and it still sparkles sometimes when a hurdy-gurdy plays or a carousel goes around.