“So many of the melodies of well-known popular songs were actually written by the Great Masters,” intones actor John Williams (best known as the “second Mr. French” on the sitcom Family Affair) in the long-running 1971 TV ad flogging a cut-rate Columbia House collection of classical excerpts, “120 Music Masterpieces.” He cited such tunes as “Our Love,” “Full Moon and Empty Arms,” and “Tonight We Love.” None of which are particularly remembered today.

What’s so bad about being popular? Nothing, nothing really. Opera is often derided for being antiquated, irrelevant, and economically inaccessible – but I notice a lot of it in car commercials. In fact, there are about a dozen arias that need time-outs right now1.

Sometimes operas inspire reworkings. Rent is La Boheme, Elton John and Tim Rice wrote a new Aida in 1998, and a substantial part of the legacy of Andrew Lloyd Webber is recycled. Smokey Robinson’s lyrics for the 1970 hit “Tears of a Clown” mine the content of “Vesti la giubba,” but the music is original. Likewise, the standard “Poor Butterfly,” composed in 1916 by Raymond Hubbell and John Golden, outlines the plot of Puccini’s Madama Butterfly, but doesn’t use its music save for a few bars in the instrumental bridge.

Few of the most familiar tunes from opera have been appropriated for modern songs. Of those few, fewer still ever cracked the charts. Here are four top pop-eratic numbers: 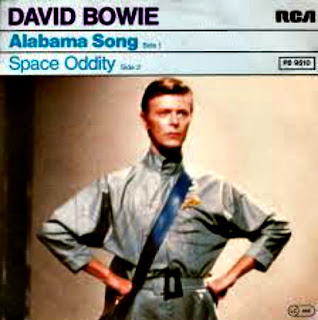 “Alabama Song,” Hauptmann/Weill, The Rise and Fall of the City of Mahagonny, 1925/1930
“(The Ballad of) Mack the Knife,” Brecht/Weill, AKA “Die Moritat von Mackie Messer,” The Threepenny Opera, 1928

The only opera songs to ever make the U.S. charts without substantial change were written by Kurt Weill, who could produce avant-garde work with one hand and pop hits (“September Song,” “Speak Low”) with the other. Elisabeth Hauptmann wrote the lyrics for “Alabama” for Bertolt Brecht, in English, in 1925; Brecht incorporated it into his Mahagonny five years later without crediting her. That the grim, sardonic lyrics appealed to post-WWII American listeners is surprising.

Both songs have accumulated lots of covers. The tragic and cynical “Alabama Song” received scorching interpretations by the Doors and David Bowie; the best version, very hard to find, is sung by Joe Frazier on the Chad Mitchell Trio’s 1964 Slightly Irreverent album. 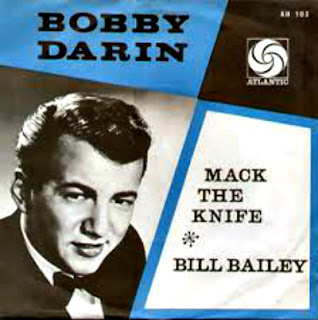 The success of “Mack the Knife” is attributable to American composer Marc Blitzstein, who translated and staged Threepenny Opera in New York in 1954, a production which ran for years in the West Village. Weill’s wife Lottie Lenya covered it with Louis Armstrong in 1956, and so did many others. Bobby Darin’s 1959 hit version is modeled closely on Armstrong’s. The song is so popular it was hijacked for commercial purposes by McDonald’s in the 1980s.

The tune (not from an opera, but by an operatic composer) is so appealing that it was covered by many artists before the King of Rock and Roll came along. 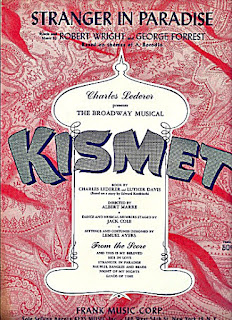 “Stranger in Paradise,” written by Robert Wright, George Forrest, 1953; AKA “The Gliding Dance of the Maidens” from the Polovtsian Dances, Prince Igor, Borodin, 1890

This song is from the hit 1953 musical Kismet, the songs of which are largely Borodin. Nonetheless, this song was a huge hit, covered most memorably by Tony Bennett – and even as a surf-rock instrumental by The Ventures, both as “The Stranger” and “Ten Seconds to Heaven.”

NEXT TIME: Al Jolson, Della Reese, Nancy Sinatra, Jackie Wilson . . . and the mystery of the Crew-Cuts

1.      FOOTNOTE: We need to give the following a rest – “Nessun dorma” from Turandot, “O mio babbino caro” from Gianni Schicchi, “La donne e mobile” from Rigoletto, “Un bel di” from Madama Butterfly, the Habanera AND the Toreador Song from Carmen, the Ride of the Valkyries from Die Valkyrie, the Anvil Chorus from Il Trovatore, “Vesti la giubba” from I pagliacci, “Voi che sapete” from Le nozze di Figaro, “Der Holle Rache” from Die Zauberflote, and the Flower Duet from Lakme. Of course, that they are easily remembered is all to the good – the goal is to be memorable, after all (if you’re scoring at home, Puccini wins with three mentions, and Verdi, Bizet, and Mozart tie for second). But we need to be strong and turn these off, go for the deep cuts.