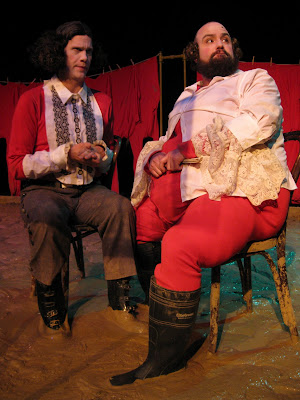 Denver’s Buntport Theater produces interesting, entertaining work. That may sound simple, but it’s an objective few artists or arts groups ever achieve.
They achieve it again with the final play of their eighth season, “The Squabble,” with an unmistakable and unstale Buntportian approach. If you want to enjoy yourself at the theater, this is the one you should be attending.
Here are more remarkable facts about Buntport. They do good work consistently. They are without pretense. They are committed to working here. They work collaboratively.
They are a little tiny Utopian island for me, really, floating in a sea of self-indulgence, bad choices and egomaniacal hobbyism. Which is why I am so biased in their favor. Caveat lector.
The creative sextet – Erik Edborg, Brian Colonna, Evan Weissman, Hannah Duggan, Erin Rollman, and SamAnTha Schmitz – have produced 26 shows together to date, by their count. They have staged unusual fare such as “Kafka on Ice,” Moby Dick Unread,” and “The Odyssey: A Walking Tour.” You could say it’s a little gimmicky – or you could say it’s no-holds-barred. The group is unafraid and unashamed to use whatever techniques help them reach the audience.
The physical setup for “The Squabble” resembles nothing so much as the ring for a messy wrestling match. It’s a rectangular box containing several cubic yards of mud. The ensemble (save for SamAnTha, who handles the offstage functions) treads through the muck, acting out an adaptation of the source material, a short story by Gogol.
The mud is an obvious metaphor for the conflict the protagonists, here named Bob Boxinoxingworth (Edborg) and Bob Luggalollinstop (Colonna), find themselves, er, mired in. It also gives the troupe plenty of dirty laundry to hang out on the clothesline framework that lines the perimeter of the action and extends up into the seats.
It reflects the identifying imagery that places the story in a jerkwater town in Imperial Russia – a “lake” that is a Main Street puddle, a town that’s proud of the evenness of its roofline, and a populace of supercilious idiots that are conscientious mainly of the freshness of their breaths.
Rising from this background like cardboard cutouts are the two Bobs, who share pedantic obsessions and spasms of covetousness, and who finally clash over Bob L.’s use of the pejorative term “goose.” Bob B pivots and fidgets himself into a frenzy, while Bob L (Colonna doesn’t take the low road in his fat suit), sways menacingly, to hilarious effect.
The fable of their feud, which ripples outward in effect until the entire village is temporarily consumed by it, is narrated by a rather well-spoken pig (Weissman) who is clever enough to both make witty observations and avoid being turned into sausage. Weissman’s turn as the identically-named but one-eyed simpleton Bob Boxinoxingworth is equally pleasing.
Rollman plays out an unrequited romance with herself. She’s both the contentious, ever-ironing Wanda Wickerstickly and the chief of police, Peter Apropopanoosh, complete with Pythonesque walk and accent, that Wanda seems to favor . . . when she’s not shrieking the overture to “Carmen” (everyone seems to have his or her classic theme, which murmurs out of their mouths add odd times). Duggan has cartoony fun with the characters of town nudnik Tony Tumblestumpington and magistrate Alfred Fredfredfredful.
Anyone who might object to wacky and surreal nature of the proceedings doesn’t know how to take a spat with a grain of salt. The former friends spurn reconciliation, and their bickering moves into the realm of actual litigation. Anyone familiar with the world of legal machinations will recognize how that kind of thing throws even the best-intentioned lust of vengeance into a flaccid torpor.
The bickering ossifies into a dimly remembered grudge. The search for legal satisfaction becomes a quasi-religious hope for deliverance. The rain keeps falling; the town rots away in the mud.
That Buntport can make us laugh so heartily while keeping the edge of melancholy keen keeps the larger perspective about childish behavior with us. Seeing “The Squabble” won’t solve the world’s problems, but it sure casts a fresh light on our roles in perpetuating them.