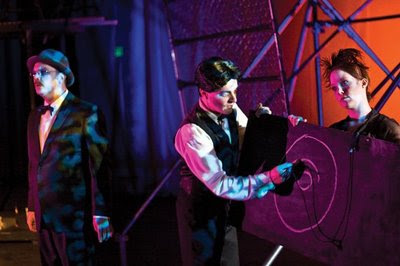 When I found out that a giant hamster wheel was somehow involved in LIDA’s latest production I went into a gimmick-happy state of elation.
In the same way, fans of avant-garde theatre will go all squiffy over this show. It’s chock-full of ominousness, shadows, nervous pauses, seemingly unrelated actions and an undercurrent of perverse sexuality. Non-connoisseurs are advised to give it a pass – unless you have exemplary open-mindedness.
Anyway, when I heard about the hamster wheel, I called my friend the Illustrated Man and urged him to come to the show with me. He’s fond of all things functionally outsize.
We drove through a spring torrent to the frumpier side of Denver’s Central Business District, where the troupe has traditionally staged its works, in the BINDERY | space next to the Mercury Café. The place is perfect for LIDA’s purposes – it’s an empty warehouse, basically, open and resonant. It’s housed most of the 14-year-old company’s productions.
Brian Freeland is the Prime Mover of LIDA, and here serves as the production’s director, producer, and sound and scenic designer. Local playwright Martin McGovern concocted the script, which intersects the psyche of writer Franz Kafka with that of one of his best-known creations, the hapless protagonist Joseph K of the novel “The Trial.”
The play is given in the Expressionist manner – a highly stylized, grotesque approach popularized in early-20th century Germany that intends to stir emotion and non-logical associations in the witnesses’ minds. (For reference, see Robert Wiene’s classic 1920 horror masterpiece, “The Cabinet of Dr. Caligari.”)
This plan of attack served LIDA well with its 2001 production of Thornton Wilder’s “Our Town,” when it pushed the all-too-familiar naturalistic text out of its, and the audience’s, comfort zone. In the case of “joseph k,” the material is already so esoteric that the production draws a veil over a veil.
A studious theatergoer will know, for instance that while Joseph K (played here by Dan O’Neill) goes through his mysterious encounters and torments at the hands of an enigmatic bureaucracy that has charged him with he knows not what, he is literally overseen and shepherded by Kafka himself (Josh Hartwell).
Kafka’s not doing at all well himself. He is depressed, socially phobic and can’t resolve his relationship with his on-again off-again fiancée Felice (a little homework helps clarify this after the show).
Kafka and Joseph exchange places, and sometimes walk together, in the aforementioned giant hamster wheel, which dominates the performance space – a bare floor that faces a bank of seats. The connotation of ancient prison treadmills, and current exercise ones, is obvious.
The great hollow room is backed by a white cyclorama that covers the rear and is used to front-project performers’ silhouettes, as needed. Stage fog is periodically injected into the scene; illumination comes from largely exposed banks of lights. (Steven J. Deidel and Anna R. Kaltenbach are credited with the “Light/Dark Design.”)
In this environment the whiteface performers gibber, gesticulate and scamper at and around Joseph K, alternately browbeating, threatening, acting mysterious, feeling each other up and diagramming. The performers in the ensemble include Brandon Kruhm, Doron Burks, Lorenzo Sariñana, Petra Ulrych, Elgin Kelley, Julie Rada, Ken Witt, Mike Marlow and Elizabeth Parks.
The Illustrated Man sat patiently through it all. Did it do anything for him, or me? Was it hopelessly self-indulgent? He thought it was interesting, but it didn't really seem to do much for him. I felt the same way.
Is that an endorsement? A condemnation? You’re going to have to figure that out for yourself, most conclusively by going to see it. I’m not writing this for a given customer base or demographic. I’m not advising you how to spend your entertainment dollar. I’m here to tell you what I witnessed and what I think about it – the rest is up to you. I believe you should ALWAYS give something strange a try.
LIDA is legendarily tough-minded: I’ve never seen it yield anything for the sake of clarity. I don’t feel that it’s here to educate us, or entertain us, or reflect any consensual reality. It does what it does and it is what it is – mighty powerful or powerfully frustrating, depending on what you think theatre should be.
LIDA’s home page calls the show an “exploration of power, politics and paranoia.” It certainly evokes the nightmare mood of hopelessness that Kafka is primarily identified with. Whether it really reaches you will depend on what you bring to it.

As a member of this ensemble, I'd just like to say that this is one of the best theatrical reviews I've ever read. Not for praise of a show, but for honest thought and attention to detail. Thank you to the author.

Wow! Thanks so much. Now that I can write at a length and depth appropriate to my sense of commitment and responsibility to live theater, your comment is treasured!