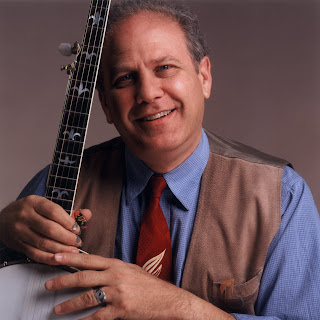 (A profile from 2003. UPDATE: Pete and his band Flexigrass have a new release titled "What The," and he can also be heard on Steve Martin's new album "The Crow: New Songs for the Five-String Banjo." For more information, please visit www.drbanjo.com.)

Pete Wernick tromps across a field in the baking afternoon heat, trying to get a better connection on his cell phone. Considering his busy schedule, and his status as one of the world’s outstanding acoustic instrumentalists, he’s a heck of a friendly and accommodating guy.
The banjo master, singer, composer, band leader and educator took time out from his duties at the RockyGrass Academy, a week-long acoustic music seminar that precedes the annual RockyGrass Festival, to speak about his past, present and future. Though best known in the bluegrass world for his work with Tim O’Brien, Nick Forster, and the late Charles Sawtelle in the seminal progressive bluegrass group Hot Rize, the 57-year-old Wernick was and is one of the key innovators in the genre’s history -- from his early days with Country Cooking in the 1970s, through his 16-year term as president of the International Bluegrass Music Association (IBMA), to his current helming of the jazz/bluegrass hybrid Live Five band.
Speaking with a rapid-fire intelligence that’s a mirror of his playing style, Wernick touched on a constellation of subjects, beginning with his affection for the annual Lyons hoedown -- “It’s my favorite,” he says. “There’s goodness in all of it. I’m immersed in the bluegrass community, and there’s certainly a good one here in Colorado.”

A native of the Bronx, Wernick got turned on to acoustic music via the urban folk boom of the ‘50s and ‘60s.
“My friends ... around 1960, when I was 13 or 14, were already learning guitar and banjo, and they were sort of following in the Pete Seeger tradition,” he says, citing the popularity of such groups as the Kingston Trio as well. Without the availability of instruction manuals or tablatures in that period, Wernick picked up his skills the hard way.
“Everybody ... learned to play by listening and doing a lot of experimenting, and that’s how I learned how to play... Slowly but surely I caught on to what was necessary -- but before I even started to play, I had heard Earl Scruggs on a record and he seemed like the ultimate, (most) incredible musician I’d ever heard in my life, and I just loved what he did,” says the musician.
He continued to play for pleasure through his college years at Columbia University and at Cornell, where his studies resulted in his earning a doctorate in sociology (thus his eventual “Dr. Banjo” title). He hosted a bluegrass radio show at Columbia, which deepened his knowledge of the music, spurred his contact with other enthusiasts and musicians, and whetted his appetite to be a participant in the scene himself.
“For a guy with a doctorate from an Ivy League university to quit his job and say, ‘No I’d rather actually be playing bluegrass,’ which is what I did, that’s a statement in my life,” he says.
He recalls faithfully attending four-hour jam sessions he attended on Sunday afternoons in Manhattan’s Washington Square Park, where he met David “Dawg” Grisman, Jody Stecher, and one to two dozen others in the New York metropolitan area -- “one in a million,” as he puts it -- who shared his love for the music.
Eventually, he and others began attending bluegrass gatherings and competitions in the South, carpooling down to Virginia and North Carolina and, surprisingly to them, coming away with prizes. He also gained insight from contact with the place and the people that spawned the music. Although bluegrass is now truly an international phenomenon (the IBMA now boasts members in 30 countries around the world), he sees it as a gift from Southern Appalachian culture.
“That’s when I really got acquainted more with the culture that bluegrass comes from. ‘Cause you learn one set of thing on a record, but some stuff you don’t learn until you go into a cafe/ down there or you’re in the parking lot of a festival just hanging out with Southern people and getting to know life from their perspective,” he says.

Fast-forward to today, as Wernick talks about his recent resurrection of Hot Rize with O’Brien and Forster, and the addition of young guitar virtuoso and Nashville session player Bryan Sutton, who takes over the duties, but respectfully never seeks to take the place, of Charles Sawtelle, who passed away in 1999 after a long battle with leukemia.
“It’s about as big of a treat as I could ask for,” he says, relishing the opportunity to perform the tunes he and his compatriots crafted over the course of a quarter-century. He estimates that Hot Rize performed over 1,500 shows during their career together until Sawtelle’s death put an end to their original configuration.
“When we lost Charles, it really popped a big bubble in all of our heads,” says Wernick. “Not just losing a very dear friend, but maybe losing the sound of a band that was a very big part of our lives.” After a period of mourning (“when your spouse dies, you don’t remarry two months later,” he says), the surviving members decided to have a go of it again, especially after a long-delayed, Sawtelle-dedicated live album taped in 1996, “So Long of a Journey,” saw release last year.
The band accepted six gigs without knowing who their guitar player would be, then aimed high and decided to ask Sutton, who happily agreed. “He’s a delight to be around and play with,” says Wernick, and the successful recombination of talents meant that seven Hot Rize concerts were scheduled for this year as well.

After the end of Hot Rize’s primary phase of activity in 1992, Wernick continued the innovations he had begun decades before. Always enamored of jazz and particularly the sound of clarinetist Benny Goodman, Wernick put together an ensemble that would fuse genres. The result, dubbed “flexigrass”, features Wernick and George Weber on vibraphone, Bill Pontarelli’s clarinet, the drum work of Kris Ditson, bassist Roger Johns, and featured vocalist Joan Wernick. The group has produced two albums to date, both of which combine jazz and bluegrass influences.
Pete was ready for a change. “Honestly, when you get into your 50s and you’ve been part of a phenomenal bluegrass band for about half your life, which in my case is Hot Rize ... it’s nice to do something after you’ve been doing the same thing for a while and mix it into the mix,” he says, although he admits meeting resistance from purist bluegrass aficionados.
“Some bluegrass hardcore people really think I’m out of my mind,” he jokes, “and it’s like I got infected by some weird disease, (like) I won’t be the same Pete anymore. I’m just the same Pete, just growing in different directions. And I have and will continue to play hardcore bluegrass on one day and the very next day I might have a Live Five gig.”

Wernick straddles the historical line between the originators of bluegrass and the current third, and even fourth, generations of practitioners, many of whom have been emboldened to widen the genre’s stylistic and subject boundaries by the innovations he and his contemporaries first implemented decades ago. Even today, it seems that a schism between traditional and progressive bluegrass musicians and fans persists; one that Wernick expresses a unique and unifying perspective on.
“My whole career is based on showing that I truly appreciate and understand the bluegrass sound as well as I can,” he says, “and then saying, ‘Well, I’m not here to just reproduce the tradition from another era, I’m here to be myself as a living, breathing musician -- and I’m going to use the same palette of colors that hey have used, but I’m going to add a few.’“
He continues, “The hardcore bluegrass is very sensitive to being disrespected. Bluegrass has spent most of its life as a music being ignored and even mocked. You know, people say, ‘Oh you play bluegrass -- yee-hah!’ you know, and you get this real condescending thing going. To me it would be comparable to ... a Catholic listening to someone mock Mother Teresa ... and I’m thinking, ‘You don’t get it, and go away, you know, you don’t get it -- just leave!’
“And I really like the bluegrass people more than the academic people.... It’s a delight, because the people who love this kind of music are definitely more, I think, in touch with earth-centered values, you might say, than a lot of the people who are into the tight-pants-loud-electric-guitars-and-screaming kind of music that really doesn’t reference anything about the beauty of music, it’s all a vehicle for being angry or something. I don’t have much use for that, I like hearing music that sounds good and that means something.”
Now matter how much some fans might look askance at his musical explorations, Wernick is confident that he is on the right track. His abiding passion for the music sustains him, as it did the Father of Bluegrass, Bill Monroe, of whom he shares a relevant memory.
“I have a very deep appreciation for the roots and the main stream of bluegrass... I got to see Bill Monroe stay up all night playing music ... he was actually dancing with some of the women at the party as the sun came up, and, believe me, I’ll never forget that, I haven’t yet ... that’s a lot more than learning licks out of a book. It’s a lot deeper message.”
at May 18, 2009