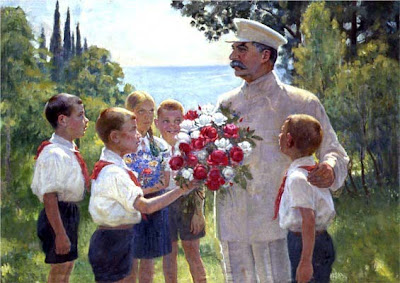 (An expanded version of a Dscriber.com post from last week:)

At least until tomorrow, Josef Stalin will stare down at the inhabitants of a Russian city.
According to the Interfax News Agency via the latest update from the Moscow Times, 10 large billboards featuring the image of the former Soviet dictator will soon be removed on orders from the City Hall in Voronezh. The municipality of nearly a million residents is located about 900 miles south of the Russian capital.
The billboards were commissioned and paid for by “the Voronezh-based division of the Communist Party of the Russian Federation (CPRF),” according to Internet newspaper PRAVDA On-Line (pravda.ru). The signs celebrate the 130th anniversary of his birth in December; Stalin is shown in parade uniform with the slogan “Victory is ours” beneath him.
According to a report from Reuters, “Sergei Rudakov, a senior CPRF party official in the town of Voronezh . . . (stated), ‘Everybody knows that under Stalin our country achieved the highest rate of economic growth and development in other spheres, and the great victory (over Nazi Germany).’”
Dmitry Solyvov, reporting for Reuters, imputes that the CPRF, which openly celebrates the 31-year term of Stalin as the Soviet Union’s General Secretary, is touting his stern social control and “command economy” approach as a method of overcoming current economic ills.
According to Interfax, the Voronzeh city fathers ruled that the billboards were illegal as they did not “advertise anything nor offer goods or services.”
Nostalgia for Stalin’s rule has grown over the past decade in the former Soviet Union. A nationwide television poll held in December of last year named him the third greatest person in Russian history, missing the top spot by only 5,500 votes.
The Communist leader, who died in 1953, is held responsible by historians for the deaths of an estimated 4 to 20 million people – due to the executions of political and criminal offenders, the deaths of prisoners in Gulags, Soviet prison camps; deaths due to forced resettlements, the elimination of rivals and perceived enemies of the state, the forced relocation of ethnic minorities, and Soviet agricultural policies that caused the Ukrainian “Holodomor,” the 1932-1933 famine that killed between 2.5 and 10 million people.
The CPRF is the second-largest political party in Russia, and is the only opposition party recognized by United Russia, the dominant political entity led by Prime Minister and former President Boris Yeltsin.
Ironically, Putin himself, a former state security officer, has been accused by critics of creating a security state modeled after Stalin’s. U.S. economist Richard W. Rahn has characterized current Russian government as “a . . . nationalistic authoritarian form of government that pretends to be a free market democracy.”
The Web site russiansentry.com commented: “The trend to re-create the Soviet past is a very healthy indicator for Russian society. . . While a few things need to be adjusted, Soviet society was a worthwhile and ideal society. It did well despite the monumental efforts that were made both internally and externally to sabotage the model. So what's the surprise about the billboards? Perhaps linking the image with Stalin has its flaws, but the image is identified with strength and success, rather than his mistakes or excesses. Victory is ours!”
at June 30, 2009