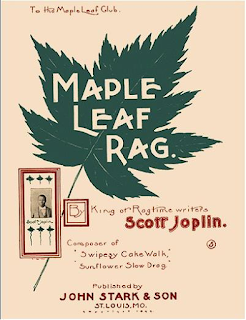 Ragtime piano rolls
Scott Joplin
1916
Seven recordings
One of the most cumbersome, expensive, and unique playback systems invented was the player piano. The idea of a full-sized instrument that could reproduce the playing of a human was in the air for decades, but remained unperfected until 1895. After that, it became enormously popular for a time, creating an industry that would last until the advent of electrical audio recordings in the mid-1920s improved sound playback on disc enormously, at a far more cost-effective rate.

The player piano works pneumatically; that is, through compressed air. Holes poked in a roll of paper correspond to notes played on the piano. When a hole is “read” by the mechanism, it shoots a burst of compressed air at the lever action that forces the proper key to be struck. Sounds complicated? It only took about 20 years to iron out the problems inherent in the technology.

Once the technical aspects were figured out, the player piano became a familiar part of the culture of the period. Whether buying new rolls for the home machine, or plunking nickels into machines set up in bars and restaurants, customers spent freely on the device. Commercial customers found that, after the initial capital outlay for the machine, the cost of buying new rolls and maintaining the player were cheaper than hiring live performers – no doubt causing a wave of technology-related unemployment.

The novelty of the player piano, with its magically moving keys pressed as though by invisible fingers, was a draw, as was its consistency. (Some prominent players who grew during this 30-year span, 1895-1925, describe learning how to play by slowing down the mechanism’s action and aping the keystrokes, just as English blues players of the 1960s learned by slowing down American records and working out the chord changes.)

A short list of noted performers who “cut” piano-transcriptions includes Rachmaninoff, Gershwin, Percy Granger, Fats Waller, Jelly Roll Morton, and James P. Johnson. These invaluable records teach us much about the players’ techniques. One of the most prominent names to record piano rolls was, of course, the greatest ragtime music composer, Scott Joplin. 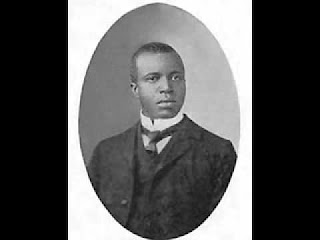 Joplin was an African-American Texan, born in the wake of the Civil War. He quickly mastered the parameters of the ragtime song (see my earlier entry on ragtime here), and by 1899 had his first hit, the familiar “Maple Leaf Rag.” Joplin gave the wild, upbeat, syncopated genre dignity by introducing complex chording and the symmetries of classical compositions. Joplin was not shooting sorely for popularity; he was a serious composer who produced more lyrical pieces such as the sublime “Solitude” and the opera Treemonisha, which went unproduced until 1975.

Joplin’s day in the sun was short-lived. He faced the typical bias against African-Americans at the time; it was fine for them to serve as entertainers and figures of fun, but white society did not accept their expressions of higher aspirations. Joplin was famous, but solely because of his rags. Joplin probably consented to record these seven rolls he did in 1916 just to make some quick cash.

Joplin’s name on these rolls was a draw for the public. Unfortunately, only one of the seven piano rolls, his second take on “Maple Leaf Rag,” seems to reflect his genuine playing, a stuttering, uncoordinated effort that speaks to his advanced stage of suffering from tertiary syphilis. The other six were edited and “corrected” by the staff arranger at the recording company, William Axtmann. Joplin would die the following year from his condition, at the age of 49.

The Joplin revival began in 1971, when Joshua Rifkin recorded a selection of his work, which received a Grammy nomination. Prominent musicologist Gunther Schuller orchestrated and produced Joplin’s Red Back Book for a 12-piece ensemble in 1973, and won a Grammy doing it. Then, of course, Marvin Hamlisch’s use of Joplin in his soundtrack for the film The Sting the same year opened the floodgates for Joplin’s rediscovery.

The player piano remained significant for only one other American composer – the amazing and still under-regarded Conlon Nancarrow (1912-1997). An expatriate in Mexico due to his left-wing leanings, Nancarrow was fascinated by the possibilities the player piano gave an ambitious composer. Eventually, he purchased the equipment needed to make rolls himself, and did so from 1947 on.

Nancarrow recognized that the player piano could reproduce compositions impossible for one or even two keyboardists to perform. He could pile line after melodic line on top of each other, as well as multiple independent rhythms. The results, fortunately preserved, are exciting explosions of color, harmonics, and sound patterns.