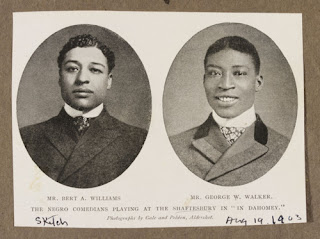 Victor recordings
Bert Williams and George Walker
Oct.-Nov. 1901; 1906
11 of 14 extant
The most masterful overview of the remarkable lives and careers of Bert Wheeler and George Walker can be found here, in a masterful,meticulous, and entertaining three-part examination by Jas Obrecht. For those unwilling to read his great non-fiction, here’s a summary.

The cakewalk was discussed by me previously here; and in thisentry from my National Film Project, I recently touched on the contributions Williams made. The important thing to remember is that these were the first African-American superstars. Their 1903 musical comedy “In Dahomey” was a hit, running for two years, and the first written and performed by African-Americans on Broadway.

Walker and Williams’ relations with the culture are complicated. On one hand, one of their gigs starting off was playing African villagers in animal skins; they were routinely rousted, robbed, and abused by white gangs as they traveled in vaudeville. Williams wore blackface, and both men housed their onstage personas in the racist stereotypes of the day – Williams as Jim Crow, the simpleton/stooge, and Wheeler as Zip Coon, the straight/con man who takes advantage of him.

Their immense popularity eventually gave them the power to move the needle a little bit. They had income and leverage, and they tried different media platforms. Ten of the 11 recordings they made were set down in 1901; four of them are from their hit Broadway show “Sons of Ham” the previous year. (“Pretty Desdamone” was a one-off in April of 1906; Walker didn’t like how his voice recorded and refused to do more.)

Some of the surviving selections are the typical ethnic “coon” or “darkie” songs of the day, sentimental tripe that paints the average African-American as a shambling comic figure. However, little gems such as the comic “(When It’s) All Going Out and Nothing Coming In” and the fanciful “In My Castle on the Nile” are charming and catchy. Despite Walker’s trepidations, his voice comes through cleanly n these recordings. However, Williams has an edge on him; he is much better able to project his persona and attitude through the medium. No wonder Walker took a pass. You can feel the energy and interplay on these discs, and get a sense of how appealing these two performers were.

In 1909, Walker began to suffer from the symptoms of syphilis. Two years later, he was dead, at the age of 38 or 39. Williams went on to even greater fame as a solo act, with song hits such as “Nobody” and “When the Moon Shines on the Moonshine.” He died young himself, at 47, in 1922.

The achievements of Walker and Williams are impressive. Practically forgotten today, they were the first African-American superstars.