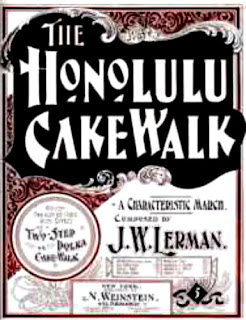 “Honolulu Cake Walk” is a prime example of the conscious and not-so-conscious cross-pollinating cultural traditions of black and white in the America of the day.

The clear, ringing tones of the banjo were perfect for acoustic recordings, and banjoist Sylvester Louis “Vess” Ossman, “the King of the Banjo,” was one of the most popular recorded musicians of the day. He toured the United States and England, performing for both president and king. Over a 30-year career, he tracked an immense number of tunes, working as a soloist, accompanist, and a member of acoustic trios (his Ossman-Dudley Trio’s biggest hit was “St. Louis Tickle”). He adroitly performed his own transcriptions as well, as most ragtime was written for solo piano.

This particular recording, again, is not easily available. Interested listeners will have to, as I did, listen to what they can of Ossman’s recordings, and cross-reference them with more contemporary recordings of “Cake Walk.” Ossman’s style is crisp and articulate; he employs the classical plucking style, which emphasizes his rhythmic precision. It’s bright, ringing, confident music, infused with the cocky spirit of ragtime.

Ragtime emerged in 1896, when black entertainer Ernest Hogan penned sheet music in the style that had been floating around the black vernacular music scene for a while. Finally somebody had put some swing into American song. After over a century of aping European music, here was something homemade with a new dynamic. That rough naïve energy peculiar to America emerged with a sound that made the hips shake. The phenomenon leaped the color barrier, and soon white artists like Ossman and his primary rival, Fred Van Eps, were playing it too.

Ragtime, of course, propelled dancing, as did most social music of the time. The cake walk originated in competitive dances held on slave plantations. Slaves competed via dancing and strutting to win a large cake, thus the name. This was picked up, again, by white culture, and transmitted through cakewalks performed at minstrel shows.

What white people of the time probably didn’t get was that they were being mocked. Many times, the slaves would dress in cast-off finery, and in the cakewalk they would parody the stiff, inexpressive carriage and manners of their Caucasian masters. It amused the white folks, but they were the butt of the joke. Finally, the cakewalk moved offstage and became part of the repertoire of dances of the day, along with waltzes, polkas, quadrilles, and two-steps.

The racist associations with the cakewalk and with ragtime music remained strong – Ossman recorded tunes such as “A Coon Band Contest,” “Jolly Darkies,” and “Ethiopian Mardi Gras.” “Honolulu Cake Walk” is another title designed to captivate the potential sheet-music buyer with a whiff of the exotic, that romanticizing of the Other that’s so embedded in white culture of the day.

So, why pick “Honolulu Cake Walk” when other Ossman recordings, hits such as his “Yankee Doodle,” “Cocoanut Dance,” and “A Hot time on the Levee” were more popular and easier to hear? Don’t know. But – the first baby step toward the funky happens here.