‘The Comedians’ a definitive overview 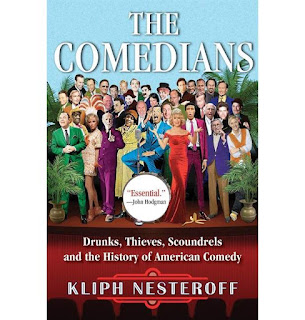 Did you ever think, “I’m going to write a book about ________.” You go to the bookstore or to the library the next day, and there it is. Somebody else wrote it while you were out screwing around. Dammit.

“The Comedians” is an incredibly strong work, highly readable, and immensely informative. This is a perfect general-interest overview of the history of American comedy – standup and its offshoots – from the turn of last century to 2011. Kliph Nesteroff somehow compresses this elephantine subject into a compelling 300-some pages without losing either focus on significant detail or a global perspective of the evolution of the style, substance, and business of comedy, along with its permutations through all the mediums we’ve leapt through over the last century.

The author dives right in, describing the late-19th-century American construction of the theatrical “circuits” or chains that would offer performers contracts. The expansion of the continental railroad system meant that it was now cost-effective (if not incredibly uncomfortable and maddening) to tour the country with an act, and hope to climb the ladder of vaudeville respectability to play the Palace in New York City, the heart of the entertainment industry at the time.

In addition to citing such big early names as Eddie Cantor, Jack Benny, W.C. Fields, and the Marx Brothers, Nesteroff digs deep into the files and points out significant figures often overlooked – Frank Fay, Ted Healy, Rusty Warren, Ray Bourbon, Jean Carroll, and tons of others. He takes us through vaudeville’s decline, and the successive ascensions of radio, film, television, and digital humor. He illustrates the importance of nightclubs, strip joints, Las Vegas, and the gaping maw of cable TV in the evolution of the art form.

Did I say art form? Yes. Talking about your penis in a spotlight for money doesn’t sound like a skill, but it is. Nesteroff is, like me, a former standup, and it expertly informs his work. He knows what it’s like to stand in the back of the room until 1:30 a.m. to do your five minutes. For free. Six nights a week. He’s seen the depressing interiors of green rooms and comedy condos, where the talent is kept corralled, live livestock with attitudes and bad haircuts. His adept analysis is energized by his lean, clear prose. Another great lesson from standup – have something to say, say it, and move on. This lesson Nesteroff mastered long ago. There is a component of entertainment, of showing some leg, as it were, in writing for money that is mostly absent from academic writing.

Here’s a few glimpses of what the writer captures: W.C. Fields saying of his career, “I would never have gone through with it if I had known what it was going to be like . . . mental torture is too high a price to pay for anything”; Fred Allen, saying of a proposed statue to Milton Berle, “It will be the first time people  shit on a statue”; to Lenny Bruce performing naked; to Richard Pryor asking a Vegas crowd, “What the fuck am I doing here?” and walking, then changing comedy forever.

Best of all, Nesteroff constructs a chain of linkages between the comedy generations. For the first time in print that I know of, you can trace the influences (and, OK, outright thievery) of comedy approaches and structures that provide a kind of Hegelian progression, a passing of the torch, albeit between disturbed, transgressive, misanthropic misfits. For the first time, Nesteroff exposes a continuity. Comedy has a plot, and its performers high and low, big- and small-time, have molded it.

Anyone who likes to laugh will enjoy this look backstage .Any past or present member of the siblinghood of yockmeisters will recognize that nothing much has changed over the century. Anyone contemplating going on stage and telling jokes should read it first.
at June 09, 2016