'Do Not Sell at Any Price': A masterful exploration of an arcane musical world 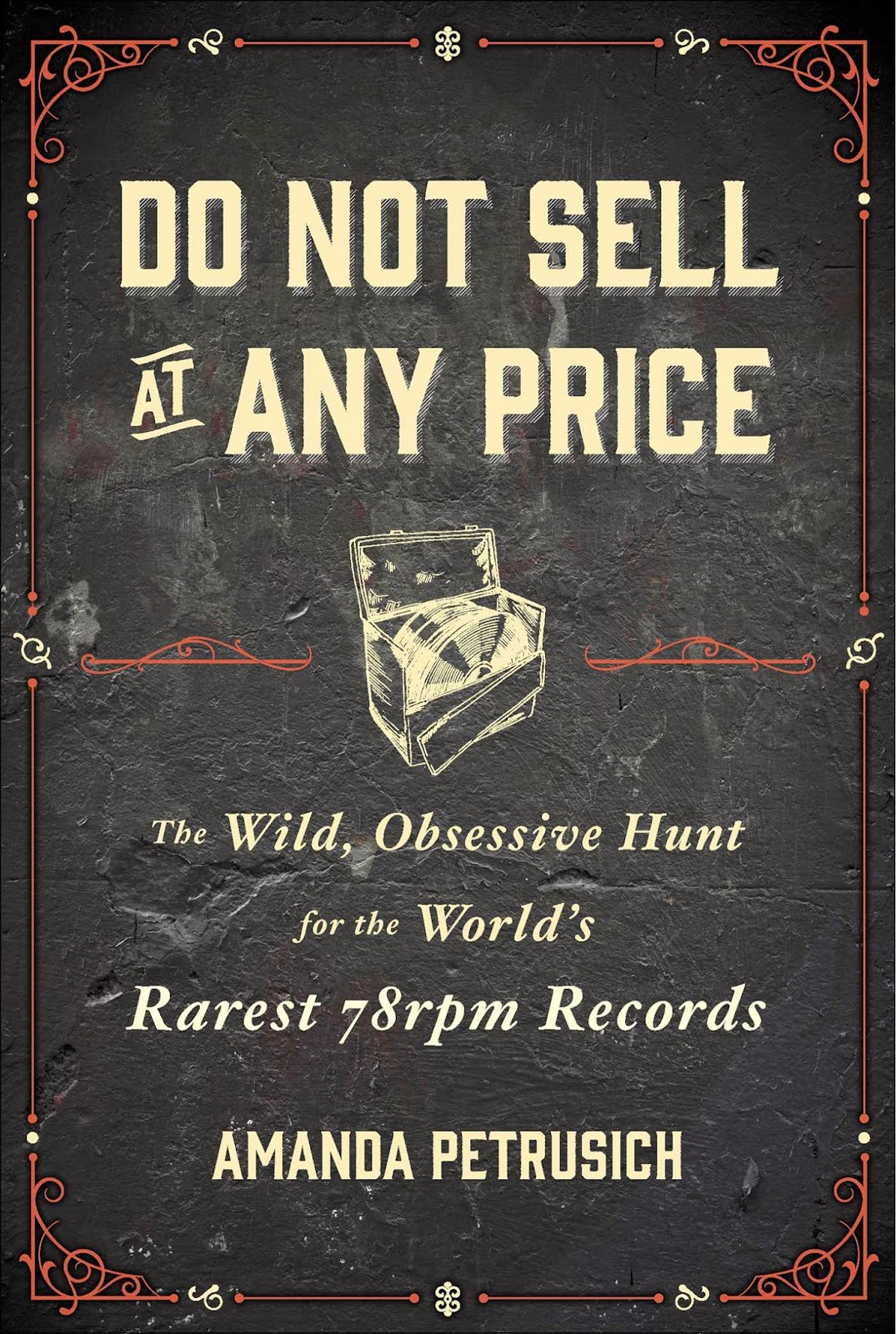 Do Not Sell at Any Price: The Wild, Obsessive Hunt for the World’s Rarest 78 rpm Records
Amanda Petrusich
2014
Scribner
New York

Balance is the key here, in the best non-fiction I’ve read this year.

“Do Not Sell at Any Price” is an exemplary work that demonstrates that a non-fiction narrative can be just as compelling as any fictional one. By virtue of solid research and investigation, coupled with good writing, author Amanda Petrusich creates, rather than glib feature writing, authentic insights into far more than the specific topic at hand.

“Do Not Sell” delves into the cloistered and idiosyncratic world of music collectors – seekers of vintage music on 78 rpm records. Between 1925 and 1948, these brittle shellac discs were the way music was recorded, vended, and preserved, produced by a profusion of companies large and small. In those days of cultural and communication isolation, vast amounts of marginal, eccentric, and original performers were captured. The savants that collect these sonic rarities are obsessed figures, some possessed with a quasi-messianic sense of mission to rescue these lost voices from oblivion.

Petrusich brings the scene to life with an impeccably balanced approach equal parts research, interviews, profiles, and critical analysis, ensconced in a first-person framework as she goes along on the quest with some of her subjects, sometimes hilariously. She goes so far as to learn how to scuba-dive so that she can search the muddy bottom of the Milwaukee River for some of the fabled lost Paramount recordings. (Save the receipts; I believe those lessons ae tax-deductible.)

Most important of all, Petrusich is wise to herself. She states early on, “I wanted collectors to reveal their desires and methodologies so I could dissect their work and devise grand statements about our cultural moment. In response, collectors sneered, chortled, or told me to fuck off.” From the get-go, Petrusich simultaneously acknowledges and lets go of her preconceptions – then gets on the ground and saturates herself in the details.

Petrusich’s voice is here, but it’s not cloying or cute, pompous or sententious. As one should, she asks good questions, listens well, and pulls her conclusions from the evidence and her experience. She brings to life the characters that inhabit this alternate universe and gives them space to express themselves – and they are quite eloquent.

Remember, these fanatics aren’t academics but hobbyists – living outside the mainstream of cultural dialogue, creating their own canons and alternative histories, sometimes sharing their thoughts with others, sometimes remaining clapt in near-complete isolation, inhabiting what seems to be a self-constructed dream world, addicted to control over their basement-level kingdoms. “. . . collecting had clearly become . . . a functional way of rebelling against mainstream culture. . . . rejecting a society that felt homogenized and unforgiving,” Petrusich writes.

Says collector Ian Nagoski of his ilk, “’ ‘Zwigoff and Crumb and innumerable others, these guys are definitely discontents in a Freud’s Civilization and Its Discontents kind of way. They’re looking at the world and seeing it as untenable. The world is sick. And yet here is this thing that affirms that there’s something about it that’s beautiful. But it’s forgotten, or lost, or separate from day-to-day reality. But if you could just put it back together, then you could reconstruct this gone world, this kind of life that was once worth living, and make that into your own life, and then it would be okay or tolerable for you.’”

One of the most interesting considerations Petrusich brings out is the concept that the historical narrative is always in flux, subjective, squishy – determined by accidents, destruction, bias, prejudice, and the sheer inability to deal. Cultural worth fluctuates like stock prices. The vital expression of the culture lies first here, and then there, and over there where you never expected it to manifest (that my childhood comic-book heroes are now seen as the foundation of a world-beloved secular mythology seems to me ridiculous and awesome, simultaneously).

She quotes another collector, Nathan Salsburg, “’Another danger of the canon being having been engineered – accidentally or on purpose – by collectors is that scads of things were excluded, either because they didn’t conform to a collector’s taste of because there just wasn’t enough time or space for anyone to properly process them.’”

The paradigm of the curator-as-impositioner-of-significance-meaning-and-context is, of course, Harry Everett Smith, the legendary compiler of The Anthology of American Folk Music, quite accurately described by Greil Marcus as “an occult document disguised as an academic treatise on stylistic shifts within an archaic musicology.” This 1952 creation helped spark the folk revival and blues renaissance, both of which folded into rock – and still surfaces in genres as diverse as grunge and Americana. Smith’s achievement was to select and assemble an intuitive masterpiece – a narrative of outcast voices summoning raw feeling and captivating sounds. Since then, supplemental and alternative compilations have emerged. Companies such as Revenant, Dust-to-Disc, and Yazoo and individual efforts such as Work Hard, Play Hard, Pray Hard: Good Time, and End Time Music and People Take Warning! Murder Ballads & Disaster Songs make the case that there is much material to be processed yet.

Petrusich is not an ironic observer. She can hear what the enthusiasts share with her, describing the raw, unmediated sound of the turn of last century, before media surrounded us. “And I understood, for a moment, what collectors meant when they moaned about what was lacking in contemporary music: that pure communion, that unself-consciousness, that sense that art could still save us, absolve us of our sins. We know better than to expect that now.”

There is something to be said about the parallel I pick up here between collecting and the act of creating itself – another lonely occupation populated by shall-we-say-unique-types who dredge for signs of significance, and reveal their insights . . . or don’t. The nature of obsession drives most creative types inward, and the shelter of eccentricity often protects the fragile. What is an artist but one who, unsatisfied with things as they are, crafts their own worlds? What do you call someone who discovers a new set of meanings – a visionary or a nutjob?

But I digress. “Do Not Sell” does more – it makes the reader come to terms with his or her own acquisitive tendencies (confession: I have stacks of 78s, and 45s, and LPs, and cassettes . . . it was difficult for me to throw out my 8-track tapes). Most importantly, it inspires us to seek out the sounds that are the basis of all this fuss. Few of us have the wherewithal to match Petrusich’s subjects, but the digital revolution means that nearly all the musics of the world can be enjoyed, absorbed, passed on. This book ties it all together.
at December 12, 2014