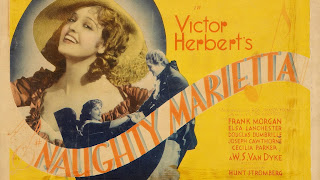 Though its music remains famous only as a punch line, the operetta Naughty Marietta was the biggest hit of Victor Herman’s career. We discussed “Gypsy Love Song” from his1898 show The Fortune Teller,centering on an assessment of operetta’s place in American culture, previouslyhere.

Victor Herbert was the perfect person to transmit the spirit of operetta, as he was a Viennese immigrant with prolific talent and ambition. An operetta is understood as being a short opera, sung in the language of the audience, light or humorous in inclination, using spoken dialogue. (Did you know that Bizet’s Carmen is that rarity, a tragic operetta? Its popularity bumped it up to operatic status, and prompted some to change its spoken dialogue to sung recitatif.) Though developed primarily by France’s Jacques Offenbach in the 1850s, operetta was perfected in Vienna, springing from the pens of composers such as Johann Strauss II (Die Fledermaus), von Suppe, Kalman, and Lehar. Herbert was steeped in the form.

Herbert sailed over to America to assume the post of principal cellist for the Metropolitan Opera orchestra. (His wife Therese Forster was the Met’s first Aida.) He soon climbed into a series of conductorships, and composed frantically. During all this, he made time to found the rights group ASCAP, the American Society of Composers, Authors, and Publishers.

What was racy and satirical in Offenbach’s hands became wholesome and sentimental in the hands of the Viennese. Operetta became the rage of the bourgeoisie, and in America, Herbert was its muse. Operetta companies, founded on revivals of Gilbert and Sullivan and foreign hits, yearned for an influx of original material. Between 1894 and 1920, Herbert wrote 43 operettas. Though he longed for a more respectable reputation, he only composed two operas, neither a success.

Naughty Marietta is set in 1780 New Orleans, and involves a French countess disguised as an Italian girl disguised as an Italian boy, pirates, and such like. The “Dream Melody Intermezzo” highlighted here covers a scene change in Act II of the show. It reprises the show’s signature song, “Ah, Sweet Mystery of Life,” after an exquisite violin cadenza. The specific recording here is vastly clearer and more “true” than earlier recordings — a sign that recording was incrementally but inexorably improving its fidelity.

In the grip of Mel Brooks, “Ah, Sweet Mystery of Life” became one of the funniest laugh lines of all time. His Young Frankenstein (1974) used the melody as a metaphor for the sexual ecstasy the Monster gives to Dr. Frankenstein’s fiancée. Woody Allen used the show, too, in his 1971 Bananas, in which the cast album is used to torture political prisoners.

At any rate, the next time you hear the song, you might be able to cast your mind back to a time when it was a serious and stirring experience.