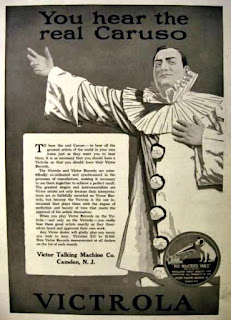 ‘Vesti la giubba’ aria from Leoncavallo’s “Pagliacci”
Enrico Caruso
Recorded March 17, 1907
3:36
‘Caruso’ is a bit of an eponym, and that requires effort, good or bad. To call someone a Caruso, or an Einstein, or a Brando, ironically or not, is to refer to someone as an exemplar of a quality. Enrico Caruso, for better or worse, is the Western-art-culture epitome of the fancy “singer” – a human songbird, warm-hearted, outgoing, flamboyant, and dynamic; Italian, therefore somewhat exotic to many, loving fine dress and good food and beautiful women, belting into the analog recording horn more than 260 times between 1902 and 1920, selling millions of records.

Why? Was he that extraordinary? I can’t say that I am an expert. I first knew Caruso through the persona of his mid-century equivalent, Mario Lanza, in the 1951 film “The Great Caruso.”

Now, a half-century of learning about, listening to, and seeing opera, I can say the fame is justified. There are many hurdles to be gotten over to hear this great piece of recorded performance, however. “Vesti la giubba” is instantly recognizable, the go-to image and sound of opera, quoted, adapted, monetized, parodied.

You hear it, your eyes cross, the stereotype leaps into your brain, and you’re done – turned off if you hate opera, numb if you’re a fan because you’ve heard it A THOUSAND TIMES. It’ a sad clown, he’s laughing, he’s crying. It’s Smokey Robinson’s inspiration.

Here’s the story: it comes from Ruggero Levoncavallo’s 1892 Pagliacci, written in the wake of the creation of the nitty-gritty, proto-Neorealist verismo genre, all about peasants getting stabbed, and such – triggered by the success of Mascagni’s Cavalleria Rusticana two years before.

In this case, the stabber is Canio, a professional clown (don’t have him work your kids’ birthday parties!) whose wife Nedda is a little loose. This drives Canio nuts, and at the end of Act 1, he sings these words:

It’s a powerful, effective aria in a fast-paced, muscular, expressive opera, Levoncavallo’s only hit but one of the most frequently performed operas in the world to this day. (Spoiler alert: everybody has a really bad show that evening, in Act 2. Like, worst show ever.) Like other signature tenor arias such as “Una furtiva lagrima” or “E lucevan e stele,” it’s lament, a tear-jerking self-pity party. And who doesn’t love that?

The piece is strong, but its ubiquity is due entirely to Caruso’s vocal prowess. (Louis Armstrong would listen to Caruso records, and they influenced his approach as a soloist.) He came along at precisely the right time for the recording industry. He seemed made for the recording studio. The process read his voice well – listen to a few opera recordings from the same period. They are stiff and stilted. Caruso transmits excitement. 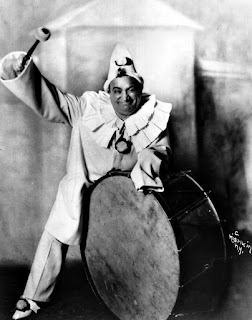 The first of Caruso’s three recordings of the aria in 1902, made only with piano accompaniment, made him a star. Yet he pushes hard in that release. He’s working at full volume, almost bellowing, certainly losing breath too soon during the final phrase. In 1904, he is much more relaxed and expressive, but still wobbly towards the end. By the time we get to this recording in 1907, the one selected for the Registry, Victor Records has sprung for orchestral accompaniment, the space Caruso in singing in is more resonant, and Caruso is more proficient and expressive than before.

It’s not just Caruso’s power – everyone had to project into large, echoing houses before the age of microphones. There is a kind of macho, competitive aspect to opera; Caruso ends up in many minds as the arts equivalent of Babe Ruth. It’s not his charisma, though he certainly had it. He is gifted with natural ability, but it’s the hard, highly skilled work he does with it that makes him memorable.

His voice is clear, ringing, with a quality of transparency as though he were singing THROUGH the note rather than on it. His diction is superb (at least in Italian; he essayed that and a couple of French roles; he sang Lohengrin in Italian, which must have been something.) He's smooth, turning lines into thoughts. Above all, his phrasing is rarely surpassed, because of his ability to make a deep emotional connection with his roles. Like Domingo, Chaliapin, and Callas, he can act as well as sing.

All these factors combine to make his singing still evokes a sense of immediacy, a “thereness” that is palpable. There’s a lot of thought going on in his performances; by serving the music, he elevates his work. And it stays fresh, through all the layers of association, that vitality comes through. And that, my friends, is the name of the game.