The NRR Project #10: ‘The Stars and Stripes Forever’ 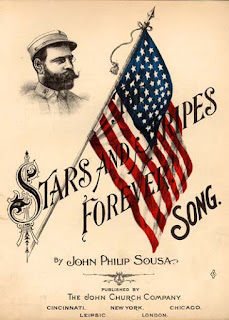 Chuck Klosterman recently wrote about John Philip Sousa, in connection with his recent story, “Which Rock Star Will the Historians of the Future Remember?”, published in the New York Times on May 23. I’d love to cut and paste the entire swathe of his meditation on Sousa’s significance and his place in popular culture – but there are copyright laws. Here’s a link – it’s right at the beginning of the story.

In essence, he asserts that Sousa is synonymous with the march, and stands for the entire genre in the public consciousness, the certainty of there being many more composers of the same kind in the historical records, or indeed thriving today. (You can imagine my surprise when, as a child, I found out that living people wrote hymns, too. I thought they were all whipped by Martin Luther with a guitar and some head arrangements about 500 years ago, and constituted the vocabulary of faith.)

“The Stars and Stripes Forever” is his emblematic work. Klosterman rightly makes associations with this tune and national holidays, the circus, and college football. This selection by the National Recording Registry features the first known recording of the march, on one of Emile Berliner’s disc recordings.

Sousa mastered a brisk, aggressive, yet decorous kind of music fit for the birth of the American empire, which began with our Latin American and Pacific interferences of the same era. These martial tunes, big bombastic blasts of bravado, exude the stereotypical idea of “American-ness” – energetic, optimistic, proud, naïve, and casually violent. His 4/4 rhythms incite the feet to tap, or march heedless of the destination. Music as propaganda.

There was no triggering incident that brought “The Stars and Stripes Forever” into the spotlight. It’s simply memorable. Its clever play with dynamics, the variant themes, that nifty little piccolo obbligato, and the roller-coaster buildups, smashes, and swerves in the piece as inherently fascinating.

Klosterman includes the circus in the associations he has of this tune, interestingly, it’s only heard at circuses, or theaters, when tragedies strike. Known as the “Disaster March,” it’s only played when life-threatening emergencies occur, as a signal to staff to help evacuate the audience. Of course, any disaster is probably made worse by throwing a Sousa march into the mix, but hey.

Of course, it’s the tune we hear when Popeye eats his spinach, gains strength, and saves the day. And, of course, as kids we all loved its variant, “Crazy Mixed Up Song,” aka “Be kind to your web-footed friends . . . “ That’s the price of popularity. This tune has been butchered by amateur bands more than any other, it’s been incorporated into countless cultural and commercial enterprises. For better or worse, it’s our theme song.