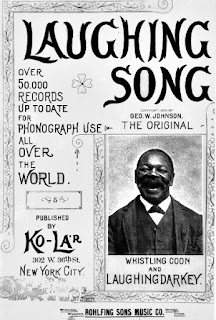 An innovative hit that’s irredeemably racist – it’s the American story in a nutshell.

Here’s the story. George W. Johnson, born into slavery in 1846. As a child, he’s paired with one of his master’s sons as a “bodyservant,” or playmate (kudos to Tim Brooks for his research, found in his book Lost Sounds). As such, he learned to read and write – a highly unusual skill for a black slave to possess, one for which the possessor was usually killed.

After the Civil War, he made his way north to New York City, where he became a noted street entertainer. His whistling skill and his ability to laugh, heartily, in time and in tune, brought him to the attention of early recording studios looking for a hit. In the spring of 1890, he began his limited but staggeringly popular career.

At the time, all recording was strictly an analog process. A performer stood in front of the large, morning-glory horn of the recording/playback machine and sang or declaimed as it scratched the vibrational pattern into the receiving medium on the machine’s revolving cylinder. No mechanical duplication had been devised.

Therefore, for 20 cents a crack, George W. Johnson, who had an iron constitution, great enunciation, and a resonant voice, sang and whistled into three or four machines at a time, over and over again, 50 times a day or more. He is estimated to have sold between 25,000 and 50,000 copies of “The Laughing Song,” which means at the very least he sang the song 6,000 times over 12 years.

The tune itself is jaunty and raggy. Johnson has a performer’s ease and energy. His enunciation (oddly, white culture’s condescending acceptance of African-American exemplars would include the phrase, “They’re so well-spoken,” as though complex conversation was beyond people of color) marks him as someone superior to his material.

The lyrics are staggering. He’s a “dandy darky” with a mouth like “a trap”. “He’ll be the King of Africa/ in the sweet bye and bye,” and the thought makes him laugh, which he does with verve. He sees himself as a figure of fun, as a safe, genial, weak-minded kind of oddity. White culture demanded that black men be turned into non-threatening buffoons. Johnson played into it, and made a fortune. His other big hit? “The Whistling Coon.” Ouch.

He made few friends with the police. He was a relatively affluent black man living in Hell’s Kitchen, at the time a desperately deprived neighborhood. He preferred the company of white women, also a huge problem for him at the time, and when one died in his apartment he was charged with murder. (His popularity may have helped his release.)

Eventually, technology caught up with him. By 1902, the mechanical reproduction of recordings was possible, and players only needed to be recorded once. Johnson became a doorman, stated drinking, and died in 1914.

His symbiotic relationship with white culture put him firmly in mind of the chasm between stereotype and reality in race and race relations, and he chose to please the crowd and go with the stereotype. Was he an Uncle Tom, or a savvy entertainer? What was worse – being a slave, or perpetuating humiliating assumptions that kept his people back?

At the same time, he was the first African American recording artist, and star. Did he owe anybody anything?