I don't do yahrzeits; or: good grief! 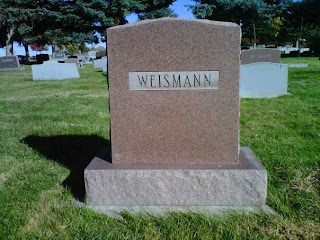 In case you were wondering what those are, they are a widespread and ingrained part of Jewish tradition.

It’s the observation and commemoration of the date of death of a close relative, spouse, or friend – parents, particularly. The kaddish (mourner’s prayer) is recited, a candle is lit, a palpable act of tzedakah (charity) is encouraged, and Torah can studied in honor of the memory of the deceased.

My mother died a year ago today. I have my share of problems about that . . . but commemorating it doesn’t help to solve any of them. (Yes I did say kaddish for her for 11 months. I’m not a complete monster.)

Maybe I don’t feel the pull of the ritual because I’m a relatively new Jew. I come from Lutherans, from the shady Christian hollows and hilltops of the Missouri River valley, Alexander Payne country, right around Omaha, where the blues are more commonly referred to as “our Scandinavian heritage.” It’s Garrison Keillor without the charm. Performed in stiff motions of despair.

In that primal culture, death is seen as a relief from earthly trials. More accurately, life is conceived of as one long “American Gladiators”-style competition against temptation, sin, and error. A vestibule crowded with a kaleidoscope of potential soul-destroying torments to be sidestepped.

Plus, we had this quirky family tradition of TAKING A PICTURE OF THE DEAD RELATIVE.

AND HANGING IT IN THE LIVING ROOM.

My paternal grandparents’ walls looked like they were hung with pictures of fallen Pez dispensers. This is not OK, I thought then but confirmed objectively years later. This kind of familial focus on the Grim Reaper explains much of my reluctance to memorialize the departed.

In fact, we spent our fair share of time in cemeteries, sprucing up our people’s plots, or just taking a drive out to visit that field full of unresponsive relatives. Out of boredom, I would run up and down as a kid, vaulting over the headstones, until my grandma caught me and scolded me out of it.

Dad’s death, 20 years ago, didn’t help. The first mortuary we went to, the guy started off by saying, “Well, what can I help you with?” We moved on. Later, the unfamiliar minister faked his way through Dad’s eulogy, throwing in a plug for the funeral home smack dab in the middle of it.

I did make a habit of visiting his grave on the Day of the Dead. I thought treating it as a festive occasion was at least a move in the right direction. And those visits did actually lead finally to a kind of peace for me. So, memorialization works.

But Mom got cremated. So . . . she’s out blowing around somewhere right now. That’s not comforting.

“Hey, remember that day Mom died?” is just not something I’m willing to entertain. It seems -- gauche.

Plus there’s the letter. I know it’s traditional, but I don’t want an ecclesiastical form letter reminding me of what happened, especially one containing a donation suggestion and envelope. Nope. Don’t like that.

So, smartass, I ask myself, how should you remember someone? I would pick out the nice bits to mull over, to start. That’s what I’ve been doing.

For better or worse, the parental influence is pervasive. I work in the arts, after a childhood my mother flooded with films, books, and music. I write; she wanted to. I read my kids Laura Ingalls Wilder with the same intonations Mom used. And we all seem to laugh in the same places.

So I currently choose just to remember the funny stuff. That’s what I can handle, that’s where I’m at. When I go, don’t light a candle or nail a little brass plaque to anything.

The teacher asks the class what their fathers do for a living.

Little Billy says, “My dad works at the grocery store!”

Little Jimmy doesn’t say anything. Teacher asks him, “What about YOUR daddy, Jimmy?”