Eargasm: ‘Feelin’ Alright’ and the mechanics of the listenable 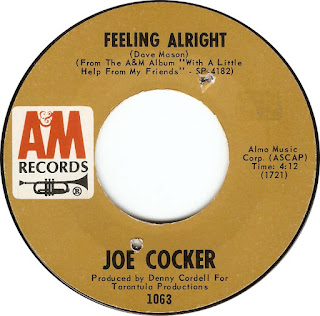 There is a name for that song that gets stuck in your head. Scientifically, It’s termed involuntary musical imagery, and a surprising amount of research has been done on it. It happens to 99 percent of us, and quite frequently. They are still working on a cure.

For me, it all started with Joe Cocker. I could not understand what the hell he was singing in his famous 1969 cover version of Dave Mason’s “Feelin’ Alright.” Thanks to my compulsive research skills, I found that it has reached “anthem” status, that it’s been covered by more than 40 artists, including:

The best running list of covers is curated by Mr. Mason himself, complete with full lyrics (although there are two variant sets even on Mason’s page), chords, and more on his website at davemasonmusic.com -- http://www.davemasonmusic.com/feelin-alright.

Mason wrote it in 1965 when he was 19; its first recording debuted on Traffic’s self-titled second album. (Mason had left the group right after making their first album “Mr. Fantasy” the year before, and returned just long enough to appear on “Traffic” before leaving again, this time for good.)

Dialing through all the covers of the tune I could track down, I found that age did not wither nor custom stale its infinite variety. How come I don’t get sick of it? What makes it work? A. Its funky, rolling rhythm, adaptable to many musical genres; B. Two chords! (C7-F7, kids) – Easy to transmit and perform. C. The call-and-response chorus and gospel-derived harmonics give it an urgent forward motion, no matter what the tempo; D. The breaks leave plenty of space for inventive, wide-ranging solos, and E. The plaintive lyrics are simple, memorable (once you understand the words), and the sentiments are universal.

It’s kind of a breakup song, rueful in the same way that “Don’t Think Twice, It’s Alright” is. However, it’s not accusatory and contemptuous. It’s a lyrical, flowing white-blues song. Although a girl is referenced, the subject of the song could be any situation or institution that needs to be left behind.

“Feelin’ Alright” delicately straddles the gap between the “earworm” quality of infectiously listenable hits such as “Louie Louie,” “You Really Got Me,” “Free Bird,” et al and the raise-your-lighters-high inspirational-rock-anthem category – “Hold Your Head Up,” Don’t Stop Believin’,” Dream On,” and all the other fist-pumpers.

In other words, it combines a strong basic structure with an inherent flexibility that allows for all kinds of musical colorings (and lyrical variations). I found a few versions that felt more compelling than Cocker’s classic take. Here they are:

This rare live version is from a compilation LP, “Badfinger: BBC in Concert, 1972-73” – Peter Ham’s lead guitar was never better. A swamp-rockish take --

GREAT a capella version from this university group!

The Bar-Kays were built from the ruins of the 1967 plane crash that killed Otis Redding and most of his backup band. The slow, deliciously horn-rich funk of this cover is distinctly reminiscent of the Stax Records style, where most of the group got their start.

Of course, the original recording. With Mason on lead, the vocals penetrate as they only can when the writer sings them. Chris Wood appropriately sticks a phrase of “It Ain’t Necessarily So” at the front of his horn solo. Jim Capaldi’s astonishingly crisp, rapid-fire riffs are tutorials in themselves!

Yes, a steel drum band. This 1977 cover takes the prize. Why? The guitar solo is not terribly inventive, and the mix needs serious work. I guess it’s partly the intense focus of the effort, and the unorthodox instrumentation. The drummer rides that splashy ‘70s cymbal so hard that it creates harmonic over- and undertones that encompass the performance and urge it on. The song marches at a brisk, uninflected pace, and the vocals snap out like firecrackers on the sidewalk.

The overall effect is that of turning the song into a warrior chant, an undefeatable and propulsive force of nature – just the thing one needs to hear when you need a little cheer and inspiration.